God Shed His Grace on Thee in Alexandria
Votes

God Shed His Grace on Thee in Alexandria 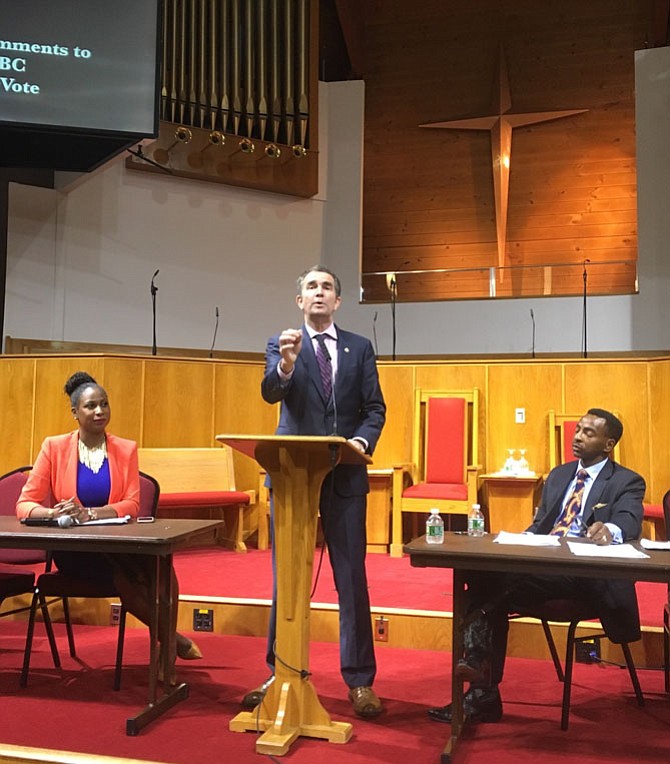 Goals of the Oct. 12 event included informing attendees about candidates’ platforms and increasing voter engagement and turnout. Speakers included 11 candidates, or their representatives, from a variety of local and state races.

The opening prayer appealed to God, “the Governor of all governors,” and concluded “in Jesus’ name.” Justin Fairfax, the Democratic candidate for lieutenant governor, said that his optimism for American politics derives from the fact that “God still sits on the throne.” Ralph Northam, the Democratic candidate for governor, mentioned his Baptist roots. And Elroy Sailor, representing Ed Gillespie, the Republican candidate for governor, cited “the Good Book” in vouching for Gillespie’s character. Gillespie, a Catholic, has said, “I believe we’re all created in the image and likeness of God.”

While the event was nonpartisan, its de facto hue was blue.

Seven of the 11 speakers were Democrats, plus another “progressive independent.” The reason is partly that the lower end of the ticket includes no Republicans or otherwise right-leaning candidates, except Mike Webb for the Arlington County School Board. Webb, though running as an independent, ran for office previously as a Republican. Though invited, none of the five Republican or Libertarian candidates for offices pertaining to Alexandria and Arlington attended; only Gillespie sent a representative.

Some attendees said their top issues included Black Lives Matter, President Donald Trump, gun violence, climate change, the school-to-prison pipeline, education. One said “taxes” but didn’t expound. Asked when Virginia would “do the right thing” by lifting certain aid restrictions, Del. Mark Levine (D-45) said, “When we have 51 Democrats in the General Assembly.” Many in the audience applauded and laughed. No one asked about certain flagship Republican issues, like curtailing government spending or abortion.

The event’s de facto partisan lean comports with broader trends. Fully 80 percent of historically black Protestants — the religious tradition into which ASBC falls — identify as or lean Democrat, according to the Pew Research Center’s 2014 Religious Landscape Study. Additionally, ASBC’s pastor, has weighed in on political issues, such as by favoring gun reform legislation. And the Obama family has attended ASBC services several times.

The only two conservative speakers — Webb and Sailor — are black. So is Adam Roosevelt, who, though he did not attend, is the only Republican candidate in any of Alexandria and Arlington’s House of Delegate districts. Only two black Democrats spoke at the forum, one of whom stood in for Del. Alfonso Lopez (D-49), who is not black. The other Democratic speakers were white men, albeit who specifically addressed racial equity: Bryan Porter, the Commonwealth’s Attorney for Alexandria, and Attorney General Mark Herring both said they’re proud of minority hiring in their offices.

Webb supports charter schools and said that Arlington’s worst performing high school is also its most diverse. Sailor, a businessman with an established GOP pedigree, said there was time when black people were not allowed to own guns, and that he’s “grateful” he learned to shoot and defend his family.

Sailor went further at a 2014 Conservative Political Action Conference, where he and Gillespie were co-panelists. “Let’s not be afraid to talk about gun rights, the life issue,” he said. “Abortion has been worse on the African American community than the slave trade, than Jim Crow, ever [were].” In 2014, the latest year for which Virginia Department of Health data is available, 8,100 of 19,000 induced terminations of pregnancies in Virginia were black. Terminations occurred at a rate nearly three times as high among black women as among white women. Sailor also supported privatizing Social Security, since black life expectancy is relatively short, he’d rather have earlier access to more of his money. And he supported charter schools and vouchers, lamenting the limited options his siblings had while growing up in Detroit.

This departure from Democratic planks is also not out of step with broader trends. While 80 percent of historically black Protestants identify as or lean Democrat, only 24 percent claim a liberal political ideology while 36 percent claim a conservative ideology, according to Pew’s Religious Landscape Survey. Some of their views lean heavily Democrat. For example, 66 percent think that “Government aid to the poor does more good than harm.” But other of their views are mixed. For example, 52 percent oppose same-sex marriage and 42 percent say abortion should be illegal in all or most cases.

The closing prayer beseeched God that “the hearts of the people might vote the will of your kingdom.”