The festive tradition comes alive with community pride and hospitality. 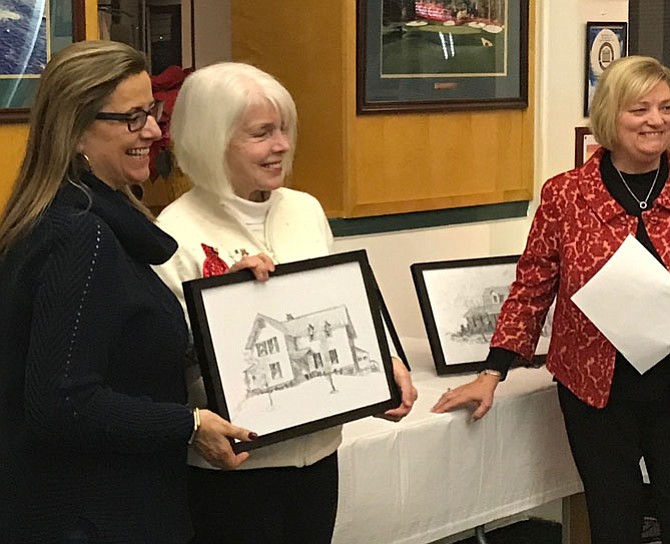 Patti Kelly, owner of 106 Monroe Hill Court accepts the pen and ink drawing of her home created by local artist Pat Macintyre during the reception held for the five homeowners whose properties were featured on The 2017 Holiday Homes Tour of Herndon. Homes Tour committee Co-chair, Susan Anselene looks on. Photo courtesy of Keven LeBlanc 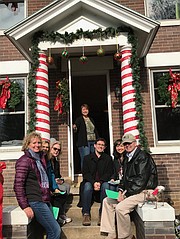 Three smiling polar bears helped decorate the home of Mary and Kim Hamlin in a bright and merry Christmas manner, adding touches of fun and whimsy. Their home was featured on the 2017 Herndon Holiday Homes Tour.

The Town of Herndon kicked off their ‘Hometown Holidays' celebrations with the Holiday Homes Tour of Herndon held Saturday, Dec. 2, 10 a.m.-4 p.m. Planned and produced by the town’s Cultivating Community Initiative (CCI), the time-honored and much-anticipated tradition debuted in 1979. The daylong ticketed event allowed the public an opportunity to experience firsthand some of Herndon's most festive homes decorated for the holidays, many located in the Historic District.

Members of the CCI’s Homes Tour Committee selected the five featured properties based upon historical, architectural or community interests. Local artist Patricia C. K. Macintyre whose pen and ink drawings of the homes were gifted to the owners explained that the houses selected came from a diversity of eras and architectural styles. "Yet always so warm [and] decorated for the holidays," Macintyre said. "True family homes. Some are stately, proud from Herndon’s early days; some more contemporary." According to Macintyre, each home stood ready to inspire visitors with ideas to incorporate into their own way of living.

Connie Hutchinson was a docent at the home of Kristin and Shane Eddy, 630 Oak St. Hutchison spoke about the unique historical aspect the home offered tour-goers. “It’s wonderful to have this particular home on the tour because of its connection to the town’s history as a summer retreat for folks coming out from Washington, D.C. This home was a boarding house at the turn of the century,” Hutchinson said.

Steve Mundt took part in the event as a tour-goer. Waiting on the porch at a featured home with a group of friends, he spoke about this year’s tour and what he liked best. “The way the decorations and the history of the town are interwoven makes this tour fantastic,” Mundt said. Nancy Crosby waited in the same group. “The decorations of the houses reflect the families who live there. It makes you connected to the town,” Crosby said.

Keven LeBlanc and Susan Anselene co-chaired the 2017 Homes Tour Committee. In their message in the tour brochure they wrote, "This tour would not be possible without our homeowners, who generously share their beautiful homes and the many individuals in our community who support the tour in numerous ways."

INCLUDED in this year's self-guided tour was the home of Tim Bonnet and Kimra Traynor at 904 Elden St. They filled their home with bright, bold colors and decor, which reflected an eclectic blend of history and modern elements in their 100-year-old stately brick home.

Julie and Jeff Johnson, at 1412 Cuttermill Court, chose traditional, beach, outdoor and art themes as holiday decorations for their 1999 home located in a neighborhood of beautiful trees.

Kristin and Shane Eddy, at 630 Oak St., garnished their circa 1901 boarding house turned private residence with rustic natural holiday decorations such as pine cones and evergreens creating a holiday retreat that complimented the ambiance of the period home.

Mary and Kim Hamlin, 301 Missouri Ave., decorated in a bright and merry Christmas manner, adding touches of fun and whimsy as evidenced by their colorful Christmas trees and decorations like their smiling polar bears.

Patti Kelly and family, 106 Monroe Hill Court, enhanced their circa-1850 “New/Old Farmhouse” with traditional Christmas elegance. Greenery and wreaths abounded adding to the holiday spirit. Kelly's goal was to bring the home into the new millennium while respecting and retaining its character.

PROCEEDS FROM THE TOUR will support the many Herndon civic organization whose participation allowed the Homes Tour to occur. The organizations include the Order of the Eastern Star, Herndon Historical Society, Herndon Woman's Club, Herndon Fortnightly Club and Rotary Club of Herndon.

Volunteer members of each participating civic organization acted as docents, greeting the tour-goers and welcoming groups into the private residences. Docents called attention to the seasonal decorations and recited fun facts and historical stories of these magnificent homes and the people who have lived in them.

For instance, at the home of Patti Kelly, docents noted the cascades of greenery and swags that decked the halls. They also took time to explain how the Kellys are only the fourth family to own the 160-year-old house and how the home initially passed through the hands of Smiths of D.C. who built it in the 1850s, the Younts who in the 1860s turned it into a dairy farm, and the Paynes who purchased it in 1968 from descendants of the original Younts family and then sold it to Doll Homes in 2006. Doll Homes then moved the house off its original stone foundation in 2012 and sited it down the hill as part of their development for Monroe Hill Court. In 2014, Patti Kelly and her family bought the property.

In a prepared statement, Homes Tour Co-chair Leblanc wrote, “It has been an honor to serve on the Herndon Homes Tour, to become friends with the homeowners who graciously invite our neighbors into their homes at this special time of year. It shows that no matter what is happening in the world, our community comes together."