Honoring the Past and Present
Votes

Honoring the Past and Present

A home with both a rich history and modern conveniences is on the market in Fairfax. 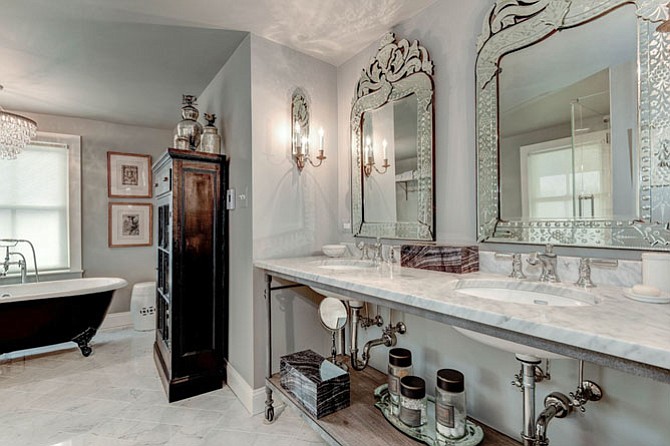 Carrera marble countertops, custom-glazed, white, wooden cabinets (some with cathedral-style glass), a cherry wood island and a decorative farm sink by Kohler are among the amenities in the kitchen of this Fairfax home.

The owners of this antebellum home in Fairfax updated it with modern conveniences while maintaining its architectural integrity.

When Betsy Rutkowski purchased her Fairfax home, she was drawn to its rich history and the childhood memories which it evoked.

The antebellum home, named Aspen Grove, dates back to the 1700s. It was once owned by William Jefferson Sagar and his family who vehemently opposed slavery. In fact, during the Civil War, the Sagar family fled to New York seeking refuge from the fighting and unrest in Virginia.

“We modernized it but maintained the integrity of the original features.” — Betsy Rutkowski

During the war, the home was occupied by both Confederate and Union soldiers, and even sustained fire damage. The Sagar family spent years restoring Aspen Grove before selling it in 1920.

While Rutkowski has a great appreciation for Aspen Grove’s storied past, she recognizes the sensibility of modernization. It is this notion that guided the decisions she made while renovating and updating the four bedrooms, three-and-a half-bathroom house.

“It feels very modern even though it’s historic,” said Rutkowski. “We modernized it, but maintained the integrity of the original features.”

Rutkowski says that she has hosted hundreds of charity events at Aspen Grove, but the most memorable occasion was her stepdaughter’s wedding and reception. “It was wonderful. The outdoor entertaining space is phenomenal. We’re able to entertain on the large front porch,” she said. “The inside has a good flow, which you might not expect from an older home.”

Rutkowski and her husband have decided that it's time to say goodbye to Aspen Grove. “We lived in London briefly and we got the urban bug,” she said. “We want to downsize and move into Washington, D.C. We have two grandchildren who live a mile and a half away from our home, but we’re hoping to move to a place with Metro access.”