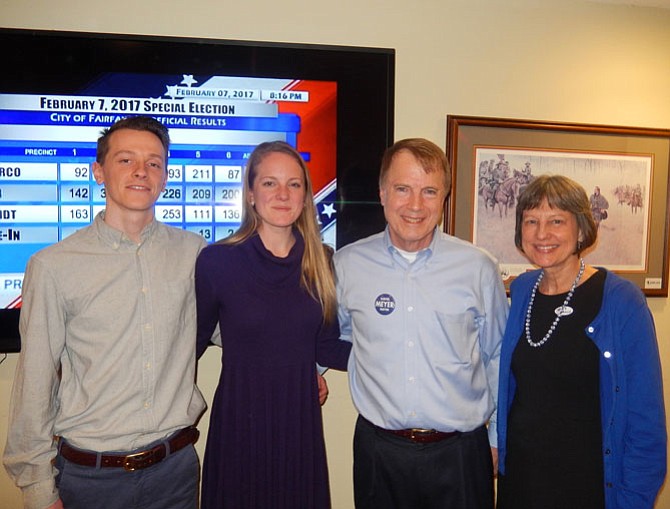 Fairfax — The voting is over, the ballots have been tallied and David Meyer is the new mayor of the City of Fairfax. A 35-year City resident, he was currently serving in his fifth term on City Council and ran against fellow Council members Michael DeMarco and Ellie Schmidt.

They vied in a special election Tuesday, Feb. 7, to fill the post vacated by former Mayor Scott Silverthorne last August. Since then, former Councilman Steve Stombres has served as the City’s interim mayor. The unofficial election results are expected to be certified by Friday, and Meyer will be sworn in next Tuesday, Feb. 14.

All three candidates had campaigned since the fall, and Meyer won easily in a contest that turned out not to be as close as many people had expected. Of the 3,901 votes cast, Meyer garnered 1,644; Schmidt 1,190 and DeMarco 943. There were 124 write-in votes. In a City of approximately 15,000 registered voters, that’s about a 26-percent turnout.

A standing-room only crowd gathered at Historic Blenheim to await the results and cheer on their favorites. And by the time half the precincts plus the absentee votes were in, Meyer had already opened a 300-vote lead over his nearest challenger, Schmidt. He ultimately won by 454 votes. The final vote totals came in shortly after 8 p.m. – just an hour after the polls closed.

“We have a mayor, but we have no losers here,” announced Commissioner of the Revenue Page Johnson, emceeing the election-night gathering. “All three candidates ran a forthright, honest and genial campaign.”

Thanking her family, friends and supporters, Schmidt said, “We’ll all continue to work together for this great community.”

DeMarco said his son told him, “Dad, I still love you.” He then thanked his family and everyone who’d supported any of the candidates, adding, “Congratulations to David; I will support you as much as possible.”

ADDRESSING THE CROWD, Meyer said, “People care about this City.” He also noted that the high voter turnout “in an off-year, nonpartisan election speaks volumes. People are hungry for progress, and it’s time to move this City forward.”

Acknowledging Stombres’s efforts on behalf of Fairfax, Meyer said, “In a time of great leadership crisis, we looked to someone to provide calmness, leadership and maturity. [Now] it’s time to collectively celebrate what’s good about this City, and this election today was a great celebration of what a democracy is about.”

Meyer’s wife Cindy, daughter Louisa and her husband Murphy Protzman joined in the festivities. The Meyers’ son Elliot was away, hiking the Appalachian Trail, but he helped with his father’s campaign Website.

Happy about her dad’s victory, Louisa – a 2008 Fairfax High grad whose birthday was Feb. 7 – said, “It’ll be a challenging venture for him, but he has a lot of new ideas to bring to Fairfax, along with lots of experience. It’ll be a positive move forward for the City.”

David Meyer said he was “never really certain how the voters would respond [to this election] because of all the uncertainty that’s surrounded the City for the last six months. But I believe these results reflect a deep desire by the citizens to put the past behind us and get serious about addressing the challenges we have as a city. These include increased traffic on residential streets, underperforming commercial centers in different areas of the City and determining what is an acceptable tax rate for residential properties.”

Furthermore, he said, “In the campaign, I made a commitment that we were going to address housing, including senior and affordable housing. I want to incorporate our affordable housing policy into our Comprehensive Plan and investigate the possibility of working with a nonprofit to develop an affordable housing project in the City. We also need to improve our housing stock by revitalizing existing homes and having high-quality, new homes in the City.”

AS FOR HIS MAYORAL WIN, Meyer attributed it to the fact that he spends a great deal of time with the residents and establishes relationships with them. “I get to know their personal histories and their dreams for the City, and I listen,” he said. “I also ran a campaign right up the middle politically to bring in as many people as possible. And we’re going to need all these people to develop consensus to deal with some serious challenges we’re having regarding redevelopment, strengthening our tax base, housing and creating new centers where people can live and work.”

Similarly, he said his first priority will be to forge a consensus on the Council, too, as to how to deal with these issues. “We have good, talented, knowledgeable and dedicated Council members, and my task is to make sure every voice is heard. And hopefully, we can work together to complete the Comprehensive Plan, jumpstart the Scout on the Circle project and do some long-range planning to address the future of Northfax.”

Meanwhile, as the outgoing mayor, Stombres said, “I want to congratulate David on his victory and thank Ellie and Michael for their dedication to our community. I know the new mayor and council will work together in a collaborative way to deal with the challenges facing our community.”

“It’s so nice to live in a community where friends and neighbors can resolve differences in a positive manner because everybody has the best interests of the City at heart,” he continued. “And I’m proud to be a resident of the City of Fairfax. I also thank my wife and family for their support while I had the honor of serving as mayor. I was thrilled to be mayor, but I’m even happier to turn it over to David.”