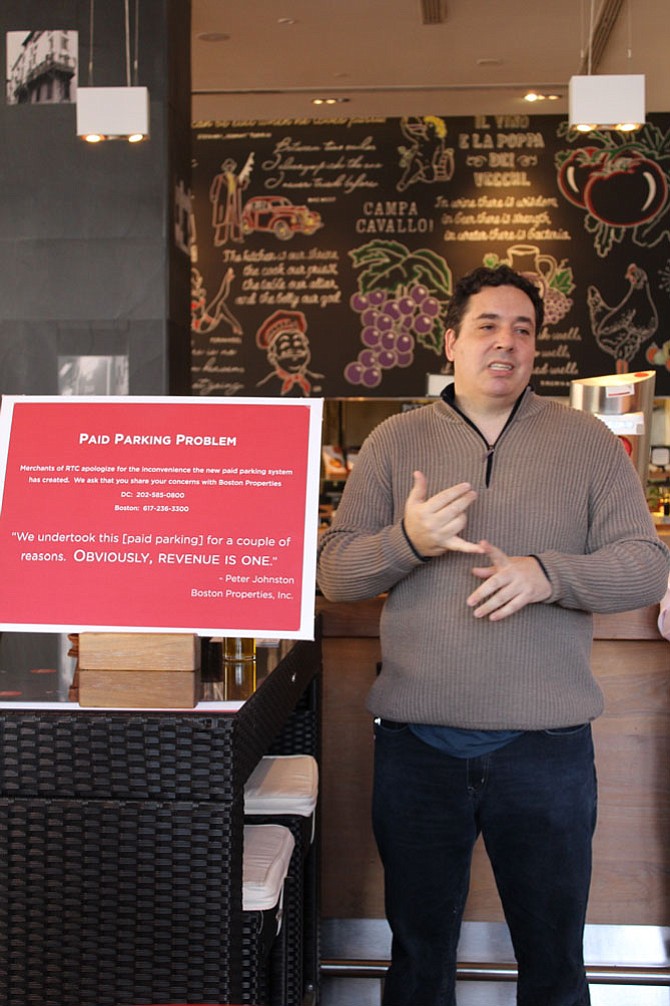 Aaron Gordon of Gordon Food Group and the proprietor of the Red Velvet Cupcakery on Democracy Drive, is one of the merchants who is leading the charge against Boston Properties. He encouraged all the merchants to display this red sign in their windows, which says, “Paid Parking Problem: Merchants of RTC apologize for the inconvenience the new paid parking system has created.” Photo by Fallon Forbush. 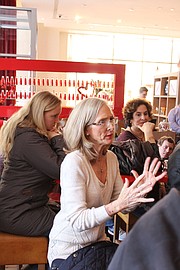 Lisa Capalbo, an employee of a store on Market Street, voiced her concern that she felt her store was being pushed out of the town center. 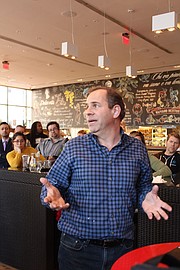 Mark Clyman of the Reclaim Reston offered his group’s support to the merchants in their fight against paid parking.

Robyn Hanna, COO of Edibles Incredible Desserts told a gathering of town center merchants that employee turnover has been “rampant” since paid parking went into effect, as the store’s CEO, Alan Furman, looks on. 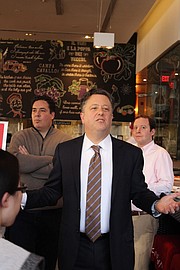 Paul Thaler, an attorney with the Cohen Seglias law firm, offered to represent the merchants in their fight against Boston Properties while standing in front of two of the most vocal merchants, Aaron Gordon of Gordon Food Group and the proprietor of the Red Velvet Cupcakery, left, and Aaron Mervis, vice president of the Big Bowl restaurant, right. The group of merchants eventually decided to hire the Fay Law Group.

Elizabeth Krial posted this photo of an immobilized car to Facebook on Monday, Feb. 13, with this caption: “BITTEN BY THE YELLOW BARNACLE!! Nothing says, ‘Welcome to the Reston Town Center’ like a bright yellow immobilizing device on your vehicle’s windshield. Oh … happy Monday!! Poor guy. What a way to start of the week!!”

Restonians are revolting against paid parking at Reston Town Center.

Boston Properties, which owns and manages the buildings in the town center, implemented the pay-to-park system on Jan. 3. After a month, merchants organized on Monday, Feb. 6, at the center’s Vapiano restaurant to discuss possible actions they could take against Boston Properties, including legal actions.

“Unfortunately, many of the most vocal people who are speaking out and speaking to the media representing Reston Town Center retailers, many of them are employees rather than owners,” said Kathy Walsh, a spokesperson for Boston Properties. “Boston Properties has had a number of discussions with owners and senior managers who actually have indicated they do not share their employees’ views or approve of their behavior in response to paid parking.”

There were many owners and managers at the meeting at Vapiano.

“This paid parking situation is killing us,” Aaron Gordon of Gordon Food Group and the proprietor of the Red Velvet Cupcakery in the town center, said during the meeting. “It’s hurting our reputation and hurting the reputation of the town center as a whole.”

Gordon’s business was down 25 percent in sales the week prior to the meeting, he said. And the customers who are not turning away from buying his cupcakes at the town center complain about the prices and often blame his business.

“People have been coming in, half of our customers that are still left, and bitch and moan to us — which they have every right to do — and say, ‘Why did you do this?’ A lot of people actually think we’ve caused this problem.”

He said his business cannot validate parking, even though his customers ask.

This was the tune for a lot of the proprietors who voiced concern during the meeting.

“At Big Bowl, we were down 10 percent in sales [compared to same time last year] … We were down 1,200 customers in January,” Aaron Mervis, vice president of Big Bowl restaurant in the town center, said at the meeting. “We also spent $1,600 on parking validation for guests.”

“We’re down a substantial amount of business over at World of Beer,” Evan Matz, the restaurant’s owner, said at the meeting. “Patrons will come in and they’ll ask if they can validate and of course we can’t afford to validate for them because our ticket items are so low.”

Matz said that customers are changing their behavior and spending less time perusing the town center to avoid high parking fees, which is hurting his business.

NUMBERS AT THE BIKE LANE cyclist shop are also suffering, according to its owner Todd Mader.

“Our concern is how much damage has been done with our customers?” he asked the crowd. “If we were to magically get this repealed tomorrow, I don’t think it would go back to the way it was, at least not at first.”

But he hopes he can make up the lost business on weekends, which are the busiest times for his shop when garage parking is free.

Lisa Capalbo, an employee of a store on Market Street in the town center, voiced concern that her store and other businesses are being pushed out. She refrained from providing her employer’s name because she does not represent the company, though her employer also attended the meeting.

There were 68,000 parking visits in January, according to Walsh, who would not provide the revenue earned from these sessions.

This winter’s unseasonably warm weather has been a boon for Ray Pugsley’s Potomac River Running stores, but not at his town center location.

“This weather is fantastic for us … all of my other set of stores are up somewhere between 10 and 15 percent in the last 30 days,” Pugsley said at the meeting. “This store here is down 4 percent … We’re not down that much but that’s because it’s ridiculous weather for us.”

Potomac River Running facilitates fun runs and running seminars throughout the week for its customers. The customers who participate in these events cannot get parking validation because they usually don’t make purchases, Pugsley said.

As a result, his Reston Town Center store will no longer host events, which were very popular before paid parking went into effect.

“We’ve canceled them all and we’re moving them to other stores,” he said.

The silver line of the metrorail was a big factor in Boston Properties’ decision to implement paid parking, according to Walsh.

“Over the past three years, Boston Properties has really been tracking usage patterns and literally tens of thousands of people were using Reston Town Center garages for short- and long-term commuter parking, including overnight and out-of-town stays that created a shortage of spaces for tenants and visitors to the town center,” Walsh said.

However, it doesn’t appear many parkers are willing to pay for extended parking. In fact, the average transaction is $4.67, which equates to a little more than 2.5 hours, according to Walsh.

SOME OF THE MERCHANTS say they plan on ending their leases as soon as possible. But, Deidre Castronovo, the owner of PR at Partners salon, told the group that she recently signed a 10-year renewal and may have decided otherwise if she knew about the switch to paid parking.

But Walsh said there is no excuse for retailers who are claiming they weren’t aware of paid parking or the possibility for paid parking before they signed their leases.

“Parking language is built into every lease,” Walsh said. “Any renewing or new tenants should have been fully aware of the possibility of paid parking. There have been ongoing communications releasing details of the paid parking since last January [2016].”

Since the meeting, the group has hired the Fay Law Group to examine the merchant’s leases.

Though litigation will be a tough fight if they choose to go that route.

“[Boston Properties] relied on both internal and external legal counsel to thoroughly review every lease and they are very confident in respect to their decision to implement paid parking,” Walsh said.

The troubled merchants’ firm will also organize them into a unified association.

“It’s important for us to have a unified voice,” Gordon said. “We should have about 50 to 60 merchants in what we’re calling the Reston Merchants Association by this Thursday.”

The decision to organize and seek legal counsel was made after Boston Properties denied their request to provide free three-hour parking validation for all visitors, Gordon said.

“While Boston Properties is confident that paid parking is going to stay, the reality is the paid parking model has only been activated for [8] weeks,” Walsh said.

As Boston Properties monitors the impact, they will assess whether modifications are necessary, she said.

Members of the public also attended to show their support of the merchants’ fight against paid parking.

“We are on your side,” Mark Clyman, member of the Reclaim Reston group, said during the meeting.

A “Park Free RTC” protest march is planned at the town center for Saturday, March 4.

Gaurang Shah, who lives in the town center, is organizing the protest.

Shah is also the organizer of the “Reston Social Scene” and “iSocial” Meetup groups in Reston, which have about 5,000 members combined.

He said his successful social functions are now struggling since paid parking was implemented. Members of his groups encouraged him to take action.

But the protest march will be tricky, since the town center is private property.

THE PROTEST will be meeting at undisclosed public locations around the town center, which will be published on the Facebook event page closer to the date. This is because Shah and other organizers are still working on attaining permits and they don’t want to tip off Boston Properties to their plans ahead of time.

Still, he plans on leading protesters on a march through the town center.

“Boston Properties doesn’t own the streets,” Shah said. “If we don’t stop at any point, we can walk in the town center. We’re not going to stop anywhere or block traffic.”

“We are kind of worried, so that’s why we’re talking with the local police department to make sure all of the protesters are escorted by police,” he said.

Elizabeth Krial, a 20-year Reston resident, is also helping with the protest.

“It’s not just about the businesses,” Krial said. “It’s now about the fact that this is unraveling the fabric of our community. This is where people would come together and let their kids run around and play and walk their dogs and meet friends. That’s not happening anymore.”

She blames the parking policy and the aggressiveness of the enforcement.

ORGANIZERS are encouraging protesters not to park at the town center, even though the garages are free on weekends.

“If the protesters do choose to park over at the Reston Town Center, they need to park in the garages because parking along the street is still not free on Saturdays,” Krial said.

While Boston Properties has not received sales information from all merchants for the month of January, the data they received does not show that all stores experienced decreased sales, according to Walsh.

“[The data is] just not aligning with some of those claims that retailers are making that sales are going down,” Walsh said.

The Connection asked for the full data, but was told that it could not be provided.

While a vocal Reston is opposing the paid parking, Walsh insists the switch was always in the plans.

“Paid parking was always in the plans for Reston Town Center since its inception,” Walsh said. “Although it’s recently been activated, it’s something that was always on the radar and that they were always planning to implement at some point.”