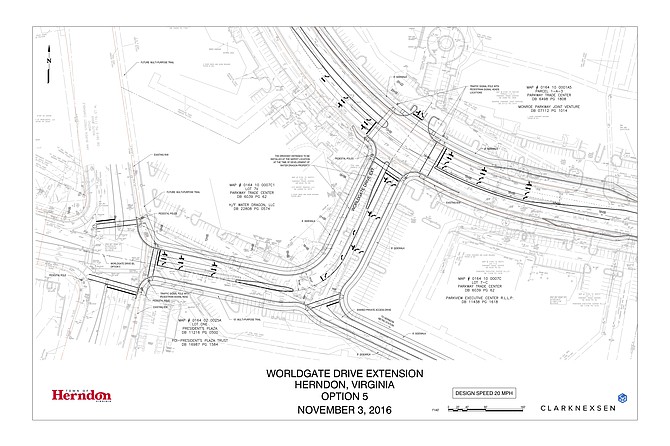 This option, Option 5, was the preferred location for the new roadway. There were four other options that private property owners and town staff considered before the fifth option was presented to the Herndon Town Council, which unanimously approved the plan. Map provided by Robert Boxer

A concept plan to extend Worldgate Drive from Van Buren Street to Herndon Parkway was approved by the Herndon Town Council during its last public hearing on Dec. 13.

Worldgate Drive currently dead ends into Van Buren Street. The extension is an element of the town’s redevelopment plans for the area near the new Silver Line Herndon Station on the Washington Metropolitan Area Transit Authority’s metrorail. The station is located directly southeast of the extension on the Dulles Access Road.

The new road will be a four-lane divided road that will provide additional needed capacity surrounding the station. The project will include 8-foot sidewalks, a 10-foot multi-purpose trail and sidewalk lighting.

While the adjacent property owners agree on the location, the specifics of the roadway are still being debated.

“We find the proposed Worldgate Drive Extension overly burdensome to our development potential,” James Policaro, senior vice president of development and construction for Lerner, said in a letter that was submitted to the town council just hours before it deliberated and unanimously approved the resolution.

Policaro represents the property owners of the Parkview Executive Center at 593 Herndon Parkway, which is located directly to the east of the extension.

“In summary, we request that the resolution provide for maximum flexibility in the design of the proposed Worldgate Drive Extension in order to minimize impacts to the future development of the properties affected by this roadway extension,” his letter continued.

During the hearing, council members were assured that flexibility would be provided to property owners, who are the primary drivers of the area’s redevelopment.

A clause was included in the resolution that was intended to provide “wiggle room and flexibility” for property owners, says Herndon’s Director of Public Works Robert Boxer.

It reads: “Final engineering for the Worldgate Drive Extension will insure that adequate access is provided to properties abutting new Worldgate Drive, both for the ultimate redeveloped state, as well as for potential interim conditions.”

“In other words, this is just a schematic essentially … that will require final engineering,” says Boxer.

Further traffic studies will be needed to finalize the exact details of what the new road will look like. The comprehensive plan simply sets a footprint for where the extension should go. The plan does not even show access points into properties or lane widths.

Right now, the town does not even know what the owners plan to do with their properties.

“When [the private property owners] decide that they want to come in and submit a development plan for redevelopment, they will be required to do a traffic impact study,” says Lisa Gilleran, Herndon’s director of Community Development.

The study will determine the amount of traffic that will be generated by the redevelopment and will indicate where the entrances and exits to the development are located.

The metrorail station is not slated to open until 2020, so it could be several years before any proposals for redevelopment are submitted.

“This is really preliminary planning work so that we’re in the forefront and we’re ready to respond when development plans are submitted in the future,” Gilleran says.