Final steps near as the Town and Comstock come closer on the sale of the property. 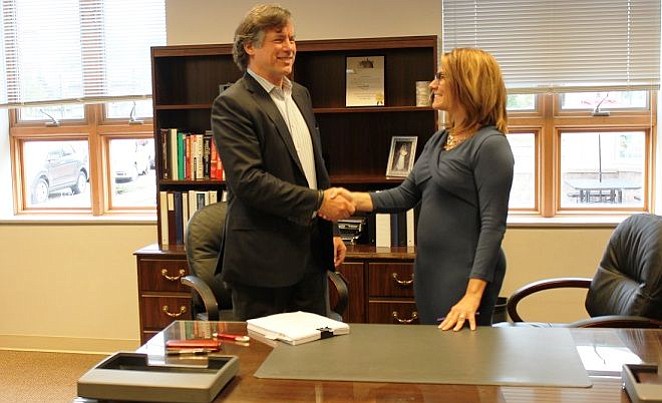 In the fall of 2017, Larry Bergner, Comstock Senior Vice President of Development shakes the hand of Town of Herndon Mayor Lisa C. Merkel. Comstock Venture LC and the Town of Herndon moved forward with a signed Comprehensive Agreement, which defined responsibilities of both parties in the redevelopment of 4.675 acres of town-owned land in Herndon’s downtown into a mixed-use project. Photo courtesy of Town of Herndon 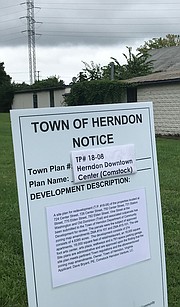 Signs like this one have recently sprouted throughout the area for the Herndon Downtown Redevelopment Project.

This story is the second in an ongoing series on the Proposed Herndon Downtown Redevelopment Project. The first story in the series appeared in the August 1-7, 2018 edition of the Oak Hill Herndon Connection.

Small white signs by the Town of Herndon recently sprouted up like mushrooms throughout the area for the Downtown Herndon Redevelopment Project.

"Comstock has submitted its site plan for the Downtown Redevelopment Project to the Town of Herndon for its review," wrote Maggie Parker, Senior Vice President, Public Relations, Comstock Companies on Sept. 17, 2018, when asked about the meaning of the signs.

“The Comstock site plan is currently under review by the Department of Public Works, Community Development and the Fairfax County Fire Marshal to ensure that it meets all engineering, stormwater management and zoning regulations, proffers and Fire Code requirements,” said Elizabeth M. Gilleran, AICP Director of Community Development for the Town of Herndon in a written interview.

"All existing easements, as well as needed easements and dedications, will be identified, preserved or obtained as necessary and plats and deeds processed. Bonding and escrow amounts will also be determined and assessed," wrote Gilleran.

EARLY THIS SUMMER, citizens with property interests in the land across the street from the Redevelopment project filed Appeal Notices, which rendered previously approved Certificates of Appropriateness granted to Comstock by the Town of Herndon Heritage Preservation Review Board void.

On July 13, 2018, Comstock gave notice to David Stromberg, Town of Herndon Zoning, of its withdrawal of Applications for Certificates of Appropriateness to the Town of Herndon Heritage Preservation Review Board.

However, neither the appeals nor the withdrawal of the applications by Comstock voided the 2017 Comprehensive Agreement that was negotiated between the town and Comstock and approved by Town Council. That agreement remained in effect and reflected elements of the proposal Comstock submitted in response to the town’s Request for Proposals (RFP). In other words, the proposed project was still on; it just took a step backward.

By the terms of the agreement, and cited by the town, Comstock would provide 339 public parking spaces in a parking garage, the shell of the arts center facilities, not its build-out, the arts center's temporary facilities during construction, other public space improvements and a $505,000 recreation proffer.

What happens next is that Comstock will continue to work with the town on approval of its site plan, application for certificates of appropriateness, bonding and building permit. Then the two parties go to closing and the property ownership transfer.

Delays are reasonable and often expected. Elizabeth M. Gilleran, AICP Director of Community Development Town of Herndon, wrote. "Site plans usually require more than one submission as there are almost always technical questions and corrections that need additional calculations or other revisions.

“Once all of the site material has been reviewed and determined to be accurate, and bonding has been received, then the applicant (Comstock) can submit an HPRB (Historic Preservation Review Board) application for Certificates of Appropriateness,” added Gilleran.

AS FOR ARCHITECTURAL PLANS, Gilleran said that while Comstock can submit their architectural plans for a building permit at any time during this process, the permit cannot be approved until the Historic Preservation Review Board has acted.

"The approval of the site plan, along with the approval of our applications (not yet submitted) to the Historic Preservation Review Board are the two key milestones needed to allow us to go to closing," wrote Maggie Parker.

In other words, the Redevelopment Project requires two key boxes to be checked, the site plan approval and the granting of new certificates of appropriateness before the two parties, the town and Comstock can go to closing and settle on the purchase. Until then, the property remains owned by the town.