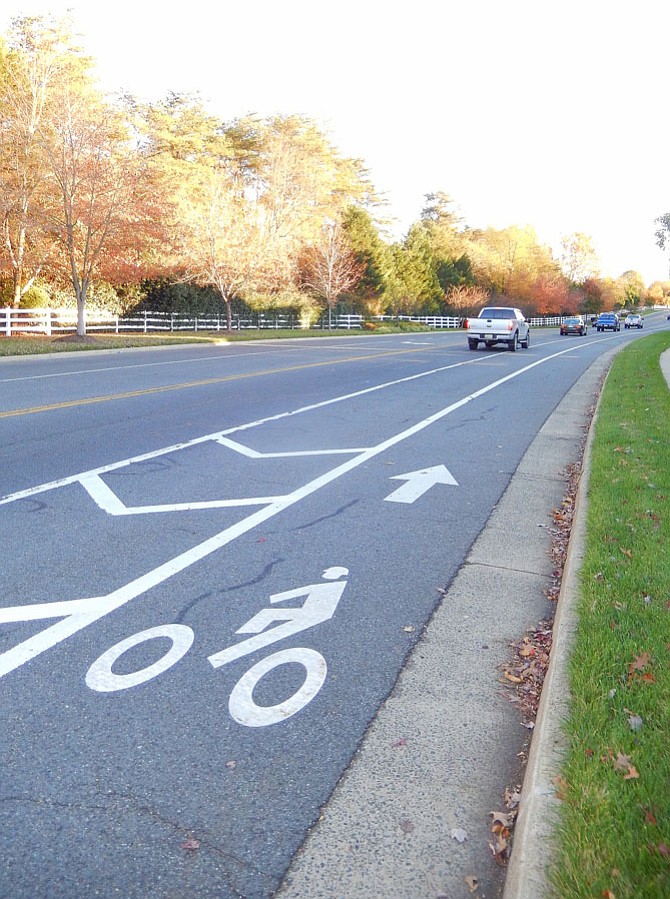 Centreville — The Fairfax Alliance for Better Bicycling (FABB) is an all-volunteer group that advocates for more bike lanes, bike trails and neighborhood connections. Formed in 2005, it wants to improve the opportunities for people to bike to work, shopping and other places in their everyday lives.

“It helps communities be more effective in advancing their bicycling priorities, such as getting a new bike lane or trail,” said FABB Board of Directors member Douglas Stewart. “We’ve also been active in getting better, safer bike routes to schools. For example, they might need a trail connection or bike racks. We also have a bike-light giveaway program, working with churches and other partners.”

He and others spoke recently at the Sully District Governmental Center about planned bicycle improvements in that district. Basically, said Stewart, “We’re about making bicycling safer, more fun and easier in Fairfax County. And often, we need better infrastructure to make that happen.”

For example, he said, “We’ve been advocating for a parallel bike trail along I-66 in Fairfax County, and it’s now in the plans. We’ve also been working to get a bike-parking ordinance enacted in commercial developments so, when they’re built, they’d have to include bike-parking areas and racks.”

Fairfax County Bicycle Coordinator Adam Lind noted that, in 2014, the county approved a $1.4 billion program of bike improvements over six years. Included in the projects is construction of the Pleasant Forest Trail from Pleasant Valley Road to Pleasant Forest Drive.

He said one of Pleasant Valley Road’s southbound lanes was recently converted into a buffered bike lane. And, he added, “Also planned is a median rescue-area for pedestrians crossing this heavily traveled road.”

At the park-and-ride on Stringfellow Road, said Lind, “There’s now a secure bike room to park your bike for $60/year. And we’re now starting to update our bike map. We’ll look at roads’ traffic volume, speed, width and percentage of trucks to give [people] a better idea of what it’s like to ride on them.”

Franklin Farm resident Jim Keating asked about trail maintenance, and Lind said the county Board of Supervisors appropriates $300,000 to $400,000 a year to maintain the county’s trails. “But there are hundreds and hundreds of miles of trails.” He then asked people to contact him (adam.lind@fairfaxcounty.gov) if they see problems with a trail, and his office will notify the county’s Department of Public Works or, in applicable cases, VDOT.

“FABB also advocated for grade-separating the bike crossings from the ramps on the I-66 widening project because they’re the most dangerous places for bicyclists,” added Stewart.

Fair Oaks resident Fionnuala Quinn lives on West Ox Road, on the north side of Route 50. But, she said, “There’s only a 4-foot-wide, biking-and-walking trail on one side of it — and that’s our only way to access Route 50. You have to cross two ramps to get to the Fairfax Towne Center, and there are dire safety issues there; we can’t see on the crossings.”

She asked if there’s funding to continue that trail or improve safety there for bicyclists. Lind said he didn’t think there was, and Mike Coyle with Sully Supervisor Kathy Smith’s office said he’d check for her.

“Sully is a newer part of the county, so many of the developers had to build sidewalks and trails as part of their projects,” said Lind. “But there are also many missing links where they don’t connect.”

A male resident also noted that King Charles Drive is about a 20-foot-steep incline, and Lind said it’ll be on the Sully cycle tour.

“It’s great that you’re telling our staff what the issues are,” Smith told the meeting attendees. “It’s important that we have different ways for people to get around. I’m prepared to fight for your issues, but you need to communicate with us.”

Agreeing, Lind said, “If you want bike lanes in your area, come out to these meetings. Often, we can get these done at no cost to the county when VDOT’s repaving roads.”

“Sully Park Drive [in Centreville] got bike lanes done this way, a few years ago,” said Coyle. “So it’s a great opportunity.”

“Far more men than women bike in Fairfax County, and it’s a reflection of the infrastructure conditions,” said Quinn. “And it’s an important issue because, as long as women aren’t biking, it’s a problem.”

Lind asked what roads people bike on in Centreville and Chantilly and was told Centreville and Lee roads, Conference Center Drive and Walney Road. Parnes, of Chantilly Highlands, said, “I just ride on the extreme right of a four-lane road because I’m more visible to traffic than when I’m on a sidewalk. And drivers can give me more right-of-way when they’re turning.”

Keating said he bikes from Franklin Farm to the Burke VRE station. Admittedly, he noted, “It’s been an adventure to find a good route. Around Monument Drive and Government Center Parkway, there are fairly wide roads with plenty of room for everybody.”

Another resident, Sara Dyer, said she bikes along Stringfellow. “The outside lanes are 14-feet wide now, so there’s more room on the road,” she explained.

Lind also asked if the meeting attendees prefer riding on paved roads or bike trails, and they were equally divided.

“Because we’re doing so much suburban driving, the right-on-red [lights] for drivers is an issue where people can get hit,” said Quinn. “The drivers don’t look for bicyclists and don’t realize the bicyclists have the right of way.”

However, related Parnes, “I’ve been in a car and was hit by a bicyclist on Poplar Tree Road, on the east side of the bridge over Route 28. She ran into my wife’s side door because she wasn’t looking at the stoplight. And I’m a bicyclist. So as much as bicyclists fear cars, we need to be aware of what we’re doing, too.”

Noting that she rides just for fun, Dyer said she stays on Stringfellow because “Everything else is a mess.”

Added Parnes: “The Franklin Farm Trail is less than 10 feet from the Fairfax County Parkway Trail — but there’s no connection between the two.” Lind replied that, “In the next funding go-round, we’ll be looking at opportunities to do some of these small connections.”

When the draft of the new bike map comes out, people may contact FABB at info@fabb-bikes.org and list where the missing trail connections are. They should contact VDOT to report pedestrian-signal and trail-maintenance issues. Stressing that FABB is nonprofit, Stewart invited anyone interested to “volunteer with us and donate to us.” For more information, go to www.fabb-bikes.org or contact Stewart at douglasbstewart@gmail.com.