Senators to Alexandria: Clean Up Your Act by 2020 or Lose State Funding
Votes

Senators to Alexandria: Clean Up Your Act by 2020 or Lose State Funding 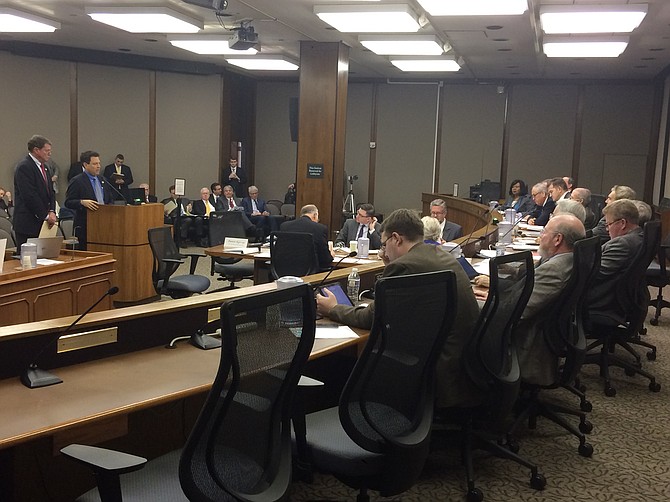 Members of the Virginia state Senate say they’re tired of hearing excuses about sewage from city officials in Alexandria, and they’re pushing ahead with a plan that one senator calls “the nuclear option.” This afternoon, the Senate Agriculture, Conservation and Natural Resources Committee approved a bill that sets a firm deadline for Alexandria to clean up its act — 2020. If city officials are unable to stop dumping more than 10 million gallons of raw sewage into the Potomac River every year, Alexandria would lose all state appropriations until the problem is fixed.

“I don’t want to hear any more excuses from Alexandria,” said state Sen. Scott Surovell (D-36). “The truth is that they’re more interested in building Metro stations and schools than they are solving this problem.”

At issue is an outdated series of underground pipes that mix raw sewage with stormwater runoff, a system known as a “combined sewer overflow.” As a result, almost any amount of rainfall sends raw, untreated human waste directly into the Potomac River at four different locations in Old Town know as “outfalls.” City officials have a long-term control plan to close three out out of the four outfalls. But they have not yet completed studies for figuring out what would be necessary to clean up the outfall at Oronoco Bay, which is responsible for about half of the sewage the system dumps into the Potomac River.

“The 2020 deadline, I’m going to be very frank with you, it’s an impossibility,” said Alexander Macaulay, a Richmond lobbyist repressing the city on this issue. “This is not realistic. There’s no way that we could build this facility in this timeframe.”

Senators were considering a number of different proposals on the issue, everything from putting together a study committee to setting a deadline of 2027. In the end, a majority of members on the committee decided to go with the most extreme version — setting deadline only three years away and putting all state funding at risk for failing to comply. Most of the senators on the committee, Democrats and Republicans, said setting a hard and fast deadline was they only way they felt they could get action.

“They didn’t just start dumping this today,” said state Sen. Richard Stuart (R-28). "They’ve been dumping this in for a long, long time, and they haven’t done anything about it, and we’ve got to have some mechanism to hold their feet to the fire.”

“I support this concept, and I support what Senator Stuart and Senator Surovell are doing,” said Petersen. “But if you read lines 20 through 24, it basically puts the governor in the position of withholding funding to a jurisdiction in the commonwealth. I’ve never seen that done before.”

Petersen also described the threat to take away state funding as "the nuclear option." The House of Delegates will be debating similar legislation later this month.