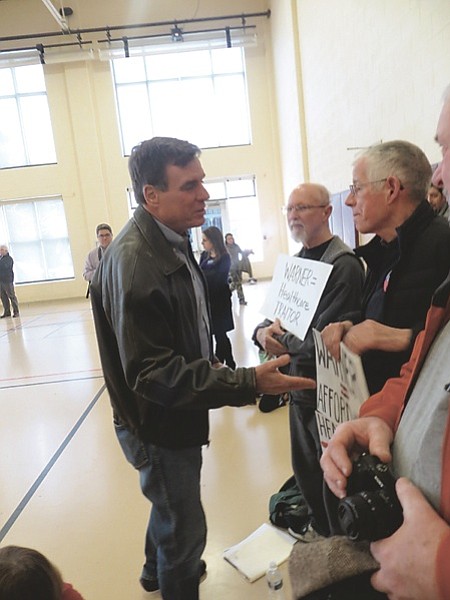 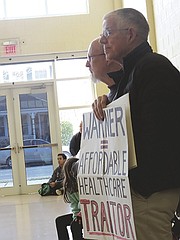 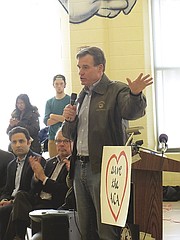 U.S. Sen. Mark Warner at a rally in support of the Affordable Care Act.

People at the rally made their opinions known. 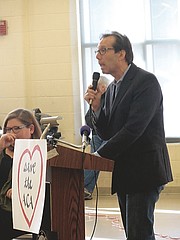 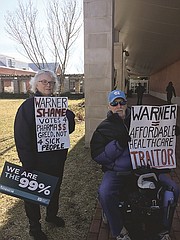 Since the passage of the Affordable Care Act in 2010, the number of uninsured Virginians has fallen by 31 percent. 327,000 Virginians have gained access to healthcare coverage they otherwise would not have had. As Republicans in Congress begin the process of repealing the Affordable Care Act (ACA), more than 100 citizens from throughout the region rallied on Jan. 15 at Alexandria’s Charles Houston Recreation Center in support of affordable healthcare.

“Two months ago, I was confused and stunned,” said Arlington County Board Chair Jay Fisette. “Now, I’m angrier than ever … I’m angry that the value of expanding access to healthcare is a debate.”

Like many in the audience, Del. Patrick Hope said his biggest concern was that the plan for what to replace the ACA with remains unknown.

“Everyone here knows someone benefiting from the ACA,” said Hope. “We need to take this fight [to them]. Pick up the phone. Call the Speaker of the House.”

Fisette and Hope were joined by U.S. Rep. Don Beyer, Del. Mark Levine, and other local Democrats. However, the planned show of unity was disrupted by U.S. Sen. Mark Warner’s vote on Jan. 11 against an amendment that would have allowed Americans to purchase cheaper drugs from Canada. Warner was one of 13 Democrats who opposed the amendment.

“Healthcare is unaffordable for most working people,” said Terry Sopher, who sat in his wheelchair outside the rally with a sign calling Warner a healthcare traitor. “For him and 12 other Democratic senators to vote against this amendment is shocking. If you’re for affordable healthcare, you should have supported this.”

Sopher and his wife Harriet travelled to the rally from Annandale. Terry Sopher said he had occupational toxic exposure that left him with long-term health problems.

“We had income and retirement funds, but it costs $25,000 a year to keep me alive, and we’re better off than most,” said Terry Sopher.

Inside the center, a dozen citizens scattered throughout the room held up similar signs, ranging from some asking why Warner opposed the amendment to others like Terry Sopher’s labelling Warner a traitor.

But Connolly’s call for unity was less than effective. As Warner got up to speak, someone in the crowd shouted “explain your no vote.”

“We need to negotiate on drug prices,” said Warner. “There will be a time to have a debate on that ... That’s the thing about Democrats, we can agree to disagree.”

Outside of the recreation center, Warner clarified what he meant by negotiate on drug prices.

“The way Canada is able to get drugs so cheaply is through government purchasing,” said Warner. “We don’t do that here. That would actually deal with the problem. We need to try for a permanent fix first, and if that doesn’t work we can look at other options.”

Warner also said the government needs to ensure a speedier path to drug approval for pharmaceutical companies. But for many citizens, health care costs are an immediate crisis.

Marsha Wallace is a senior citizen who says she lives on a fixed income with a preexisting condition. With the imminent repeal of the ACA, Marsha says she’s worried about a friend with a brain tumor whose insurance made it possible to be treated before the issue was critical. Wallace also said she was concerned if ACA was overturned the Republicans could target Medicare next.

David Kuebrich was one of the citizens holding a sign calling Warner a traitor. Kuebrich said he was disappointed more people weren’t here to hold Warner accountable for his vote. But for many in the audience, the politics of the ACA and the votes around it were less important than the fear for loved ones who could soon be without insurance.

Liz Salter has a medical conditions that affects her brain, kidney, and heart. There is no cure, but treatment costs $16,000 per visit, totalling $400,000 every year. Salter appealed to citizens, and politicians, to look beyond the politics of the ACA and try to help citizens facing serious illnesses.