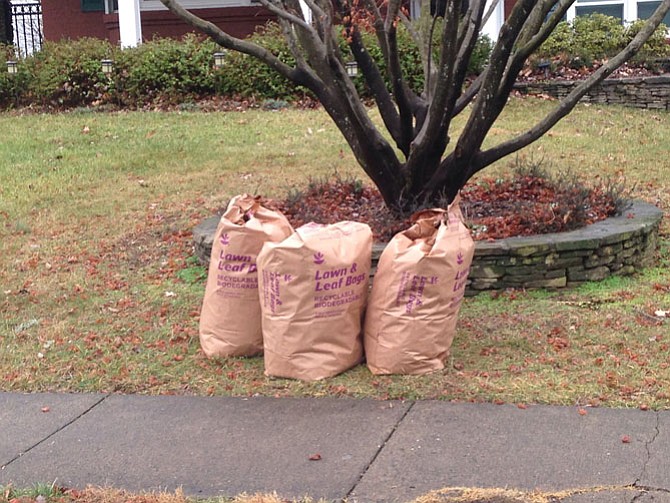 North Springfield resident Asher Grady has his leaf collecting down to a science. And with the mature trees around his quarter-acre lot, he needs to. Each fall, he said, he goes through between 60 and 80 bags of leaves, spending between eight and 12 hours to rake and bag them.

“I’ve developed a system,” Grady said, “I use large Rubbermaid trash cans with the bag inside so I can tip them over and rake in the leaves.”

When he’s done, Grady places the bags of leaves and any other yard waste on the street where a private waste removal company that services North Springfield snags them.

The use of plastic bags is being questioned, however, and earlier last fall, Fairfax County quietly announced in September 2016 that residents should switch to using paper bags for yard waste instead.

Grady first heard about the change on North Springfield’s Facebook page. “There was nothing leading up to it,” he said.

“It hasn’t been well-publicized,” said Ken Balbuena, president of the North Springfield Civic Association. “You expect something to be sent home from the county. Residents, they’re not happy.”

FOR AREAS declared a “Sanitary District,” Fairfax County provides a leaf and yard waste collection service that gets assessed on taxes as a fee. But county code still gives guidance on what type of bag may be used, regardless of who’s collecting waste from whom.

Christine McCoy of the Fairfax County Solid Waste Management Division Recycling Outreach and Education says on the county’s website that using plastic bags to collect yard waste is no longer a sustainable practice.

County and private haulers remove around 208,600 tons of organic yard waste, Fairfax County says. They claim an estimated 20 percent of that clings to the plastic bags and must be trashed rather than recycled and composted.

“In fact, it’s something we can no longer afford to do if we want to make a real impact on protecting our planet,” she says in a recorded statement.

According to county website, use of plastic yard waste bags is to be discontinued throughout Fairfax County effective July 1, 2017.

Supervisor Pat Herrity (R-Springfield) said county staff has presented on making the switch from paper to plastic before, but the Board of Supervisors never voted on the matter.

The issue is actually scheduled to come up at a public hearing on Jan. 24.

Herrity alleges staff said the facilities that accept yard waste from Fairfax County are now banning plastic bags, leaving the county no choice but to comply.

Herrity said he and his staff have been in touch with the two major facilities, “who said they have no intention to ban plastic bags.”

“Flat out inaccuracies were reported to the board,” Herrity said. “A decision was made before getting input from citizens, before the board voted on it. And the board authorized a public hearing under false pretenses.”

Making such a change requires a county code change, Herrity said, which needs a vote by the supervisors.

Grady said he’s tried using paper bags before: “It was a disaster.”

Due to their smaller capacity, Grady needed to purchase many more bags than he normally uses. “And there’s really no way to close them, so when it was windy, they’d blow over on the street. When it rained, they fell apart.”

Grady’s experiences aren’t unique and are why many North Springfield residents are upset about the potential change. Herrity said he’s heard from many constituents on the topic as well.

THE BAG ISSUE is on the agenda for North Springfield Civic Association’s next board meeting, the night before the hearing is scheduled. Balbuena said he may speak at the hearing if prompted by the community.

“Obviously this way is a more democratic approach,” Grady said, “I support that.”

Herrity expects the proposal to be deferred following the public hearing.

“I’m not happy it was considered a done deal,” he said.