Part I: A three-part series focusing on prisoner reentry in Northern Virginia.
Votes

Part I: A three-part series focusing on prisoner reentry in Northern Virginia.

Employment and housing prove to be major hurdles. 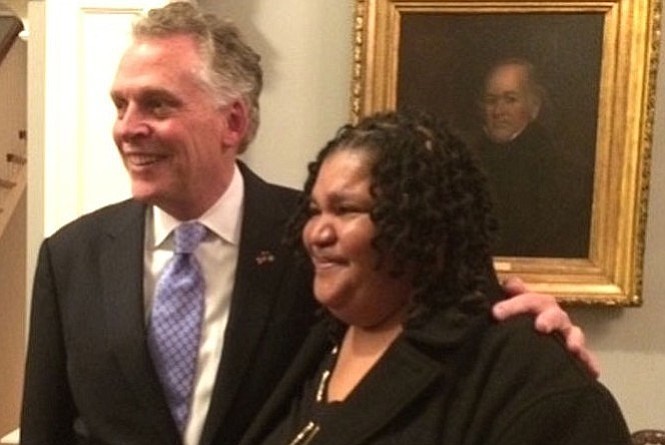 Terry Garrett with Gov. Terry McAuliffe: “I walk by my former drug dealers all the time in Alexandria.” 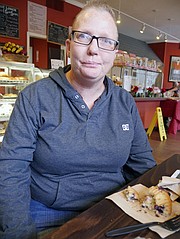 Mary Ulrich, ex-offender: “I looked forward to the day for eight and a half years and when the time came to get out, I was scared. You can’t make any decisions in prison.”

For comparison 112-176 per 10,000 in top group includes Bristol, Martinsville and Danville

*grouped with other similar counties

In Virginia, 38,000 citizens were incarcerated in 2016. Almost 90 percent of those released return home.

What happens next? As one former prisoner put it, they give you a $25 check and take you to a Metro stop and remind you to see your parole officer in the next 24 hours. What do you do next? Where do you go? The barriers toward survival "on the outside” include difficulty finding employment due to reluctance of employers to hire an ex-offender, complex family relationships, cultural shock as they reenter the community and difficulty finding housing.

Harold Clarke, director of Corrections in the Commonwealth of Virginia, says the major obstacle right now is employment, “A number of employers are reluctant to provide employment because they are concerned about the criminal history.” He says that the “ban the box movement” instituted by the governor is a step in the right direction since a former prisoner is not disqualified immediately. “But,” Clarke said,” the criminal history will come up later in the job application process.” Clarke adds that national research shows that people with a criminal history have a 40 percent less chance of securing employment.

Elizabeth Jones Valderrama, executive director of Offender Aid and Restoration (OAR), an organization working with formerly incarcerated prisoners in Arlington, Alexandria and Falls Church, says she thinks the major problem is job retention. “We can usually find them a job, although it may not be at a livable wage. But the formerly incarcerated person isn’t used to waking up on their own, deciding what to have for lunch, keeping a schedule. Everything in prison is decided for you.”

Mary Ulrich, in Virginia state prisons for 8.5 years, had been trained in horticulture in prison, earning a technical certification in seven areas. When she got out of prison she went to every gardening place in Northern Virginia and was rejected when they found out where she had received her training. After a suggestion from a staff person at OAR she decided to start her own business. "It had been in the back of my mind," she said.

So she bought a scooter and with a saddlebag full of gardening tools and plants juggled between her knees, she found a client. Now she owns a Chevy Tahoe which she says will be paid off next month. While she is still struggling, she is making a business designing and landscaping yards and businesses.

Terry Garrett, a former prisoner who was released in March 6, 2006 said, "It is discouraging sometimes. You know the rejection is coming. You have to find that one person who will give you a chance." In her case, it was the Salvation Army, but it triggered her asthma and she ended up in the hospital, "so I had to quit. I applied for disability and worked at Cosi's on King Street until my disability came through.” Now she is a public speaker for Guest House and a part-time monitor there. Guest House is a community-based program located in Del Ray for recently incarcerated women. She says next week she has been invited by Gov. Terry McAuliffe to a ceremony celebrating voting rights for former prisoners.

Jennifer Male, parole and probation officer in Alexandria, says the major issue she sees in her caseload is not employment but is lack of housing. “In Alexandria you can have a good job, but if you are a felon, you can’t live here. In Alexandria 99 percent of the time you won’t get accepted.”

Another challenge facing returning prisoners is family relationships which are often complicated and difficult. The prisoner may want to reconcile, but often the family is disillusioned and reluctant or they don’t know how to begin the process after years of estrangement. It is difficult for a prisoner to maintain a relationship with family since most of the prisons are south of Richmond and travel distances can be long and trips to visit are expensive. Phone calls are difficult to make from prison and one call can cost $6-10. By the time a prisoner is released families have given up.

Jones Valderrama recalls one of the families of a prisoner who couldn’t get there for a visit. But OAR has a van and can sometimes drive a family member over to see the prisoner. “It is powerful to see the reunion,” she said.

Garrett said that she had to wait two days before she could get into Guest House so she stayed with her daughter. "It was hard and emotional. They were bitter. My daughter said if you use again, I'll never speak to you again. I was broken. I didn't think they would ever come around."

Ulrich added, "I see post traumatic stress in my children. I found out later they were scared I would show up at their door and they would have to take care of me."

Kari Galloway, director of Guest House, said, "Children are what keep a lot of these women going. The women don't want to disappoint them. But when the clients first come here, some of them see children they haven't seen for a long time. It is very emotional. They want to be a mom but they don't know how. They have the feeling but not the relationship.”

Jones Valderrama, said, “We often say everyone in the family goes away and the silent sufferers are the kids of the prisoners.” Jones Valderrama recalls that she first thought about this when she was assistant to the principal at Patrick Henry Elementary and parents would let the school know that their child had a parent who was incarcerated. “The number started to grow.”

Another issue is cultural shock when the ex-offender is suddenly out in the community. What it takes to stay alive in prison is almost opposite of what it takes to to survive outside. Ulrich said, “When I was leaving and they were packing me out, I couldn't sleep the night before. This was the day I'd been anticipating for 8.5 years and it was nerve wracking." She said, “I’d gotten close to people, like my greenhouse instructor and it was bittersweet to leave. It was scary."

Ulrich said she was released on Jan. 7, 2013. For the first time she wasn't handcuffed. "They give you a check for the wages you have earned if you had a one of the scarce jobs in prison. They took me to a bank and told me to go on in. I didn't know what to do. It was the first freedom I'd experienced." She continued, "You can't make any decisions in prison." She remembers going in to a 7-11 to get a coffee. "I just stared at the 12 different cream choices. In prison you had the blue packet or the yellow packet."

Ulrich had to make a choice what to do next and decided to apply for Guest House. Galloway said, "It's all about second chances or third or 12th but it is not one size fits all." She said the women who come there have had a lot of trauma from abuse or violence and face so many barriers. "One woman came and during the first required three-day black-out period where they can't go anywhere, she was totally overwhelmed. She sat on the couch and cried for a solid three days."

Clarke says a lot of things can make a difference in the culture of the community. If the former prisoner goes to a conservative community, it may be hard to integrate. And if they return to where they came from, sometimes the conditions are still alive and well in the community that got them in prison in the first place. It is difficult. Galloway added, “They have to practice, not falling back, avoiding the old triggers." Garrett adds "I pass my old drug dealers all the time when I walk around Alexandria. But I told them I had stopped using and they respect that and don’t bother me. At first it was hard but I acknowledge them and keep going.”

Elizabeth Bowers, a resident of Guest House since November 2016, says she experienced shock from nine months in jail coming to a city like Alexandria. "I'm from Briery Branch in Pennsylvania that no one has ever heard of and I've never seen this many houses.” It took two weeks to figure out the right buses to get to her appointments. When she tried to take the Metro to a job interview at Tysons Corner, “I got on the wrong Metro and I was supposed to transfer from the blue line to the yellow line and I couldn't even get to my interview.” She says even on bad days she doesn’t want to give up: “I want to deal with it.”

Galloway said, "We have to build trust. In prison everybody wants something and no one trusts anyone else. We have to get down in the dirt with them. It took a long time with Terry — she really gave me a hard time."

Bowers said, “After coming to Guest House now I open up more about my issues. I didn't think anyone cared." Garrett says the women are like a bouquet of closed rose buds. “But every time I come back I see a rose opening up. Elizabeth has a made a lot of progress since she came here. Every few days when I come I see a difference.”

Galloway said, "We have an incredibly robust volunteer program. People care about the women here who don't even know them and it is amazing to the clients. But they think, why do you want to help me; what do you want from me. This program is three months residential within a group home environment filled with structured services and support. The aftercare can last 6-9 months and is considered mandatory to successfully complete the program. Galloway says, what these women do is hard work: "I greatly admire they have made it this far.“

The next part of the series will focus on solutions.