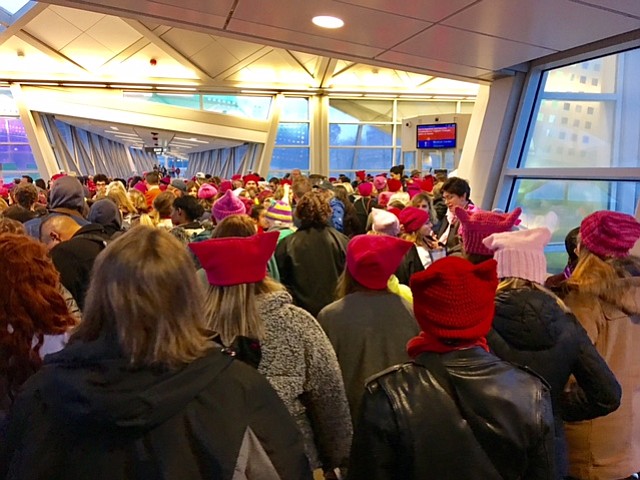 Crowd filling metro train at 7:35 a.m. at Wiehle Station in Reston. Not an exaggeration to say thousands came from Reston alone. Heavy volume 6AM to almost 12 noon. Photo courtesy of John Lovaas

A view west down Independence Avenue from sixth street. Independence was literally packed with marchers from about third to ninth street up Independence with thousands more spilling over a block north and south of Independence.

A view from steps of Air & Space Museum looking toward Department of Education, an institution in the crosshairs of the fire from the new administration. Note the thousands of pink hats, most knitted for use in this very March. 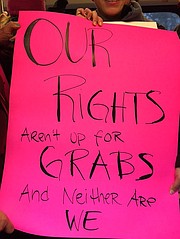 One of the thousands of signs displayed at the Saturday’s March on Washington, D.C. The Women’s March on Washington turned out to be one of the largest demonstrations in the city’s history, according to city officials, drawing more than 500,000 participants. The march was scheduled to follow on the heels of Friday’s Inauguration of the 45th president, Donald Trump.

The mood was one of joyful camaraderie along with determination to stand up to what marchers saw as a terrible threat to their values and their country.

My 16-year-old grandson was attending his first march and first protest. Initially concerned about being a lonely male in a Women's March, he was soon infused with the spirit and felt as one with the lively, fiercely determined throng. He was soon not only singing along, but creating and leading his own protest chants--e.g., "hey, hey, ho, ho, Donald Trump has got to go!" And hundreds nearby were joining in as the new wisdom spread more broadly through the crowd!

It was an amazingly diverse crowd, maybe one in ten being male, from the very young to the very old. While majority white, there was strong ethnic variety making up at least a third it seemed to me.

On two occasions we saw paramedics come to take stricken seniors to an ambulance. The crowd parted like the biblical sea to make way for the stricken and the responders. Similarly, people packed shoulder to shoulder somehow made way for baby strollers and wheelchairs miraculously sharing in this all-hands-on-deck event.