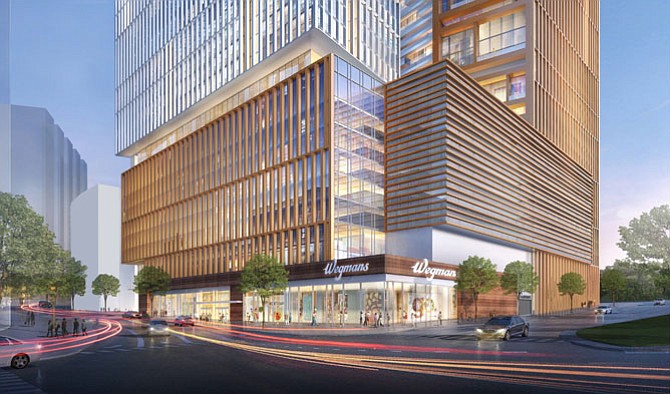 A Capital One Center and a large format retail space for a Wegmans Food Market were introduced as part of an amendment to the development’s originally-approved plans. Photo courtesy of the Fairfax County Department of Planning and Zoning

The more than 5.2 million-square-foot triangular site is bordered to the north by the Capital Beltway (Interstate Highway 495), Dolley Madison Boulevard (Virginia Route 123) to the south and Scotts Crossing Road to the east, and is immediately north to the McLean Metrorail station on the Silver Line.

The changes decreased the area for publicly-accessible parks and open space from 4.47 acres to 4.27 acres, shown in green.

A portion, 1.8 acres, of the 4.27 acres of publicly-accessible parks and open space will now be located on top of structures, shown in maroon.

The Fairfax County Board of Supervisors unanimously approved new plans for Capital One Bank’s redevelopment of its corporate headquarters in the Tysons area of McLean on Tuesday, July 11.

The bank amended its conceptual development plan for the site, which the board previously approved as a mixed-use development in 2014, to make room for a new 125,000-square-foot Capital One Center and a large format retail space for a Wegmans Food Market.

This resulted in several other changes to trickle throughout the development.

Modifications included changes to the development’s site layout, density, use and building heights. The project’s proffers, which are written conditions that are offered voluntarily by a property owner and accepted by the board in a rezoning application, were also changed.

The proffers, which were originally approved by the board in 2014 were legally binding conditions for the redevelopment of the property and could only have been amended by permission from the board.

“This is something new that we are doing,” Supervisor Linda Smyth, who represents the Providence District where the development is located, said during the hearing. “This is a new sort of public-private partnership with public facility use, but within a performing arts venue. So, this is an experiment — let’s be frank about it — but it’s something that we put a great deal of time, thought and effort into it … this has been a real discussion about how do we work this together and come up with something that will truly be an asset to the community.”

She also said that her constituents at the Gates of McLean told her that they were excited for the new dog park that was included in the new plans.

THE CHANGES will add an additional 243,199 square feet to the site, going from a previously-approved 4.9 million square feet to approximately 5.2 million square feet. The floor area ratio (FAR), the ratio of the total floor area of the project’s buildings to the size of the parcel of land that they are built on, would also increase from 3.9 to 4.1, according to Stephen Gardner, a staff coordinator with the Fairfax County Department of Planning and Zoning.

Some community members were not satisfied with the additional density and decrease in open space.

The changes will decrease the area for publicly-accessible parks and open space from 4.47 acres to 4.27 acres, according to Gardner. These public spaces were originally planned to be at the same level, but are now both at ground level or atop structures.

“As proposed, the application includes a total of 4.27 acres of publicly-accessible parks and open space, 1.8 acres of which is now proposed to be located on top of parking garages,” Gardner said during the board’s public hearing.

The largest of the open spaces is a 1.59-acre Metro Park, which will be located in Block D of the site.

“Based on the square footage proposed, this application will generate the need for 0.91 athletic fields,” Gardner said during the hearing.

An agreement between Capital One and The Commons, a development located at the south side of Chain Bridge Road and both sides of Anderson Road, would help the bank meet its public proffer requirements by locating one athletic field at The Commons and other public facilities at the bank’s corporate campus.

The one offsite field is not enough to meet the requirements of the proffer, according to Gardner. To meet the residual balance, the originally-approved plan included a 100-foot-by-100-foot synthetic, turf athletic field to be located at grade within the interior of Block C.

However, the addition of the event center and food market left no room for the athletic field on the site. Instead, the new plan will build two small athletic fields for play by children under 7 years old (U7 fields) in Block E of the site. The bank will also include a temporary 120-foot-by-180-foot natural grass field in Block D of the site.

“This field will be provided until such time as Block D develops or a permanent field is provided in Block E,” Gardner said during the hearing. “The permanent field … includes two synthetic turf U7 recreation fields or one U9 field for a combined playing area of 90-feet-by-120-feet.”

The originally-approved plan also required the bank to provide a community recreation facility, according to Gardner.

“Although the location of the facility has shifted through subsequent modifications, it is now proposed to be located within Block E as either a standalone or an integrated facility,” Gardner said. “The proffer specified the area of the facility be 30,000-square-feet and amenities to include a gymnasium, exercise rooms, among others.”

But the addition of the Capital One Center will satisfy the bank’s public facility commitments, according to Gardner.

The events center will include a 1,500-seat auditorium, 225-seat black box theater and two classrooms, which will be equipped with a main hall, orchestra pit, a fly system, dressing rooms and lighting, sound and rigging systems.

“The Capital One Center is intended first as a training and conference center and second as an arts and cultural center to be made available to community groups,” Gardner said.

During the hearing, Braddock District Supervisor John Cook asked for clarification on the bank’s commitments on athletic fields.

According to the county’s field allocation policies, leagues and sports groups can sign up to use the permanent U7 fields on the site from anywhere in the county, not just the Tysons community, according to Andrea Dorlester, manager of park planning at the Fairfax County Park Authority, who was present at the hearing.

“So, open to the public, not just the community there,” she said.

Cook pushed back saying he thought the idea was to provide recreation for nearby community members.

“The idea is that the new fields in Tysons are meant first and foremost to serve new residents within Tysons, but the way the county field allocation policy works, you have to organize into teams and leagues,” Dorlester said.

Since the permanent fields are only meant for children under 7 years old, Cook asked where the nearest field was located so older children living in Tysons could play.

“We do have a number of other proffer commitments from several other applications in Tysons and we already have two athletic fields constructed and open to the public in Tysons and several more coming online,” Dorlester said.

Smyth chimed in to remind Cook that The Commons would have a “full-size, tournament-size athletic field” across Virginia Route 123 will be built.

Still, the McLean Citizens Association has been tracking the development and have voiced their concern for lack of playing fields for the planned uptick the Tysons area will experience as development continues in the area.

The MCA’s contention is coming from the corporation bulking on promises it previously made to the community.

The MCA’s Board of Directors approved resolutions on June 12 and July 5, stating the association’s support of the development was contingent upon the bank providing more public park land and one permanent field on site that is appropriate for adult use.

THE MCA RESOLUTIONS also expressed concern about the public ease of access to elevated park areas and stated the bank should invest in wayfinding by providing signage to direct the public to the amenities.

“We do have several concerns about certain aspects of Capital One’s proposal,” Rob Jackson, co-chair of the McLean Citizens Association Planning and Zoning Committee, said during public testimony at the hearing.

“If these increases are not implemented, adjust downward the public facility credit and percentage exception from the monetary contributions to Tysons’ road funds, also as outlined in our previous resolution of June 12.”

The original proffer for the facility required the space to be dedicated for public use for 50 years with the option for two 15-year renewals, according to Gardner.

However, the amended duration of the agreement between the bank and the county for usage times and operational considerations was reduced to 30 years and one five-year extension, according to Gardner.

Jackson also voiced the MCA’s concern that the two permanent U7 athletic fields are too small and urged that the space be used for one U9 field.

“I mean, mainly adults are going to be on this field and I think you can get some five-on-five on a U9 field,” he said.

He also relayed a broader concern that the MCA has for Tysons as it continues to develop and grow.

“Because of the important role that a community center plays in building a sense of community and enhancing livability within Tysons, we strongly urge the Board of Supervisors as a matter of high priority to bring the Tysons land owners together to work to provide the land and to construct a Tysons community center at an alternate location while land may be available within Tysons for this purpose, Jackson said.

Foust acknowledged the MCA’s concern of finding a space for a community center in Tysons prior to the vote.

Linda Sullivan, president and CEO of the Arts Council of Fairfax County, was the only other member of the public to testify at the hearing and her comments were supportive of the bank’s proposal, based on the addition of the Capital One Center.