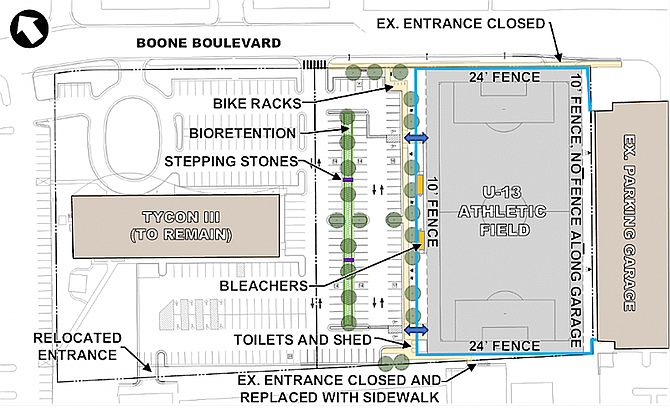 The new synthetic turf field will be on Boone Boulevard between Howard Avenue and Gallows Road.

At its Sept. 24 meeting, the Board of Supervisors approved a plan by PS Business Parks to build a youth athletic field instead of a previously approved hotel on a parking lot in Tysons. The new synthetic turf field will be on Boone Boulevard between Howard Avenue and Gallows Road near an office building and retail space. The 180-foot by 330-foot field will include lighting, bleachers, bicycle racks, benches, fencing, an equipment storage facility and at least 25 parking spaces.

The existing on-site surface parking lot will be modified to serve existing and future visitors to the office buildings and athletic field. PS Business Parks will maintain ownership of the athletic field; however, a public access easement will be granted to the Fairfax County Park Authority.