Two state senators and a delegate hope to snag bid to preside over Senate sessions. 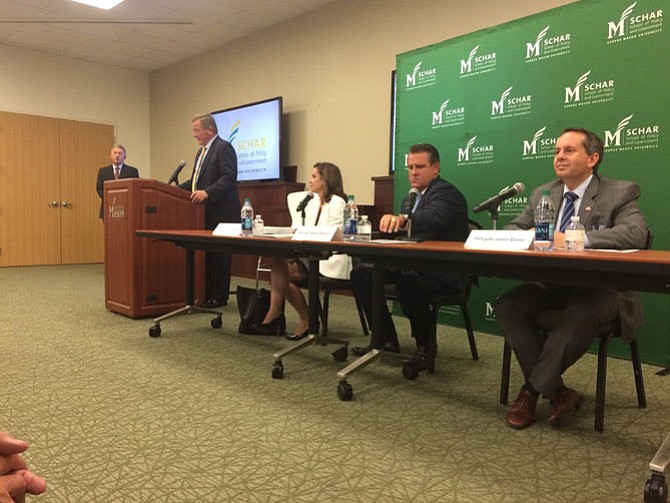 • $95,711 from Jill Vogel for Senate, the candidate's Warrenton-based campaign committee for her Senate seat

• $28,500 from Michael Smith of Middleburg with the food distributor Valley Proteins

• $3,500 from Bruce Thompson of Virginia Beach with the real-estate developer Gold Key/Professional Hospitality

• $230,000 from Bryce Reeves for Senate, the candidate’s Fredericksburg-based campaign committee for his Senate seat

• $25,000 from John Nau of Houston with the alcohol distributor Silver Eagle Distributors

In a crowded room at George Mason University a few days ago, Republicans from across Northern Virginia who gathered to hear the three Republicans running for lieutenant governor heard something a little different — a Republican candidate who is campaigning on her ability to break with the GOP and vote with Democrats.

“In the time that I’ve been in the legislature, since the first year that I was elected I put principle over party,” said state Sen. Jill Vogel (R-27). “And I was willing to break with my caucus on issues that really mattered to me and mattered to my constituents.”

Vogel is pitching herself as a candidate for lieutenant governor who would be able to work with Democrats in the legislature and even — possibly — a Democrat in the Executive Mansion. During the George Mason debate, she made that case directly to voters, saying that bringing jobs to Virginia should not be partisan issue.

“It’s misplaced to always talk about these things in a partisan way because they are not partisan issues,” she said. "They’re management issues. How would you manage your business to make it more competitive?”

“See I view politics like mold,” he told the audience at George Mason. "Everybody think in your shower, you see mold growing in the grout, right? What happens if you don’t kill the mold with bleach? It grows. That’s politics. And you put that on good policies, and if you don’t kill that mold right away, it will kill good policy.”

Reeves says he’s willing to work with Democrats on issues where they can agree. After the debate, he said said he wanted to accomplish tangible goals if elected.

“If you’re looking for someone who is just sitting around to be the next governor, that’s not me. I would be a working lieutenant governor. That’s why I went for the job, and I want to get some things done and some heavy lifting done. That’s why I’m running for the office.”

When asked if that meant he would not run for governor in four years, the senator declined to make a commitment.

“I’m not saying I wouldn’t,” he said. "I’m just saying most people run for lieutenant governor job and they sit on their laurels, and I don’t want to do that.”

Perhaps the most well-traveled candidate in the race is Del. Glenn Davis (R-84). For the last year, he’s been crisscrossing the state in a motor coach known affectionately as Mellow Yellow. He says all those miles have given him a broader understanding of the state and what he says should be the singular focus of the next lieutenant governor — jobs.

“As far as policies that set us apart,” he said, "I’ve actually got tax reform policies that I’ve passed and also some that I’ve already put together on my website that get rid of double taxation policies on Virginia businesses that are driving jobs and businesses away from Virginia to North Carolina, D.C. and then Maryland.”

On the campaign trail, Davis also talks about his experience in the General Assembly, especially his time on the a cybersecurity subcommittee.

“If I heard one more time that Maryland was the place to be for cybersecurity I was going to jump out a window,” he said at one campaign stop. "They don’t have the silver bullet. They’re just really good at talking about themselves. And unfortunately in Virginia we don’t tend to market ourselves and handle that PR very well.”