Racism — subtle and not — in Alexandria. 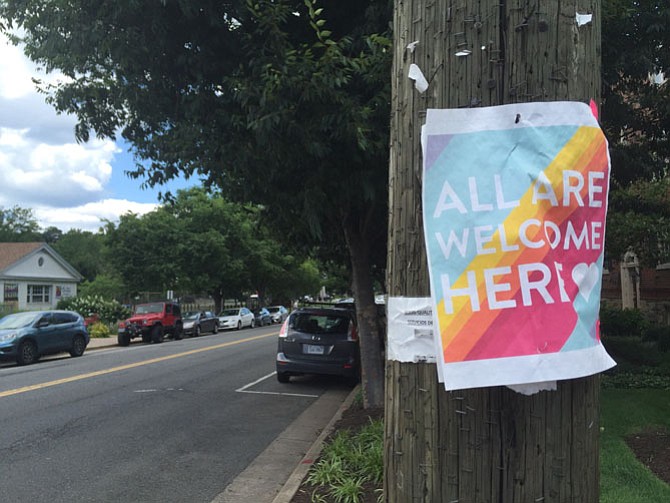 Alexandria — On May 27, residents of the Del Ray neighborhood awoke to find their

James Henson, local historian and one of the authors of “African Americans of Alexandria Virginia: Beacons of Light in the Twentieth Century.”

neighborhood plastered with posters bearing racist messages of hate against black Americans and against Islam. Like many Alexandrians, Lillian Patterson was shocked when she she heard about the racist posters put up in Del Ray.

“It really surprises me,” said Patterson. “I thought Alexandria was more subtle than that.”

The local residents quickly tore down the signs and replaced them with messages of love and support that a week later still remain on many telephone poles along Mount Vernon Avenue. But while Alexandrians, from neighbors to Mayor Allison Silberberg, have said the actions do not characterize this historic port city, Alexandria has a long history with racism. It is a history that was covered up and sometimes literally buried, but one that has never gone away.

Alexandria was a city built on the backs of slave labor. It was black slaves who were injured or killed in leveling the coastal cliff that give Old Town it’s current shape. In the early 1800s, Alexandria was one of the largest slave ports in the country. The Franklin & Armfield Slave Office & Pen, today the Freedom House Museum and home to the Northern Virginia Urban League, exported thousands of slaves across the American South.

Patterson is a fourth generation Alexandrian. Her family on her mother’s side has been in the city at least since the Civil War.

“For my grandmother, and for my mother, growing up in Alexandria was very much what it was like when I was coming along,” said Patterson. “It was a very segregated town. Everybody went their own ways. I didn’t know white people and they didn’t know me. When you live in divided communities you don’t even think about it, that’s just how it was.”

Andy Evans, a local community activist, said the racism in Alexandria was different than in other places in the south. The racism rooted deeply into the city was always something that simmered under the surface and only occasionally boiled over.

“The kind of racism that people talk about in the south is a little bit different from what you talk about in Alexandria,” said Evans. “There were places in south where if people would just walk in that neighborhood at night, you were in trouble. This was a town where nobody wanted to talk about it.”

While Alexandria is a southern city, James Henson, a local historian and one of the authors of “African Americans of Alexandria Virginia: Beacons of Light in the Twentieth Century,” said several factors have helped the city avoid more of the outright racial violence of other cities. Henson notes that the city’s proximity to Washington D.C. offered the city’s black citizens a degree of legislative protection in the 1800s. There were also education opportunities available in Washington D.C. that were inaccessible to black residents of other cities in Virginia.

But mainly, Henson said it was because the black community of Alexandria was very tight knit and had strong leadership. Until the mid-1900s, the black community in Alexandria had been clustered into several neighborhoods throughout the city. These were neighborhoods like The Burg, so-named from black residents moving into the city in the mid-1800s from Petersburg, or The Bottom just south of Alfred Street Baptist Church.

“Whatever happened in the street got home before you did,” said Patterson. “Alexandria was a small town for us. You knew most families. Not everybody in them, but you knew somebody.”

“These pockets helped protect the black communities from whites coming in,” said Henson. “No sane white person would go through The Bottom trying to intimidate black people. Alexandria was very different from other cities because the black community here had a unified strength.”

Throughout the mid-19th century, black leadership in Alexandria was at the forefront of the civil rights movement. A sit-in arranged at the Queen Street library by local lawyer Samuel Tucker was one of the the first of its kind to challenge the discriminatory laws. Evans, whose uncle was one of those arrested in the sit-in, came home from the Vietnam war and started to get involved with the local civil rights movement. In 1970, Evans worked on the campaign for Ira L. Robinson, the first black Alexandrian elected to the City Council since the end of reconstruction.

“Alexandria is a success story about changing the city,” said Evans. The city hired its first black police officer, Albert Beverly, in 1965. “Now, nobody thinks twice about black police officer. Back when Melvin Miller ran for City Council, there was a firestorm. People were saying ‘don’t let two blacks run for City Council.’ Now we have two [on the council] and nobody thinks twice about it. Once generations mix and have diversity, it’s harder to pass on that racism. We’re in a transitional phase now.”

But black leaders in Alexandria say they have seen that tone shift in the last few years.

“It leaves me concerned, as it should leave all of us, about the future direction of our country with regards to race, ethnicity, and diversity,” said William Euille, who in 2003 became the first black mayor of Alexandria. “I think it’s unfortunately a sign of our times, but that doesn’t mean we have to tolerate or accept it.”

“I feel that the new administration has emboldened people, where people would normally hold back out of civility, or out of respect,” said Lavern Chatman, born and raised in Alexandria. “There’s a segment that feels emboldened. The whole ‘Make America Great Again’ sometimes means striking out against certain communities. Hadn’t seen it that blatantly in this community before.”

In 1970, Evans remembered when the American Nazi party came to Alexandria and tried to create a stir. Evans said the Nazis were trying to get a rise out of the local black population to incite violence, but just found themselves laughed at. Evans said it’s no different with the racist posters in Del Ray.

“People behind things like the poster are trying to create a stir,” said Evans. “The problem they have, a lot of the original blacks who grew up here just look at it as a bunch of knuckleheads. These people don’t know this city well enough.”

But in 2017, Alexandria’s black community is still very much under siege. Black leaders in Alexandria say the biggest threat to the community today is not from racist flyers or alt-right lobbyists, but the long, slow death of affordable housing in Alexandria. The neighborhoods that first gave the black community in Alexandria a unified voice and strength are being pushed out to make way for new development.

“I don’t even have to think about it: the biggest issue [facing the black community in Alexandria] is affordable housing,” said Euille. “That’s number one.”

“There were a lot of African American communities in Alexandria,” said Patterson. “All of them have been gentrified or destroyed.”

The historically black neighborhoods in Alexandria were home to much of the city’s market-rate affordable housing. These were places that were not set aside by the government as affordable and weren’t public housing, but were considered affordable to local residents at lower incomes. Sometimes rising property values and taxes forced the rents to continue to rise until the residents were forced to disperse. Patterson said many residents of the south side of the city moved into Del Ray. Along with Queen Street, Mount Vernon Avenue became one of the spots in the city with a large share of black businesses.

“Then, somewhere along the line something began to change,” said Patterson. “Folks move in and yuppied up the housing. It became more expensive.”

In other cases, the places that were once black communities were physically destroyed by the city. Many of the sections of what was once market-rate affordable housing units have been replaced with public housing projects. The neighborhood that was The Burg still exists in a few blocks of the city, but only as public housing. Parts were demolished to make way for Chatham Square, a mixed-income residential development. Further west, the black community that was built around Fort Ward after the Civil War was pushed out to make the space available for historic preservation. The community moved east into a part of the city derogatorily called “Mudtown.” Patterson recalled that the area was covered in mud and much of the streets were unpaved, but the black community worked for years to completely transform the area, only to be forced out again in 1971 to make way for a new integrated high school.

“[The city] took the area between the white neighborhoods, where the black community was,” said Patterson. “They destroyed it to build the new high school. The biggest insult was naming the school after T.C. Williams, who was the biggest racist in town.”

Patterson said this phenomena is something she’s seen her whole life in the city.

“It’s a nice-nasty town,” said Patterson. “They will do something that looks nice on the surface, but is nasty when it goes deeper.”

Chatman said the lack of affordable housing is one piece of the larger income inequality crisis that haunts Alexandria, as it does cities throughout the country.

“Income inequality is an issue in this city,” said Chatman. “We’re still giving scholarships to young people who are the first in their families going to college. These are still the kind of issues that are affecting these communities.”