‘Success Is Attainable for Everyone’
Votes

‘Success Is Attainable for Everyone’ 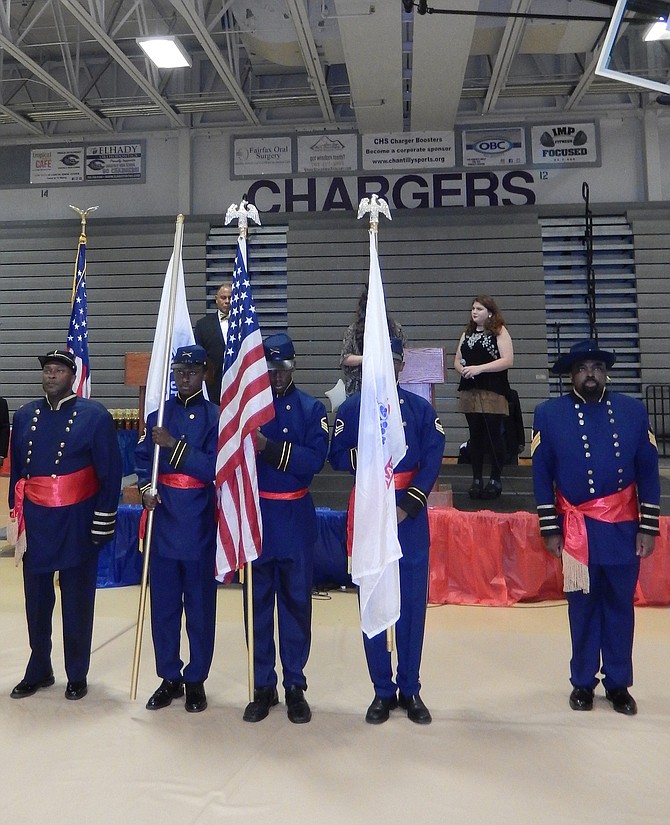 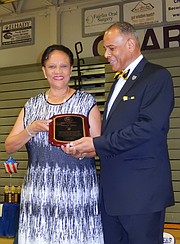 Pat Williams receives a plaque from CPMSAC’s Chuck Coffin. Williams retired in December after 31 years with FCPS and 13 years as an administrator at Westfield High. 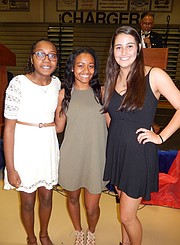 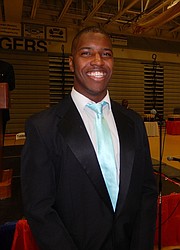 The students being honored walked in, as is tradition, to the song, “Celebration.” Noting the organization’s motto, “Only excellence is good enough,” CPMSAC’s Chuck Coffin told them, “We encourage you to continue to work hard because the best is yet to come.”

Dignitaries attending included various FCPS representatives, school administrators and counselors, plus School Board member Ilryong Moon. “The late Shirley Nelson was the founder of and visionary for this organization,” said Coffin. “And I can only imagine that, as she’s looking down from heaven today, she’s smiling, because this program brought joy to her heart.”

Chantilly High Assistant Principal Karla Hogan told the students, “Today we celebrate the hard work you’ve done and the good choices you’ve made. But remember, today’s just the beginning of an educational journey that’ll take you wherever you want to go.”

Douglas Tyson, assistant superintendent for Region 1, conveyed greetings from various school system administrators and told the students it was an “honor and a privilege” to recognize their accomplishments. “We’re proud of the dedication you’ve shown and the success you’ve achieved thus far in your academic career,” he said. “This is an example of what happens when students dedicate themselves to academic, personal and social excellence.”

“We encourage parents to work with the schools so students can get the best education possible,” added Coffin. “Parents should be involved and advocate for their children, and they should also create a learning environment at home where students can do their work.” He further noted that CPMSAC partners with the schools in offering its free tutorial program, Saturdays toward Excellence.

During the event, both Coffin and CPMSAC co-founder Johnny Nelson honored former Westfield High administrator, Pat Williams, a longtime CPMSAC supporter. They presented her with a plaque in recognition of her 31 years with FCPS.

She also joined the university’s Pre-Law Association, the Association for Women in STEM and several academic honor societies. And since she had 36 credits toward her college degree when she graduated from Westfield, she’ll be a junior next year, instead of a sophomore. She wants to someday become an environmental lawyer.

“I’m living proof of what happens when you don’t give up on people,” said Clay. As a child, she had delayed speech and hearing and was also diagnosed with ADHD. Her parents found the right doctors to help her but, after 10 years of speech and language therapy, she still struggled with academics.

Her parents helped her understand her schoolwork, and then her family moved to Northern Virginia. Clay enrolled at Westfield and was impressed with how rigorous schools here are. “I took public speaking as a freshman and it changed my life,” she said. “It made me more extroverted and comfortable speaking in front of others.”

The point of education, said Clay, is to “Do the best you can academically so you’ll have options in the future. And if you continue to do your absolute best, you’ll look back and have no regrets.” She also said reading improved her speech and communication skills, and she learned the importance of “keeping things in perspective when considering my future.”

But most of all, she told the students, “We have to really think about what makes us happy and if the work we do reinforces our sense of purpose. All your achievements and the rewards you’ll receive will be meaningless unless you’re passionate about what you do. So be determined and dedicated to whatever you want to succeed in, in life. Take advantage of the help offered you and remember that success is attainable for everyone.”