Hard work pays off as opportunity awaits the Class of 2017. 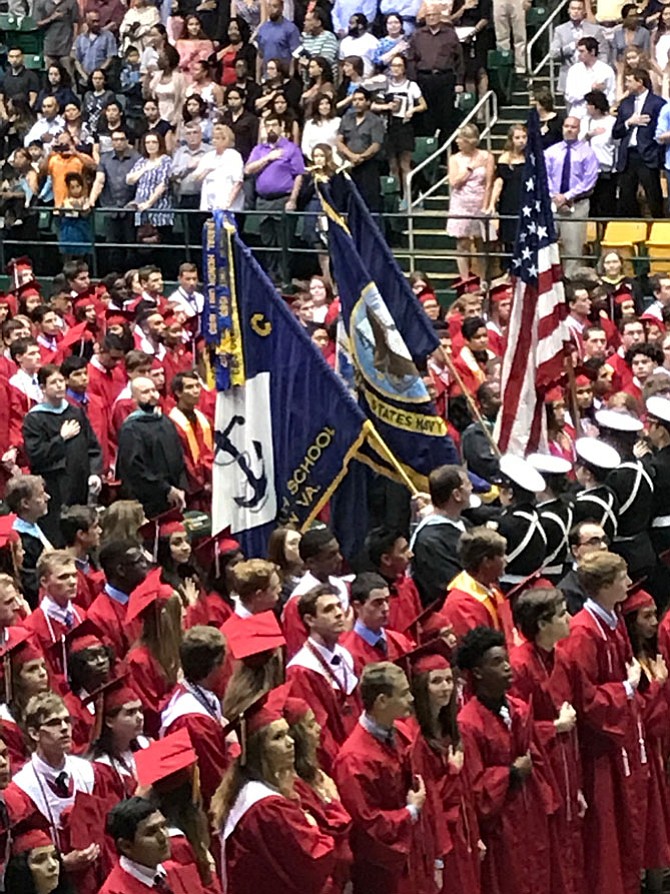 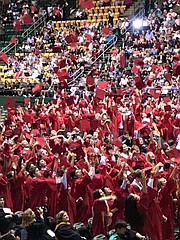 The Herndon High School Class of 2017 toss their caps in the air at the conclusion of their graduation ceremonies held Monday evening, June 20. Guest speaker, NBC Channel 4 Anchor, Angie Goff urged the students to go outside their comfort zones and not be afraid to try something new, even if the outcome is unsure.

For the 426 Herndon High School students, the graduation ceremony held Monday, June 19 at EagleBank Arena, George Mason University, will be an event they will always remember. Not only because of the lessons learned in the classroom but those outside the classroom as well.

"Life is all about learning,” said Grant Bommer, a member of the 2017 Class Council in his parting remarks. "And as long as you learn from your past mistakes, they aren’t so much failures, but rather lessons for the future."

Maddy Johnson, another member of the 2017 Class Council, spoke about the student body's Kids at Hope Pledge, one that for four long years gave them hope. The pledge reads, “I am a Kid at Hope. I am talented, smart & capable of success. I have dreams for the future, and I will climb to reach those goals & dreams every day. All Children are Capable of Success, No Exceptions!” Johnson said. "It’s that setting goals and having something to work towards that gets us up in the morning and keeps us working long into the night."

The third Student Council member to speak was Cyril Antoney who thanked those who supported them. “Of course, we couldn't have taken risks and followed our ambitions without our teachers, our counselors, and our family members," Antoney said to the audience.

DR. LIZ NOTO, Herndon High School Principal, recognized the students in the class of 2017 who were true academic scholars, those who took the most challenging courses and succeeded. She said, "They are our best and brightest and have participated in every aspect of student life. They are outstanding musicians, thespians, student government and club officers, athletes, and volunteers with hundreds of hours of service to their churches and community.” Noto reported that the class of 2017 received more than $3.7 million in local and national college scholarships.

Noto presented The Faculty Award, the highest honor awarded annually to the young man or woman considered the most outstanding senior, to Ryan Alcorn, founder of The American Veterans Support Group, who Noto said is one of the most inclusive people you will ever meet. "This humble young man is always looking for ways to make a difference; is greatly respected in both the school and the community; and has touched many lives in his four years as a Hornet."

It is a tradition for the senior class to give back something back to the school in appreciation for all the help teachers, counselors and everyone in the community have given them. Rochelle Barasona presented a class gift that the Student Council hoped would have a direct impact on the other students. The gift, a spirit bag, was meant to encourage greater enthusiasm, liveliness, and passion within the school. "At the beginning of the next school year, each student will receive a bag containing various spirit items. The objects are to be used during pep rallies and other school-sponsored events to promote unity and boost student morale within the school," Barasona said.

WITH FAMILY, friends and distinguished guests watching on, Noto presented the diplomas. After the last student had received a diploma, Noto asked the graduates of the class of 2017 to stand.

Noto said, "By virtue of the authority vested in me as the Principal of Herndon High School, the laws of the Commonwealth of Virginia and the Governing Regulations and Policies of the Virginia Department of Education and the Fairfax County School Board, I hereby confirm that the seniors of the class of 2017, whose names have been presented to me, are graduates of Herndon High School. Graduates, you may shift your tassels from right to left.”