Once-Hidden Life Gets a Fresh Start

Fairfax — Like all human beings, Scott Silverthorne is flawed. But unlike many others, he’s determined to change his ways for the better.

Granted, it may be tougher for him since – after spending half his life as an 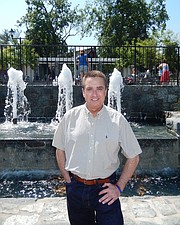 elected official – he’s still in the glare of a public spotlight. Yet now that he’s a private citizen, he has the time – and, more important, the drive – to focus on the work ahead of him.

The last three months have been the hardest of Silverthorne’s life. After being considered no less than a hometown hero for his decades of public service to the City of Fairfax, he found himself behind bars. Caught in a police sting last August, he was talked into bringing crystal meth to what was supposed to be a sexual encounter between fellow gay men.

Later convicted on a drug-distribution charge, he was jailed just a few blocks from the City Hall where, for years, he proudly represented Fairfax as a councilman and mayor. However, his failing never involved dealing drugs but, rather, becoming addicted to them.

“I screwed up,” said Silverthorne. “I pled guilty in March, after long consultations with my attorney, Brian Drummond. I understand the law, however nuanced it may be. But I’m not a drug dealer, nor have I ever been.” As a gay man, he said, “I wasn’t fully comfortable with who I was, so drugs – specifically, crystal meth – were a coping mechanism. My biggest mistake was ever trying it.”

ON JUNE 9, he was sentenced to the three months in jail he’d already served, placed on three years’ probation and released. Now, with the support of family and friends, he’s rebuilding his life, and the only newspaper he’s speaking with about his situation is the Fairfax Connection.

“It was so frustrating for me, the past year, to stay underground and out of the public eye over this issue,” said Silverthorne. “People were asking in public meetings and on social media why I wasn’t making any public statements. Under strict guidance from my attorney, I couldn’t. But now I want to share my story with anyone who cares, in hopes that it will help with my healing and the healing of the community.”

Noting that he’s lost friends to crystal-meth addiction, he said getting arrested “probably saved my life.” But the circumstances of his arrest, and the aftermath, troubled him. “I always wanted to take responsibility for my personal shortcomings and for what I did – but not for what I didn’t do,” he explained. “The story’s sensationalism grew over the months following my arrest. Of course, it also centered around sex – which was grossly exaggerated. I was not charged with a sex crime.”

From the very beginning, Silverthorne cooperated with the Fairfax County police and, indeed, was initially released on personal recognizance. So, he said, “I was disappointed in their press conference [about the incident]. They misrepresented the amount of meth as 2 grams, but their own lab report came back as less than a gram.”

Furthermore, he said, “I think the police had an obligation to tell the truth; they greatly embellished the amount of the meth and the sordid details about sex. The county law-enforcement community had had a bad year, coming off the killing of the unarmed John Geer and the taser death of Natasha McKenna, a female inmate in the county jail.”

So, said Silverthorne, “They were looking for a way to finally get something right. They thought they landed a big fish; but in reality, they arrested a drug user, not a drug dealer. I have great respect for the rank-and-file law-enforcement officers, but have lost respect for the Fairfax County police brass due to the handling of my case. After my close, working relationship with Fairfax City police, I believe our team in the City runs circles around the county police.”

After pleading guilty in March, he was immediately incarcerated until his sentencing. He was in solitary confinement, his first week, and then held in protective custody with two other men, for the duration.

“I spent most of my time in jail reflecting, reading 15 novels and sleeping,” said Silverthorne. “In truth, it was terribly boring for someone like me who’s used to being so active and among a lot of people.” In many ways, he said, the residential, drug-rehabilitation center he voluntarily placed himself in last summer was “a much tougher experience” because he was forced to attend drug-treatment programs every day from 7 a.m.-9 p.m.

“One of the things I learned during those five-and-a-half weeks in rehab was that the issue was not so much drug abuse, but psychology,” said Silverthorne. “Why do we make the decisions that lead us down the path of drug abuse? And, without question, being gay had led me to internalize issues surrounding that. I spent the first half of my life hiding the fact that I was gay, and the second half hiding my drug use.”

He said no one knew that he was abusing drugs – not his family, his closest friends and, most especially, members of City Council. “I was disheartened that some citizens accused them of covering for me,” said Silverthorne. “The reality was, if they had known, they would have kicked my butt. Every City Council member was shocked and amazed that I was leading this lifestyle.”

According to drug-rehabilitation professionals, meth use is rampant in the gay community. And in many ways, said Silverthorne, “After my first use, my brain was rewired. Meth is three times as strong as cocaine, as measured in the units of dopamine released in the brain.”

IN HIS CASE, he was a binge user. “I didn’t use every day or every week; but when I did, I’d often use for three days in a row – and then not again for a month,” he said. “While I’m not proud of what I did, this was a personal failing, not a professional one. I never used drugs when I was being a substitute teacher or conducting City business.”

When people first found out about his drug use, said Silverthorne, they were “shocked and angry. But now they realize I’m human and have taken responsibility for my mistakes. In jail, I tried my best to think about my future – righting my wrong and rebuilding my life – which is made more complicated by my felony conviction. But I had a hard time focusing on my future because of the uncertainty surrounding my sentencing. However, my planning will really begin in earnest, now that I’m free.”

He considered relocating and starting fresh elsewhere. “But the majority of the Fairfax community has continued to embrace me and has surprisingly welcomed me back with open arms,” he said. “So I really don’t know what the future holds for me. The literally hundreds and hundreds of letters I received in jail sustained me. I knew from them that people care about me and want me to succeed in the future.”

“If I wasn’t mayor, I’m not sure this sting ever would have happened,” continued Silverthorne. “But it’s probably the best thing because I’m now on the path to recovery. I’m going to get a sponsor and continue going to NA [Narcotics Anonymous] meetings. I’ll also reach out to people to thank them for their love and support. I was embarrassed that I had a problem; but once I came clean and admitted it, it was liberating.”

Saying he’s “terribly sorry for the suffering I put my family, friends and hometown through, over the past 10 months,” he’s also grateful for the opportunity he was given. “I want to thank my community for believing in me, supporting me and giving me the highest honor of my life – to serve as both a Council member and mayor of our great City,” said Silverthorne.

“I remain optimistic that my future may be even more fulfilling and exciting than my past,” he added. “While I never say ‘never,’ I have no intention to seek public office again because I want to explore what other opportunities may exist for me. Time will tell, but I’m hopeful that, over the next few years, I will again earn people’s trust and respect.”