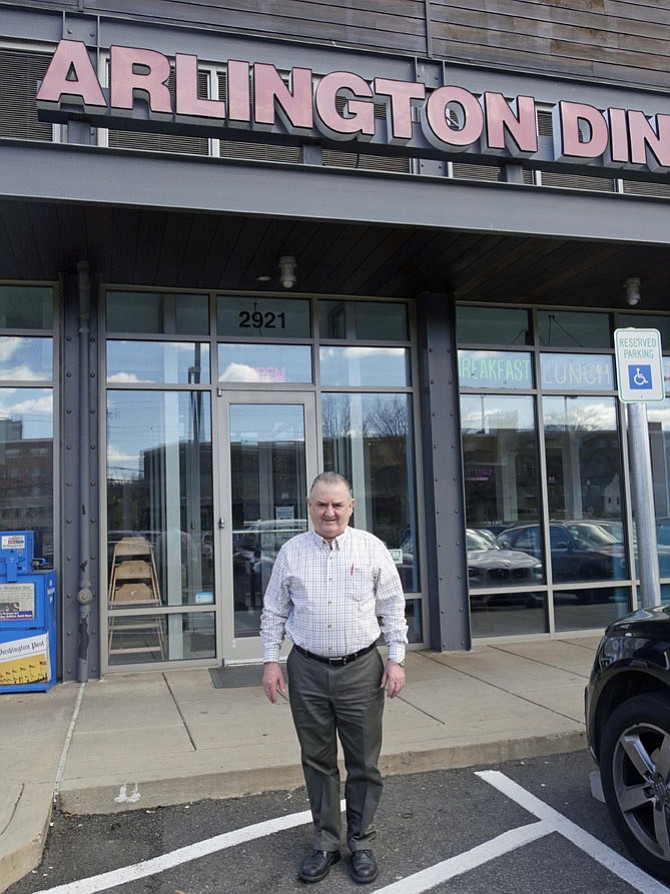 Louie Alpos stands outside the Arlington Diner where, except for a few short trips home to Greece, he has spent 364 days a year for 32 years. The diner is scheduled to close "probably the third week in May." Photo by Shirley Ruhe. 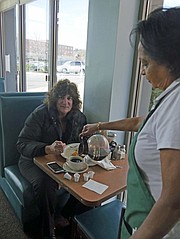 Bmebet Reggasa pours coffee for Lisa Long at the Arlington Diner on S. Glebe Road. Reggasa has been a waitress at the diner for 31 years and says it is like family. 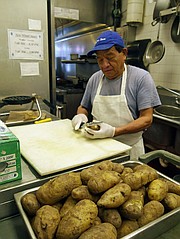 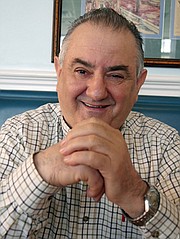 Louie Alpos contemplates what he will do when he closes the Arlington Diner after 32 years. His feelings are mixed but he is thinking about it and says everything is open.

An Arlington institution is disappearing. After 32 years on S. Glebe Road the Arlington Diner will close its doors on ..... "You know I haven't picked a date, maybe the third week in May," said Louie Alpos, the owner of the Arlington Diner. "I lost my lease. I asked for another 10 years but they would only give me 1-5 years." He says it isn't long enough to make back the money on the changes he'd like to make to the diner. Alpos points out the booths are 15-years-old, and he needs to replace the counter. He adds that expenses keep going up every year and it costs close to $75 per square foot to lease the space.

Bmebet Reggasa pours a cup of coffee for a customer. "Bmebet has been with me for 31 years. When we came here we were both young and now we're still here." Reggasa says she doesn't know what she will do when the diner closes. "It's sad; this is like a family." Alpos says all of his employees have been there for at least 15 years. "They don't leave."

A bright green sign on the front window advertises "Breakfast." Lisa Long sits by the window getting a coffee refill and finishing her "eggs, toast … the whole shebang. I love diner food. I don't like fancy places or junk food. This is my kind of place."

Alpos says some years ago he decided to offer breakfast all day and open earlier and this has helped his business. Some customers stop by every day for breakfast or lunch.

Alpos says last year business cut off, possibly because people know he will be closing. He says it will be a big surprise when they show up to see whether he closes or not.

Today's specials written in ink on a large index card include a bowl of bean soup or the special lemon-rice plus a grilled cheese sandwich for $6.50. He remembers when a bowl of soup was $1.25. "I was very cheap; rent was low." The lamb shank dinner, which is $12.95, used to be $5.95. "I used to buy a lamb and cut it up myself into lamb chops, roast leg of lamb and pieces for stew." But he stopped 5-6 years ago. "It takes a lot of time, and I don't sell it like I used to."

He says salads and fish and chicken have taken over from lamb and beef that used to be popular. He said, "When I start here, I have different people. They say why not put lamb on the menu. But they move away." Now the omelets are a customer favorite. "Personally I like Louie's Greek Tycoon that has gyros, ham, sausage, bacon, onions and peppers, Feta cheese, black olives and potatoes — everything." The menu also advertises a Greek omelet, which is tomatoes and feta cheese.

Alpos says years ago and he used to work in a restaurant and then one day he found out he could do it by himself. So in 1987 he opened Arlington Diner and "well of course I cook the first 3-4 years." Later he hired cooks but he has always cooked the specials by himself. Now he is there at 6 a.m. in the morning and stays until 2 p.m. when he takes a short break and returns at 5 p.m. "I work 7 days a week with Christmas my only day off all year."

He says he doesn't know how life will be without work. "Well, my feelings are mixed. I need a little time off. But I've worked for 40 years." Alpos says he is thinking about it. "I will probably go visit my relatives in Menidi, a small village in Greece, more often and stay longer." He may start another restaurant in a while. "Everything is open."