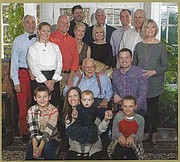 Bob Michel, seated, in a recent holiday photo with his family.

Bob Michel with a Chicago Cubs “W” flag after the team won the 2016 World Series.

To many, Bob Michel will be remembered as the longtime Illinois congressman and skilled politician who served for 38 years in the U.S. House of Representatives. But those close to him will remember his frequent Saturday morning visits to the Royal Restaurant and love for singing Sinatra.

Michel, who called Northern Virginia home since first being elected to Congress in 1957, died Feb. 17 at Arlington Hospital Center. He was 93.

Born March 2, 1923, in Peoria, Michel represented central Illinois' 18th congressional district and served as minority leader from 1981-1995. He served as president of his class at Peoria High School and attended Bradley University for one semester before joining the army during World War II.

Michel served with the 39th Infantry Regiment, landed in Normandy as part of the D-Day invasions and was wounded in the Battle of the Bulge. He was the recipient of a Purple Heart and two Bronze Stars.

After the war, he returned to Bradley where he sang in the chorus and met his future wife Corrine. He graduated in 1948 and took a job as an aide to congressional candidate Harold Velde. Michel served under Velde from 1949 to 1956 then succeeded him in 1957.

After leaving Congress in 1993, Michel joined a lobbying firm where he worked to gain funding for the National Institutes of Health. He founded the Bob Michel Veteran Health Centers.

Michel was awarded the Presidential Medal of Freedom in 1994 and the Congressional Distinguished Service Award in 2003. He was predeceased by his wife in 2003 and is survived by four children: Scott, Bruce, Robin and Laurie Norcross of Alexandria.

Funeral services were held Feb. 25 at the Renaissance Coliseum at Bradley University and flags at the Capitol flew at half mast in his honor.

Ray La Hood, who served as Michel's chief of staff and succeed him in Congress, will host a memorial for Michel on March 9. A private celebration of Michel’s life will be held at the Capitol Hill Club, where the coat room has been named in his honor.