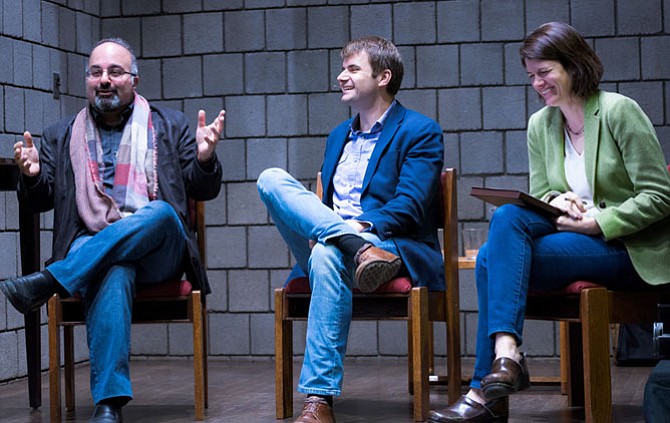 Safi, who was born in the United States and lived many years overseas, is of Iranian descent and describes himself as both a citizen and an immigrant. He called for Americans to measure their greatness by their goodness, by how the nation treats its poor, orphaned, weak, and exiled. Things get better in societies when people stand together, he said, and say “we are in this together … We should not do to other people’s babies what we wouldn’t want done to our own.”

Justice is what love looks like when it’s practiced in the public square, he said.

“When we extended our invitation to Dr. Safi over a year ago, we had no idea he would be presenting in such a climate,” the church’s co-pastor, the Rev. Meg Peery McLaughlin, said. “There could be no more timely topic than ‘rising above fear.’” Safi specializes in contemporary Islamic thought and Islamic spirituality. He is the chair for the Islamic Mysticism group at the American Academy of Religion, the largest international organization devoted to the academic study of religion. He has edited and authored multiple volumes, including “Memories of Muhammad,” an award-winning biography of the prophet. The event at Burke Presbyterian was made possible in part by the Beth Braxton Speaker’s Endowment Fund. Rev. Braxton served as pastor of the church from 1984-2011. Learn more about events and activities at Burke Presbyterian by going to www.burkepreschurch.org.