Lucky Half Penny in Fairfax County

Supervisors intend to drop a half-cent from the proposed 2.5 cent increase in real estate tax rate. 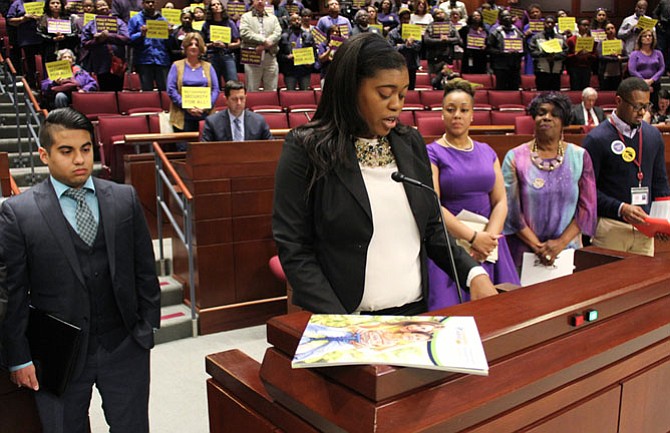 April West, a Fairfax County employee and union member, spoke about the importance of retirement security for working families at public hearings before the Board of Supervisors earlier in April. Photo contributed

The Board of Supervisors will drop one half cent for the FY 2019 advertised budget.

“This is the fewest number of changes we’ve made to the budget in recent years. And I think a lot of that is a reflection on our desire to fund a lot of needs that exist in the county,” said Lee District Supervisor Jeff McKay, at the board’s budget committee meeting on Friday, April 19.

The board meets on Tuesday, April 23, after the Connection’s presstime, for a full-day to make changes to the advertised budget, the markup process.

The Board of Supervisors will officially adopt its FY 2019 Budget on May 1.

“The recommendation is to go from a two and a half cent increase to a two cent increase, so going to $1.15 as the new rate for FY 2019,” said Joe Mondoro, the county’s chief financial officer/director.

That translates to a drop from $268 to $241 for the average taxpayer on this year’s real estate bill.

“We need to identify $12.3 million,” said Mondoro. “We are doing that in proportions, schools and county, just as we did with the building of the budget, so the impact is felt by both and as a result of the actions will maintain the 52.8 percent allocation to schools and will maintain the same growth rate for county and schools. That growth rate will be 4.2 percent as a result of this action. For the school side, the adjustment is $3.6 million.”

Supervisors expressed concern that they are providing more money to schools for teacher salaries, but schools plan to spend more than $17 million of the funds for administrators, not teachers.

“The bottom line, for me, is that they are still talking very significant increases for administrators in one year,” said John Foust, Dranesville District supervisor.

SEVERAL SUPERVISORS complained that they needed detailed information from the schools about raises for administrators, but they hadn’t gotten that information as the vote approaches.

“I don’t think we have the information we need to get them that money,” said Foust.

“Tuesday is going to come real quick,” said Foust. “They have to lay it out.”

Pat Herrity added that School Board members hadn’t gotten the answers to these questions either.

IN AN UNUSUAL TWIST, the General Assembly has still not approved the budget, injecting some uncertainty to how much the county and schools can expect to receive.

But overall, the news on state funding appeared to be good, with additional revenue from the state included in all three versions of the state budget, House of Delegates, Senate and Governor.

“As the board is aware, there is not yet a state budget. However, the $900,000 that we’re identifying here is included in all three the Governor, the House and the Senate versions of the budget so staff felt comfortable that recognizing this amount of money add on, which is typically what we would do, made sense,” said Mondoro.

“And so the addition of that $900,000 to the advertised balance that the county executive identified for you in February of $3.9 million means going into markup there’s $4.8 million available to the board,” he said.

Negotiations continue at the state level about expanding Medicaid, with the House of Delegates’ and Governor’s versions of the budget including the expansion. With expansion of Medicaid comes significant extra funding.

“Should Medicaid expansion happen, we should make sure as quickly as possible that we sit down back at this table and take a look at the results of that will be,” Chairman Sharon Bulova said.