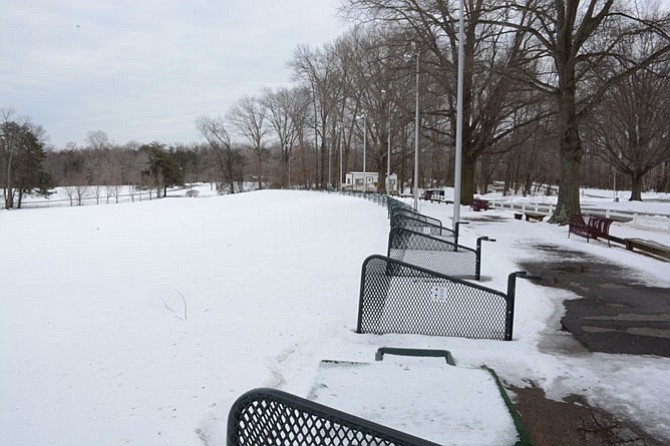 The driving range at Burke Lake Park is uncovered, but in season offers “dew-chasers” the opportunity to tee off early in the morning. Photo by Tim Peterson. 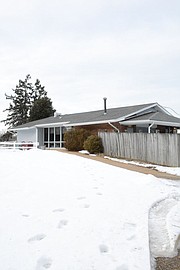 The Burke Lake Park golf clubhouse is due for an upgrade, though it won’t be in the form of a large commercial development.

Burke resident Meg Hanrahan likes Topgolf in Alexandria. “To go out on a date with my husband,” she said, “but it’s not some place I want to go when I want to mentally prepare to go out on a course and play 18 holes.”

A bar-lounge atmosphere of is also not one in which she would consider leaving her three daughters, once a little older, to hit buckets of balls themselves.

Hanrahan is president of the Burke Lake Women’s Golf Club, which uses the course, range and clubhouse at Burke Lake Park.

Recently, members of the community held a public meeting to discuss the unsolicited proposal the Fairfax County Park Authority received from KC Management to upgrade Burke Lake to a facility with an increased structural footprint and parking, reminiscent of the golf center in Kingstowne.

Supervisor Pat Herrity (R-Springfield) attended the public meeting and then scheduled an additional meeting with Park Authority staff to follow-up.

“It was clear this isn’t going to happen without significant impact to the community and without raising the prices for golf, to use the driving range,” said Herrity. “Those are both unacceptable to me and to the Park Authority. I didn’t have to do any arm-twisting.”

In his newsletter released on Feb. 23, Herrity lead with the headline “Top Golf Bottom Option for Burke Lake” and announced that the Park Authority would not be going forward with the proposal from KC Management.

Fairfax County Park Authority director Kirk Kincannon was not available for comment, but Judith Pedersen, a spokesperson for the parks, said in a statement, “We were concerned about the scale of the project which seemed too large for the site.”

THE FACILITIES, which date back nearly 60 years, are overdue for upgrades and are slated to receive them per Park Bonds passed in 2008 and 2012. KC Management submitted its proposal under the Virginia Public-Private Education Facilities and Infrastructure Act, to build and run facilities on public land.

But members of the community bristled at the idea of the larger complex being proposed. Homeowners created a “Save Burke Lake” Facebook group as well as a Change.org petition to raise support of opposing the proposal. Bob Vitti, one of the senior golf instructors at Burke Lake, sent the petition to his 1200-odd roster.

“I think it did something in terms of the significant count on the petition,” said Vitti. “A lot of folks had the same perspective I do."

Referring to the Kingstowne center, he continued, "I don’t have anything against it, it’s a nice facility for its own goals, mission, environment. This is just not the environment for this type of service.”

Among the major concerns of Vitti and Hanrahan were that the proposed new facility wouldn’t open early enough to accommodate the strong culture of dawn-rising “dew-chasers,” that more alcohol available on the property would require more adult supervision of minors than currently exists at the park and a larger driving range with nets would take away from the natural beauty of playing in the park itself.

“You look at it and think goodness isn’t this gorgeous,” said Hanrahan. “We’re so blessed to have such an amazing park we can play golf at, even if your game is stinking it up.”

HERRITY said the Park Authority will go back to planning for the park’s upgrades and expects concept plans to be ready to share with the public sometime this summer. He also sees the whole situation with the unsolicited proposal as an opportunity to grow organized support for the park.

“We don’t have a Friends of Burke Lake Park currently,” he said, referencing other non-profit organizations such as Friends of Lake Accotink Park that help maintain and protect county natural resources. “What I’d like to see happen is take this energy created around this proposal and create a friends group.”

UPDATED 02/26/15: This story has been corrected to reflect that Topgolf is not involved in any proposals for change to the golf facilities at Burke Lake Park.