Stuck in the Middle in Arlington
Votes

Stuck in the Middle in Arlington

33 households to be permanently relocated in Westover neighborhood. 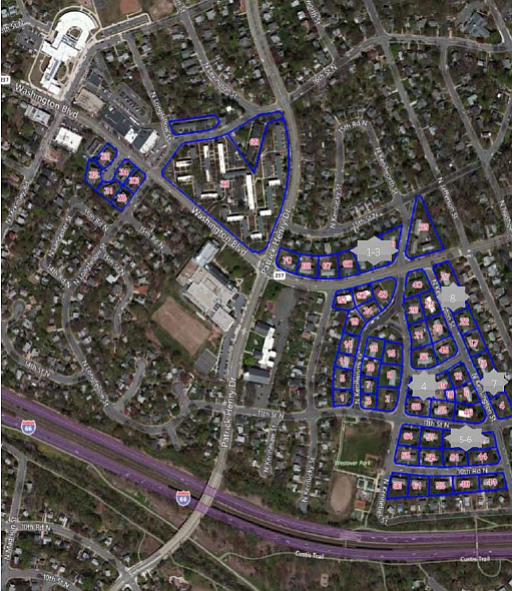 Map of the Westover homes to be renovated and converted to affordable housing. Photo contributed

Westover was dying. In 2016 it became apparent that luxury townhouses were rapidly replacing the traditionally affordable garden-style apartments. On Sept. 24, the county approved a $10.4 million loan to the Arlington Partnership for Affordable Housing (APAH) to buy eight of the remaining Westover buildings and maintain them as affordable housing. But now, in their efforts to save the neighborhood, the County Board voted on May 10 to relocate over half of the residents.

There were four speakers at the County Board hearing, three expressing opposition to the mandatory relocation. Aleksandr Belinskiy, a resident of one of the homes to be redeveloped, said he didn’t understand why some homes that seemed to be in good condition needed to undergo extensive rehabilitation.

Audrey Clement, independent candidate for County Board, noted that there had been no cost benefit analysis on whether to keep residents there after the renovations or whether to force them out.

“This is about [collecting] more tax revenue from the well-to-do,” said Clement, “and less opposition from the rabble.”

Clement and others criticized the County Board for what they saw as further stratifying Arlington’s housing. But Michelle Winters executive director for the Alliance for Housing Solutions, said that the county needs more housing below 60 percent area median income than it does above it. According to Winters, the number of market-rate units at 60 to 80 percent of Area Median Income is 12,000 units, while market-rate units available to those below 60 percent of Area Median Income is at an all-time low of 2,780.

“At the time of the acquisition, it was unclear what the income level of tenants were,” said Winters. “After it was surveyed, it became clear a larger number of tenants were those earning over 60 percent of area median income than expected. It is extremely unfortunate that any households will need to be displaced … [but] clearly this is the income level in greatest risk of displacement from the county. Given these numbers, it makes sense for units to be made available for the lowest income.

The County Board, though expressing similar sympathies for those being removed, said it seemed that everything possible was being done to help facilitate their transition.

“I am mindful of these concerns,” said County Board Member John Vihstadt. “However, sometimes program requirements and practicalities collide with what we might like to have in a perfect world. While I do feel mixed income communities are best, it’s important to remember the context [of the Westover neighborhood] that we will continue to have a range of incomes sprinkled throughout that community.”

Fisette praised the Arlington Partnership for Affordable Housing for their work in renovating and preserving the affordable apartments in the Westover Neighborhood. The board voted 5 to 0 in favor of the relocation, with County Board member Libby Garvey being absent.