Jones Branch Extension will Reach Across I-495
Votes

Jones Branch Extension will Reach Across I-495 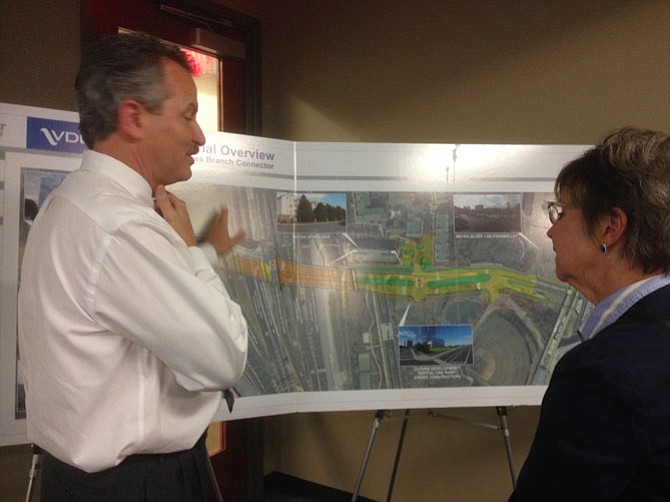 When the Virginia Department of Transportation (VDOT) and Fairfax County are done, McLean residents will have another way across I-495 at Jones Branch Drive and a link from inside the beltway to the I-495 express lanes.

“It’s going to be inconvenient, that’s reality,” said VDOT District Engineer Bill Cutler at their “Pardon Our Dust,” meeting on May 18 in Tysons Corner. “When we complete this project, you’ll be able to access the express lanes from both sides,” he added.

In all, the $58 million project will lengthen the Jones Branch extension from the I-495 express lanes eastward over the inner loop to a point on Route 123 near the Silver Line metro station. This will provide traffic another option to getting across the beltway and relieve the congestion that currently clogs up Route 123 at Tysons Corner. The project will create a continuous median for future transit, on-road bike lanes, and a few more traffic lights.

The project is a joint effort of VDOT and Fairfax County and will be completed by November 2019, according to the VDOT plan. A schedule “I consider to be very aggressive,” said Cutler. The $58 million is a combination of state, county and federal money, he added. The project is a five-phased project where most of the actual construction is taking place during phase II which is scheduled for spring 2018.

The Gates of McLean condominiums are right in the path and have already been impacted by the construction of the extension and a new Capital One building that is going up in that area. With both projects, it will be seven years of construction. Residents are complaining of long waits at the lights and construction that begins at sunup. “They put the Gates of McLean in a huge inconvenience,” one audience member said. The property manager Maria Hatcher noted the holes in the road from all the trucks. “It’s a pretty rough ride,” she said.

The traveling public will feel the pain too. With construction now around I-495, there are slow downs due to narrow lanes in that area, but when the beams for the new bridges are hung, there will be total overnight lane closures, but the express lanes will remain open, and traffic will be rerouted up the exit ramp and down the other side.

This project was eyed to be part of the I-495 express lanes work, which started in 2008, but was shelved due to the expense at that time.

The intersection at Scotts Crossing Road and Route 123 has been causing delays, and frequent travelers have complained to VDOT about a possible turn on red being implemented, so a traffic study was performed, said Abi Lerner, VDOT senior project manager. “Our traffic analysis looked at the sight distance, it’s not safe,” Lerner said. Hatcher called this intersection is a “hot button issue.”