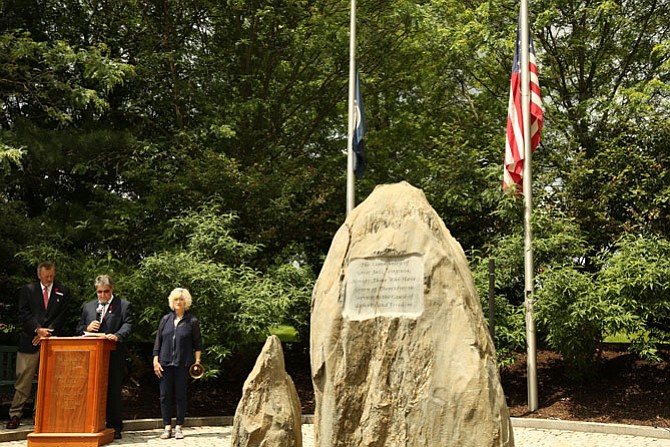 Calvin Follin and Sara Hilgartner conduct the reading of the honor roll and bell ringing to remember the 25 Great Falls residents who died in military service or during the 9/11 attacks in 2001 when American Airlines Flight 77 crashed into the Pentagon. Photo by Fallon Forbush.

The Freedom Memorial behind the Great Falls Library was inspired by a candlelight vigil that was held on Sept. 11, 2002. Six cherry trees located at the gateway to the plaza serve to honor the memory of the Great Falls residents who perished in the 9/11 attacks in 2001 when American Airlines Flight 77 crashed into the Pentagon.

The memorial was dedicated on Nov. 13, 2004, and has been the location of memorial services on Memorial Day, Sept. 11 and Veterans Day ever since. The centerpiece of the memorial is a rock that symbolizes the “ageless beauty of Great Falls and serves as remembrance of all those who have given themselves in the cause of liberty and freedom,” a plaque reads.

Pentagon attack were read aloud at the somber gathering on Memorial Day. Six of the names spoken at the Great Falls Freedom Memorial on Monday, May 29, were of those who perished when American Airlines Flight 77 crashed into the Pentagon.

For the occasion, Robert Vickers Jr., who is known in the community as the Great Falls arborist and chairman of the Fairfax County Tree Commission, was invited to speak about another aspect of his life.

“Quite frankly, for many years I have not been able to discuss my service,” Vickers, a retired Army 2nd Lieutenant, said during the ceremony.

He spoke about his time in the military during the Vietnam War, but his difficulty with the subject wasn’t because of his experience in Vietnam.

“It was a very difficult period,” Vickers said. “Not because I had a bad experience there. I had a wonderful experience.”

It was because of the anti-war sentiment he experienced after the war in the ‘70s.

“It’s hard to talk about a conflict that you’ve fought in but also lost,” he said.

In August 1966, he was sent to Vietnam as a member of the 82nd Airborne Division based out of Fort Bragg in North Carolina.

Vickers was “chair-borne,” he joked with the crowd, and was assigned to the Combined Intelligence Command Vietnam (CICV) unit in Saigon that commissioned special studies, he said.

“I never saw combat,” he said. “I got shot at once in a helicopter, but it didn’t come anywhere 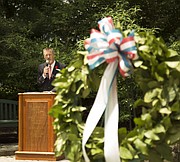 Andy Wilson, veteran and president of the Friends of the Great Falls Freedom Memorial, makes closing remarks after Boy Scouts from Troop 55 laid a wreath in front of the memorial.

The relationships and cultural exchange he experienced during his time at war made it wonderful for him.

“I got to know the Vietnamese people pretty well … we got to work with the Vietnamese intelligence officers and I got invited to their homes and met their families,” he said.

Vickers was given several military honors, including the Joint Service Commendation Medal, which is awarded to service members who distinguish themselves by meritorious achievement or service.

“I have to confess, this is the first time I’ve worn it,” he said.

He experienced conflict as soon as he returned to U.S. soil and arranging to fly to his home, which was in New York at the time. Wearing his uniform so he could get free air fare, the airline employee at the ticket counter ignored him.

Vickers began to realize how powerful the anti-war movement had become, a movement he could understand.

“There’s no such thing as a good war,” he said. “People die on both sides. It’s kill or be killed.”

His time in the military was not something he felt comfortable discussing.

“I didn’t talk about it,” he said. “It was too controversial.”

That changed for Vickers when the Vietnam Veterans Memorial opened in 1982. At first, he did not visit for months. Then a friend convinced him to go and see it.

“I don’t know about you, but having been there, seeing all of those names on that black wall,” he said. “It’s very moving.”

Later, he and his wife decided to visit Vietnam.

“I found Vietnamese people as wonderful as I had remembered them,” he said. “They were very pro-American.”

At the end of his speech, the crowd applauded.