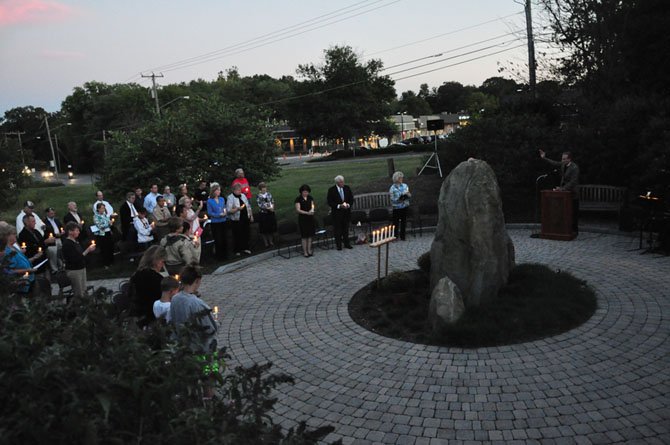 Attendees light candles at the Great Falls Freedom Memorial Tuesday, Sept. 11, in memory of those lost on 9/11. Photo by Alex McVeigh.

Elected officials such as Rep. Frank Wolf (R-10), State Sen. Barbara Favola (D-31) and Del. Barbara Comstock (R-34) were present, along with members of the local Boy Scout Troop 55, who led the audience in the Pledge of Allegiance. 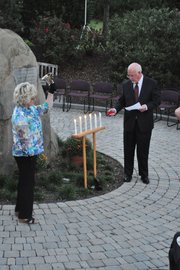 Ed Heberg lights a candle in memory of Diane M. Simmons, a Great Falls who died on Sept. 11, 2001 when American Airlines Flight 77 crashed into the Pentagon, while Sara Hilgartner rings a bell. The six Great Falls residents who died on 9/11 are remembered at the annual ceremony at the Great Falls Freedom Memorial.

“We’re all about service to the community and giving back, and this community has a special place in its heart for the victims of 9/11,” said Tim Feng, 16, assistant senior patrol leader with Troop 55. “This is something we’ve done every year, and it’s always an honor to participate.”

THE KEYNOTE SPEAKER for the event was Rev. John Bradford, pastor of Christ the King Lutheran Church. Bradford served for 25 years in the Marine Corps before entering the Lutheran School of Theology in Chicago in 1993.

Bradford approached 9/11 from a philosophical standpoint, speaking about the paradox that comes with wanting revenge for such a tragedy, but the inherent problems with meeting violence with more violence.

“It’s said that we’re supposed to forgive and forget, and I believe in the first part, but I don’t think we should ever forget what happened on this day 11 years ago,” he said. “May we never forget, may we always forgive, may we always move forward with grace and dignity and purpose.”

Bradford quoted Russian philosopher Semyon Frank, who wrote during World War II, “in this terrifying war, in this inhuman chaos which reigns in the world, the one who first starts to forgive will in the end, be victorious.”

He said that while the world was engaged in a huge conflict, those weren’t necessarily the words people who were losing loved ones and friends wanted to hear.

“It was a bold and maybe a little incredibly idealistic statement at that time, in that time of chaos with bombs falling and million dying, but in the end his words came true,” he said. “At the close of the war, some members of the Allied camp wanted to pursue revenge against Germany, but others remembered how the punitive nature of the Versailles Treaty after the first World War had created bitterness and led to the rise of the Nazi party. So instead of pursuing the revenge, the Allies worked for reconciliation.”

Also in attendance were several flight attendants from United Airlines, which owned two of the planes that crashed that day into the South Tower and in Shanksville, Pa.

ED HEBERG, a member of the Friends of the Great Falls Freedom Memorial, called for a moment of silence for Milburn Sanders, who passed away Sept. 2 at the age of 90. A longtime Great Falls resident,

“Milburn originated almost all of the correspondence between the Friends and Fairfax County, the library board and various elected officials who so strongly supported our efforts to create this memorial,” Heberg said. “He did so much of the negotiating that resulted in the memorial here before us.

The next event at the Great Falls Freedom Memorial will be their Veterans Day remembrance, which will be Sunday, Nov. 11 at 11 a.m.