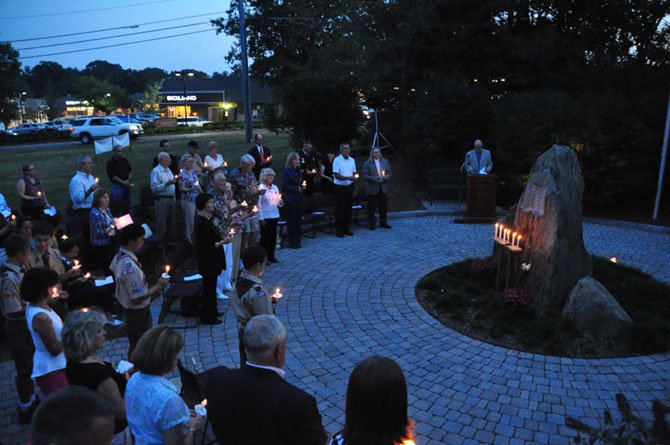 The Friends of the Great Falls Freedom Memorial hosted their annual 9/11 remembrance ceremony Wednesday, Sept. 11. More than 40 people gathered at the memorial to reflect on the 12th anniversary of the attacks, and to pay tribute to the six Great Falls residents who died that day. 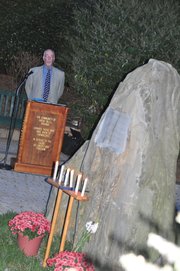 Ed Heberg, president of the Friends of the Great Falls Freedom Memorial, speaks at the annual remembrance ceremony at the memorial Wednesday, Sept. 11.

“The purpose of this monument is to provide a location for Great Falls residents to gather and remember those citizens who died in defense of our country, not only on Sept. 11, 2001, but in all of our previous wars,” said Ed Heberg, president of the Friends of the Great Falls Freedom Memorial. “The monument is the location we use to remember our veterans and our first responders on Memorial Day and Veterans Day, as well as 9/11, or as it’s now known, Patriots Day.”

Members of the St. Thomas a Becket choir and Boy Scouts from Troop 55 assisted with the ceremony, leading the crowd in the National Anthem and the Pledge of Allegiance, respectively.

Zoldus was with the team during 11 deployments to Turkey, Iran, Haiti and Japan, but on Sept. 11, 2001, their assignment took them as close to home as they’ve ever been.

He said after the first planes hit in New York, the team began to mobilize, expecting a possible deployment to assist the New York City first responders. 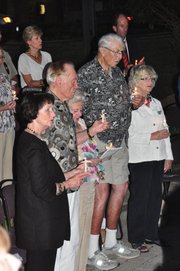 Visitors to the Great Falls Freedom Memorial hold candles to memorialize those lost on 9/11 during the annual remembrance ceremony Wednesday, Sept. 11.

“With events around the world, we have as much as 24 hours to plan and prepare as we travel there, but on 9/11 we were game planning as we were coming down the street as if we were responding to a normal fire,” Zoldus said. “On South Washington Boulevard with the team on buses and our equipment on trucks behind us. Squad leaders were prepping their teams like normal, but when we turned the corner, saw the smoke and saw the collapse a hush went over from the front to the back. There was a lot of ‘Oh My God’ and ‘Can you believe this?’ and then we steeled ourselves and got ready to go to work, because that’s the way we can help fix the problem.”

American Airlines Flight 77 had hit the Pentagon in such a way that a corner of the building had to be shored before the rescuers could enter.

Zoldus said one of his strongest memories was placing the first American flag atop the Pentagon. Not the large one that was eventually draped over the side, but a smaller one on top of the roof, which was brought by two Marines Zoldus escorted to the roof.

“I remember in the hours going into Sept. 12, we had our air tanks and were crawling low to get below the smoke and the dust, and we were searching a hallway door to door and room to room. We opened up one door and crawl in, only to see a pair of immaculately shined shoes and the man wearing them was armed and not happy I was there,” he said. “He asked what I was doing, and I told him we were with search and rescue and he said, very seriously, ‘We’re doing business right now.’ And that signaled to me that the Pentagon was back in service, back protecting this nation.”

ZOLDUS said while Sept. 11 taught him and his team valuable lessons about responding to an emergency, it was the lessons of Sept. 12 that he hopes people learn from.

“It’s the Sept. 12 reaction that I’m so proud of. I was proud to get complaints from the engineers who were rebuilding the Pentagon that it was too hard to tear down our shoring structures to rebuild, because they were too well built. I remember getting e-mails from all over the world praising our team’s work. I remember seeing the Stars and Stripes flying from every pole, porch, mailbox, barn and pickup truck,” he said. “I remember the teamwork, the patriotism, the selfless sacrifice in days following the attack. That’s why Sept. 12 is so important, it showed how our great country responded.”