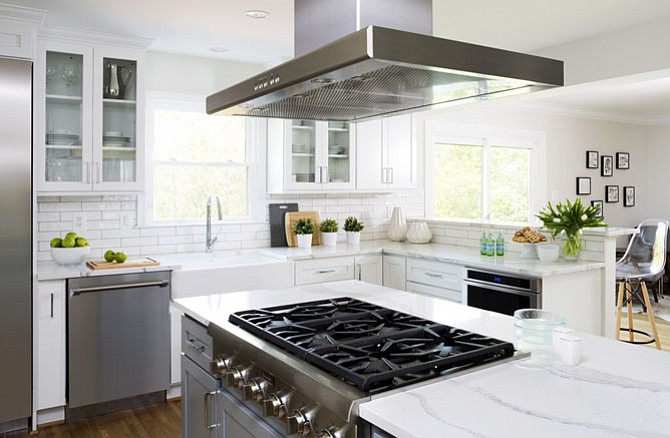 “While they didn’t cook much before, they are now apparently loving the new space so much that they cook and entertain much more frequently,” — Elle Hunter 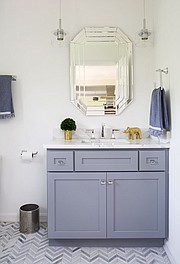 This McLean powder room by Case Design/Remodeling, Inc. was relocated and remodeled to accommodate an expanded kitchen.

When Jason and Jacqueline Adolf purchased their McLean home, their first order of business was to tackle their dated kitchen. They tapped project director Elle Hunter and interior designer Elena Eskandari both of Case Design/Remodeling, Inc. to spearhead the project.

“We began the planning process before they had even closed on the house,” said Hunter.

The new design called for relocating the home’s powder room to create a larger kitchen area. “While they didn’t cook much before, they are now apparently loving the new space so much that they cook and entertain much more frequently,” said Hunter.

The new kitchen is outfitted with a suite of Thermador stainless steel appliances, including a cooktop with a 36-inch island range hood.

“Cambria Brittanica quartz gave the mostly neutral space a nice pop of pattern with its dramatic rivers of black and grey veining,” said Hunter. “Using a soft pewter grey on the island also set it apart from the white perimeter cabinets.”

They removed a wall to open the kitchen to the adjacent family room. “This also [allows] quite a bit more natural light into the space as well as makes access to the deck and grilling area much easier,” said Hunter.