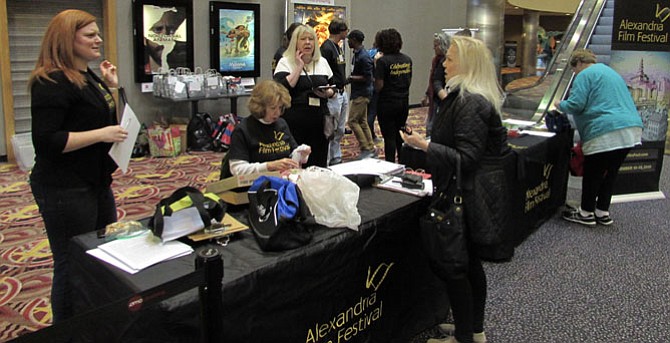 During the approaching Veteran’s Day weekend, the 11th Annual Alexandria Film Festival will showcase 52 independent films for those looking for a taste of culture that they couldn’t get from an ordinary visit to a Northern Virginia movie theater.

From Friday, Nov. 10, through Sunday, Nov. 12, the local film festival will host 17 different screenings — each screening consisting of a different combination of feature and short films. The digital reels will be turning on Friday at Alexandria’s Beatley Central Library and, then on Saturday and Sunday at AMC Hoffman Theatres.

This year, for the first time, Alexandria Film Festival will offer free tickets to veterans for special screenings at both venues. While every work of cinematic art is open and available to the public, the festival’s executive director, Patti North, said it is especially important for members of the veteran community to experience certain films that are a part of this year’s event.

“This is the first year we are offering free admission for veterans’ showcases at AMC,” North said. “I was struck by how great the material is about active duty service members, veterans and their families. These films are such great quality that we decided to assemble them into two special showcases. These showcases are free for veterans and one guest. We have always had programming that was especially geared toward veterans, but, in previous years, we’ve had it at Beatley so that we didn’t have to worry about selling tickets. This year, for the first time, we will feature these showcases at AMC and make it complimentary admission for veterans, first come, first served.”

Civilian attendees pay a modest fee for guaranteed admission to view the sessions at AMC Hoffman.

THE ALEXANDRIA FILM FESTIVAL started with a movement within the Alexandria Commission for the Arts, to embrace art that has emerged as a result of the digital technology.

“We would always talk about what kind of art we wanted to promote in Alexandria,” North said of her time on the Alexandria Commission for the Arts. “We were essentially promoting the kind of art we would have during the Renaissance. It felt like we weren’t acknowledging the digital explosion. So, I went to the commission about promoting some of it, and the arts commission and chair at the time Pat Miller said, ‘go for it.’”

While the Alexandria Film Festival was a part of the commission’s programming for the first six years, it broke away as a separate entity in 2012.

“Over time, the main staff person left, and eventually the city said, ‘we can’t do this like we did it before,’” North said. “So, two other commissioners and I decided to do it ourselves. One of those commissioners, Margaret Wohler, chairs the festival today. We’ve been a nonprofit organization since then, with more than 100 volunteers and an executive committee that is between six and eight people. And we are grateful to the commission and the city for supporting us via the arts grant program. We have learned to be nimble and resourceful, but we are always looking for sponsors, volunteers.”

The small group that kept the Alexandria Film Festival going knew they were providing something important to the community.

“With all the technological advances, filmmaking has become so much more democratized,” North said. “To be able to open a window on another part of the world is very special. For example, we have the Pakistani Academy Award nominee as one of our features, which even though is a fictional narrative, lets audiences see what life is like in rural Pakistan. There are films that bring up fascinating ethical questions. A film festival puts experiences in front of you that you may not have otherwise and gives you the opportunity to think about them and talk to other people about them. This is an experience that you will never get from Netflix or Amazon Prime.”

THE GROWING popularity of the Alexandria Film Festival is clear evidence that other people see the value in it, too. Filmmakers from all over the world enter the festival, and, North said, the host organization has seen a steady increase in audiences over the last decade.

“We have filmmakers coming from as far as California this year,” North said. “One of the winners last year came from Spain. Part of the appeal for them is that this area is a really nice place to stay. We are very grateful to the Hilton for sponsoring hotel rooms for filmmakers, but they pay for transportation themselves.”

Michael Fallavollita, the writer, producer and director of the short film “Tale of the Kite” will be traveling to Alexandria all the way from Pasadena, Calif. for the film festival this weekend.

“I have known of the Alexandria Film Festival for some time now,” Fallavollita said. “In submitting ‘Tale of the Kite,’ I was hoping to be included in the quality films the festival chooses each year. I am always looking for interesting venues to share the film as well as visit states I have never been to before. This will be my first visit to Virginia.”

He, too, is excited to be a part of a weekend devoted to opening the public to an invaluable cinematic experience.

“Being included in this year’s festival is an honor,” Fallavolita said. “Short films are not easy to distribute and when I make movies, I intend for them to be seen on a big screen with an audience. The festival gives me a chance to share the movie the way in which it was intended as well as meet some of the audience members and other independent filmmakers. Going to the movies should be an experience shared with others in a theater, not a solitary moment through the overloaded digital world of the internet. The Alexandria Film Festival gives the audience an opportunity to experience movies, not just watch them.”

“Tale of the Kite,” filmed over an 11-year period, is about a young pilot who finds himself in a dangerously remote area and with few resources to guarantee survival. It will be screened as part of the Burke & Herbert Bank Family Showcase on Saturday.

Fallavollita and about 200 other applicants submitted their short or feature films to the Alexandria Film Festival’s open call.

“Our call for entries goes out on a national web platform, the same platform that Sundance uses,” North said. “Any filmmaker in the world can look on there for film festivals. We have a panel of judges from the community that previews and rates films. Then we pick the finalists. It’s an organic process; we’re looking for films to curate at the same time we are judging submitted films. Then we put together the program very carefully.”

She explained that each showcase session is between two and three hours long, including speakers, so organizing each of the 17 showcases is like piecing together a giant puzzle. Most of the sessions include Question and Answer sessions with filmmakers, 40 of whom will be in attendance this year.

At the end of the festival on Sunday evening, there is a reception and awards presentation. Winners receive “nominal” cash prizes, North said and a custom art glass award.

There are far more than 17 reasons to visit one of the 17 sessions of the Alexandria Film Festival.

“Even for me and the other judges, who stream the films on computers to judge,” seeing them on the big screen makes a huge difference. It’s a whole new experience blown up. You’re bedazzled by the shimmering waves of grain, or whatever scenery it is. You’re also able to meet filmmakers and ask questions and give feedback. Oftentimes, audiences are incredibly sophisticated so it’s fascinating to see their take on these films. It’s overall a really special experience to be there.”

To purchase tickets, and for information about the Alexandria Film Festival, including hours, visit alexfilmfest.com.