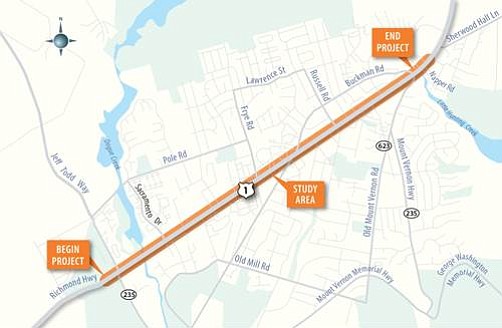 This map shows the stretch of Route 1 that will be widened.

In the display room, the environmental table was set up as part of the VDOT procedure.

Several intersection improvement plans at the Richmond Highway Corridor Improvements public meeting on Monday, Nov. 6 left some residents with more questions then they had before. Is this being done to build a case for a Metro extension, wondered Heidi Kabler, a long time resident of the area. “I don’t understand why you’re making a super highway out of Route 1,” said John Russell. A new storm water basin near the Spirit of Faith Ministries puzzled Christine Brown. “Why did they choose our property?” she asked.

The jughandle eliminates the left turns completely, but requires drivers to go past the road they want to turn left on, turn right, around the jughandle, and across Richmond Highway. This takes less time than the current traffic signals, which go through several cycles at each turn. For example, the current light at Buckman under the traditional option would take seven minutes to cross the highway, and only three to three and a half minutes with the superstreet option. The jughandle option does require the most right-of-way acquisition.

The project is being coordinated with the Embark Richmond Highway plan that was proposed by Fairfax County to create “a multimodal future for Richmond Highway,” according to the Fairfax County website. One part of the multimodal aspect is bus rapid transit, followed by bike and pedestrian venues. There would be bike and pedestrian facilities “on both sides of the highways,” said Amanda Baxter, the VDOT administrator that narrated the slideshow portion of the meeting.

One slide dealt with the introduction of sound barriers that are part of the plan, but there is a long process to decide where they go and the size of the walls. Currently, the plan entails three northbound sound walls, totalling 1,009 feet, and two southbound sound walls that stretch 1,004 feet, but the style and appearance of the walls still needs to be worked out. “Aesthetic treatments will be considered,” said William Dunn, the VDOT project engineer.

Tom Biesiadny, director of the Fairfax County Department of Transportation, joined Baxter on the stage to answer some of the audience's questions. One question was about the business development in the future. “Embark does entail business development and the future Bus Rapid Transit will present options,” he said. Other questions from the audience dealt with cars stacking up at the red lights so they stick out in the roadway, storm water management, smart lights, the gaps between crosswalks and a popular crossing near Costco. Instead of crossing where one of the interchange redesigns would take place, “they all cross at the next light near Costco,” said one resident.

Part of the Embark plan goes into Lee District, so Supervisor Jeff McKay (D-Lee) has been involved in the pedestrian planning, which he called “public safety issues.” Currently many people are crossing at will and not following the crosswalk or crossing lights. “One of the biggest drivers of this plan is the pedestrian features,” McKay said.

Supervisor Dan Storck (D-Mt. Vernon) is also involved with the pedestrian features of the plan. “We have to design it differently to reduce pedestrian-vehicle collisions.”

The question-answer section of the meeting was one aspect that was minimized in past meetings so everyone got their chance to speak up. “Engaging citizens is our best answer for future highways,” said Storck. A comment sheet was inserted in the brochure that were handed out, and VDOT is collecting the comments until Dec. 6.