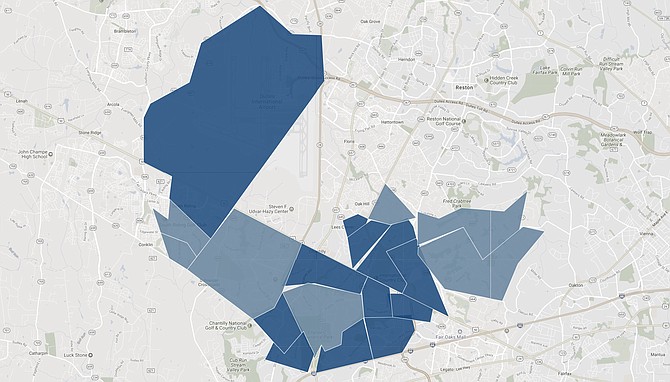 Democrat Karrie Delaney won every precinct in the district. (map from the Virginia Public Access Project)

Democrat Karrie Delaney unseated Republican incumbent Jim LeMunyon in the election last week, swamping him with a decisive victory in a wave election that saw 12 House GOP incumbents unseated across Virginia. Delaney, a former Republican, campaigned on a platform of expanding Medicaid to 400,000 Virginians who live in poverty or with disabilities. Control of the House of Delegates has yet to be worked out, and Democrats may actually be able to get some traction on that issue next year.

“I’m humbled to be elected to serve the people of Virginia’s 67th District and honored that the voters share my vision to rise above the partisan politics in Richmond to find real solutions for the people of Northern Virginia,” said Delaney in a written statement following the election.

Delaney swept all of the Fairfax County precincts, racking up huge numbers in Brookfield and Rocky Run. LeMunyon won only one precinct in the district, Loudoun County’s absentee precinct, by 37 votes. Overall, Delaney took a commanding 58 percent of the vote — a 5,000 vote margin of victory in a district that was seen as a potential bellwether for how the election might turn this year.

"Karrie Delaney’s campaign has reflected her experience advocating on behalf of Fairfax’s most vulnerable populations and services they rely on,” said Virginia House Democratic Caucus Leader David Toscano and Caucus Chairwoman Charniele Herring. "Her commitment to the needs of her fellow Virginians is clear, and we look forward to working alongside her as she serves as their voice in Richmond.”

DELANEY, 38, is a native of Tampa. She moved to Northern Virginia in 2006, eventually settling in Chantilly two years later. She has a bachelor’s degree in psychology from the University of South Florida. Her professional background is in human service, including working as a counselor for children in foster care and as a sexual assault crisis counselor. She later became the director of communications for Shared Hope International, and she now does communications strategy for several nonprofits. She briefly served as a Republican member of the West Melbourne City Council in Florida, an experience she says has given her a bipartisan sensibility that would serve her well as a member of the General Assembly.

“When I had my first job working with children in foster care, I worked at a group home. And in that experience I met young people every day I saw examples of the system failing them,” said Delaney in an interview with Connection Newspapers earlier this year. “So I saw that if we had leadership that really truly put people first, I think we could see a really positive impact in the lives of vulnerable people in our community.”

“It was obvious that Karrie Delaney was the correct choice this election for a safer Virginia.” — Jason Lindsay, executive director of Pride Fund

LeMunyon was first elected in 2009, when he unseated incumbent Democrat Chuck Caputo. During that campaign, LeMunyon focused on transportation issues — a theme that LeMunyon followed through on during his time in Richmond. Now that he and other Northern Virginia Republicans will no longer be at the table, the influence of the region may suffer if Republicans manage to maintain a one-vote majority in the House of Delegates. Whatever happens with the House leadership, its members will have a class of freshmen that are far more liberal than the members who are there now.

“It was obvious that Karrie Delaney was the correct choice this election for a safer Virginia,” said Jason Lindsay, executive director of Pride Fund. "While Jim LeMunyon served in the Virginia House of Delegates, he voted time and time again for dangerous gun lobby bills that would endanger Virginia families and children.”