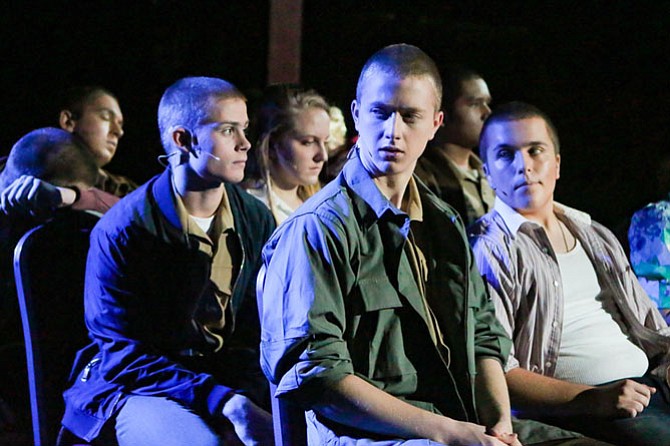 All is fair in love and war. “Dogfight” was performed brilliantly at West Potomac High School and brought the audience on a journey of love and loss. It made its premiere Off-Broadway in 2012 based on the successful 1991 movie.

“Dogfight” tells the story of Eddie Birdlace and his buddies who are recently recruited into the Marines and spending their last days in San Francisco before being sent off to Vietnam. Before leaving, the boys play the game of dogfight. In this game, the Marines ask the ugliest girls they can find to be their date to a party and whoever brings the ugliest girl is the winner. “Dogfight” is the story of Eddie and his date, Rose, and what comes after for them once the game has ended.

West Potomac's production of “Dogfight” was immersive and all-encompassing. The show's overall energy started at a maximum and never faltered. The complex technical elements enhanced the experience and the choreography was flawlessly executed. The entire cast complemented each other, had great physicality, and worked very well together, especially the Marines. These actors trusted each other and were able to increase the realism and enjoyability of the show.

The story of “Dogfight” follows the experiences of Eddie Birdlace, portrayed almost impeccably by Josh Stein. Stein's vocals strengthened each number he was in and rarely faltered. His strong vibrato and vocal inflections allowed Stein to tell the story through his singing. His anguish was especially present in his singing during his powerful ballad ("Come Back"). His chemistry with his love interest, Rose, played by Sophia Farino, improved throughout the show and was very believable throughout Act 2. Farino's talent was shown in several aspects throughout the show with her playing the guitar live on stage as well as her strong vocals. Farino had great facial expressions and utilized these to listen and react without speaking. She also was expressive with her voice, this was especially convincing in "Pretty Funny."

The talent and incredible energy of the leads was matched by the supporting characters and ensemble. Tony Lemus, portraying Boland, took charge and owned the stage with his strong, powerful voice. Tony used an accent throughout and was very committed to it.

Lorna Ryan, playing the humorous Marcy, shone throughout the show. Ryan used an accent as well for comedic effect but committed to it and never once lost it. Her accent was also present during her singing, which only enhanced her especially strong vocals. Her unique voice commanded the stage with Farino during their number, "It's a Dogfight." The ensemble relied on each other heavily and were successful in complementing each other. Their shared talent and incredible compatibility made for great harmonies.

The technical aspects of this show were no less impressive than that of the cast. The set was well-built and extremely detailed. The lighting added to realism and made for some attractive stage pictures. The sound, while sometimes excessive, such as during the war sequence, was greatly executed and the microphones rarely faltered. The props and costumes were designed well and the actors utilized them and brought them to life incredibly. Shifts were handled smoothly, being done by cast members.

West Potomac's production of “Dogfight” was executed brilliantly in all aspects and was a success in conveying the realism of war as well as being historically accurate.