Ring in the Holidays with ‘Peekaboo! A Nativity Play’
Votes

Ring in the Holidays with ‘Peekaboo! A Nativity Play’ 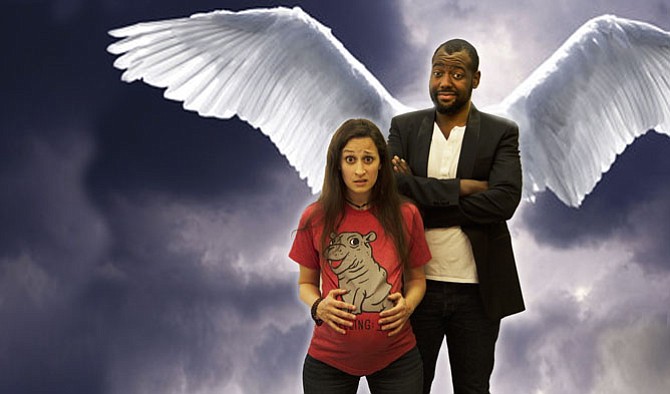 Katie Jeffries Zelonka as Mary and Anderson Wells as Gabriel in “Peekaboo! A Nativity Play.”

The Hub Theatre presents “Peekaboo! A Nativity Play” at The John Swayze Theatre, New School of Northern Virginia, 9431 Silver King Court, Fairfax. Performances: Dec. 1 to Dec. 24, 2017, Fridays at 8 p.m., Saturdays at 2 p.m. and 8 p.m. and Sundays at 2 p.m. Tickets $32 and $22 (students and seniors). Call 703-674-3177 or visit www.thehubtheatre.... Note: There is construction occurring next to The New School of Northern Virginia parking lot. There is plenty of parking, but be careful of changing lanes.

for the Christmas season. It is a contemporary retelling of the Biblical Nativity story titled “Peekaboo! A Nativity Play.” The play is having its world premiere at the Hub Theatre

“‘Peekaboo! A Nativity Play’ is hilarious and also honest and heartfelt,” said Hub artistic director Helen Murray. “The Hub is producing the show because it is everything Hub is about – hope, love, family, music, comedy and magical moments.

“I want people to feel closer to each other when they walk away from Peekaboo!. I want them to hold their families and friends close, to celebrate the season, and to be filled with hope,” added Murray, who is also directing “Peekaboo! A Nativity Play.”

With its focus on how to protect a newborn the whole world has been pinning its hopes on, “Peekaboo! A Nativity Play” follows the Bible quite closely in its modernized comic tale with music under the direction of Jonatan Feuer. A diverse ensemble will portray Mary, Joseph, the Angel Gabriel, Herod and the Wise Men.

Hub veteran Katie Jeffries Zelonka plays Mary. “The opportunity to retell the Christmas story in a way that is fresh, funny, but still carrying a powerful message of hope is very appealing to me.

“Mary is a determined, resourceful, funny, hopeful girl with your typical teenaged flair for the dramatic and a bit of a temper,” added Zelonka. “At the core of it all, she has a big heart and loves completely, which is the driving force behind most of her actions.”

“We know the story and the characters of the Nativity. Or do we?” asked Jacob Yeh, who portrays Herod. “Have we really ever stepped into the shoes of Mary, Joseph, or Gabriel? What about the drummer boy? How would they tell or even sing the story of what happened?”

When asked about the Herod character, Yeh described him as “a loud, despotic, boorish, vain, misogynistic man who sends his goonish sons to do the dirty work in his desperate attempt to hold on to power.”

"Peekaboo! A Nativity Play” is for those especially interested in “a new perspective on the Nativity story without compromising the beauty of the story of Christmas,” said Murray. “It will kindle the sense of hope and wonder of Christmas.” And jolliness is included.