Senators Meet with Leaders of Industry 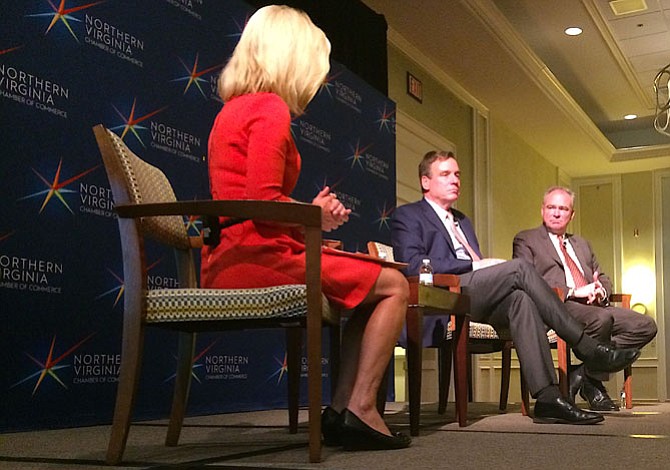 U.S. Sen. Mark Warner says Gov. Terry McAuliffe should pick one region of the commonwealth to compete for landing a second Amazon headquarters in Virginia instead of trying to cheerlead for three different areas simultaneously. U.S. Sen. Mark Warner says the federal government should be allowed to negotiate drug prices through Medicare to bring down the cost of prescriptions. These are some of the revelations that Warner and Kaine dropped on industry leaders this week at a meeting of the Northern Virginia Chamber of Commerce.

“When you heard some of the issues about tax reform, immigration or how we can possibly get Amazon here as a client in the metropolitan area or the state of Virginia,” said Jim Corcoran, president and CEO of the Northern Virginia Chamber of Commerce. "I truly think everything we heard in there would resonate with the business community.”

On the issue of Seattle-based Amazon, the online retailer that’s transforming the country’s economy, Kaine said Democratic Gov. Terry McAuliffe and business leaders should determine winners and losers. Currently, Northern Virginia is competing with Hampton Roads and Richmond to land the deal. Kaine said that means Virginia might be undercutting itself in the long run.

“We’ve got to put our best foot forward,” said Kaine. “That means if a bunch of communities in Virginia are competing with one another ... I can see that as hurting us.”

On the issue of prescription drug prices, Warner announced a change of position. Instead of supporting Big Pharma in its longstanding argument that America’s high drug prices were necessary to fund research and development, Warner said the Centers for Medicare and Medicaid Services should be able to negotiate drug prices through Medicare. By engaging in this kind of negotiation, which already happens at the Department of Veterans Affairs, Warner says drug prices would drop dramatically in the United States.

“I’ve changed on this, and I’ll get some dirty looks from some folks in the room on this one,” said Warner. “But I think it’s no longer right or fair for Americans to pay for the R&D costs for all of the drugs for the whole world.”

THE DISCUSSION veered from tax cuts and infrastructure investments to cybersecurity threats and gun control. One issue that seemed to resonate in the room of business leaders was the backlog in security clearances. Federal officials are currently facing a backlog of more than 700,000 security clearances, which Warner said was unacceptable. When asked about the defense authorization, he said getting a security clearance takes way too long.

“It should not take this long, to have the kind of backlogs on security clearances” said Warner, eliciting a spontaneous round of applause.

“That is only an applause line in one room in the United States,” added Kaine.

The backlog isn’t just a headache for government officials and the contracting community. It branches out into all kinds of industries in Northern Virginia, some of which might not be immediately obvious. Business leaders in the energy industry, for example, are just as concerned about the backlog in security clearances as people who work in defense contracting.

One area where the senators saw some room for potential compromise was the coming discussion on tax reform. Kaine said he hoped the president would not seek to move forward on the issue with reconciliation, a process that would effectively shut the Democrats out of the picture and allow Republicans to move forward with a simple majority vote. Warner said he hoped the president would take advantage of the moment to make investments in the cybersecurity industry.

“Mark Warner mentioned having an incentive for companies investment in the human capital of their workers to help them upgrade to higher skill levels and get a tax credit for doing that the same way they get a tax credit for doing research and development,” said Whipple. "That’s something, in the heavily human capital development businesses that we have in Northern Virginia, could really pay off for them.”

CYBERSECURITY ISSUES became a recurring theme of the discussion, which included not only the prospect that tax reform might offer ways to help people advance themselves professionally. The issue of Russian influence in the 2016 election loomed over the discussion, in part because of Kaine’s role on the ticket. He was the first Virginian to be on a major-party presidential ticket since 1840, when John Tyler joined ran with William Henry Harrison.

“I feel like I’ll be a Hollywood Squares question sometime,” said Kaine. “It was such as bizarre race.”

And then there was the fake news. Kaine said his staff alerted him to fake news stories four times during the campaign. One was that he and his wife Anne Holton have an open marriage. Another was that he was caught on tape yelling at his daughter. Yet another fake news story was the Hillary Clinton and Kaine had a secret deal for years that he would be part of the ticket. He said most of them caused a laugh and then they would move on. But then one emerged that Kaine was on tape yelling at his mistress. As it turns out, it was audio of Mel Gibson leaving a mean-spirited voice mail.

“When I told the story and explained it wasn’t me it was Mel Gibson,” said Kaine, “somebody said, ‘Why was Mel Gibson yelling at your mistress?’”