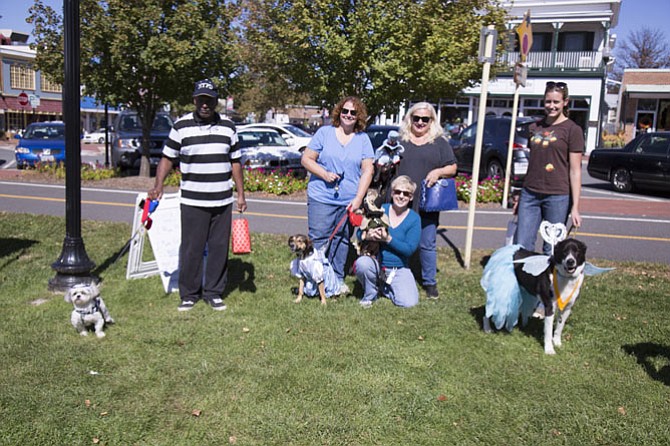 Julie Parkhurst, co-owner and COO of EJ’s Meats & Treats, gives a freebie to Cody, a 7-year-old Pitbull-American Staffordshire Terrier mixed breed. He is currently available for adoption from the Fairfax County Animal Shelter. The dog was transferred to the shelter from Florida before Hurricane Irma struck the state. 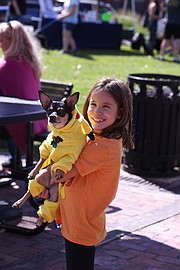 Sabrina Cardwell, 7, of the town of Herndon held her 2-year-old Chihuahua named Snoopy, dressed as Pikachu, before the “Pooch Parade” kicked off. 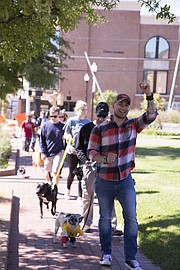 Anthony Nawrocki, 25, a volunteer from the McLean Bible Church, led the “Pooch Parade” around the town square.

They and their pet parents were competing in the Herndon Parks and Recreation Department’s costume contest and “Pooch Parade” during the town’s “Bark Bash.”

Before and after the parade, dog vendors and pet resource providers set up booths on the town square green. Companies selling products and handing out treats and information were:

Goodies from the vendors were contributed to fill gift baskets for the first-, second- and third-place winners of the costume contest, according to John Walsh, a town employee. The costumes were voted on by the vendors and volunteers who helped put on the event.

The fun for Herndon dog lovers is not over.

Walsh and volunteers had 150 red, “Town of Herndon” bandanas to hand out during the event. If people post photos on Facebook, Twitter or Instagram with their dogs wearing the bandanas with the hashtag “#HerndonDogs,” they will be entered to win a fourth prize basket.

The winner of the fourth basket will be announced on the town’s social media accounts on Monday, Oct. 2, according to Walsh.