“Evening Light On The Marsh,” a watercolor by Linda Jones. 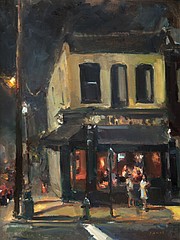 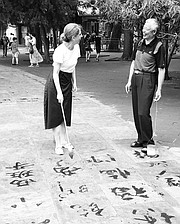 Begoña Morton writing water calligraphy with a Chinese artist at the Summer Palace in Beijing, China.

During the past 12-15 months, the artists of Great Falls have been traveling the globe, finding memorable locations, unique subjects, and new techniques as inspiration for their art. The resulting creations, along with the backstories about them, will come together on the weekend of Oct. 20-22 during the Annual Great Falls Studio Tour. From the frozen landscapes of the Antarctica, the equatorial regions of South America and even the northern latitudes of the Arctic Circle, it seems no place is too distant for this group.

Plein Air (on location) painter Jill Banks is a prime example. She undertook independent on-location painting trips to Italy and Charleston, S.C., this year. She was juried into prestigious plein air competitions in Arizona, Colorado, New Jersey, Pennsylvania, and Virginia and brought back excellent representations of those locations as well as several significant awards.

She said, “Painting on location offers the chance to observe life as it happens and really see the beauty in every day. It’s also just plain fun, as characters wander onto my canvas and visit with me at the easel. Just ask me about painting in the dark at the Night Café.”

Begoña Morton, also a painter who frequently works on location, traveled to China in June where she encountered the art of water calligraphy, as well as to Thailand, Spain and England. She spent the month of August based in a studio near Barcelona.

“Traveling is such a tremendous inspiration for me,” she said. “I especially enjoy going back home to Catalonia every summer, where in addition to catching up with family and friends I take the opportunity to paint local landscapes and still lifes.” Paintings of her summer travels will be on display in her studio during the Tour, and visitors may be fascinated by her stories of life in this intriguing region of Spain.

A total of 50 artists will be participating in the 14th running of this traditional, highly popular event. Dorry Emmer, one of the many tour organizers this year, emphasizes the support of sponsors such as Sun Design, which will have a design home on the Tour Itinerary, as critical to the success of the event. “It is really a community effort,” she said, outlining the volunteer efforts of the participants and the advertising support of many local restaurants and businesses.

Landscape photographer Robin Kent, has been capturing images in the colder latitudes. He spent five weeks in the Arctic Circle last September retracing the full route of the Northwest Passage on a small expedition ship. And this past June, he made his second photographic journey to Iceland. “I’ve long been concerned over what I call the ‘disappearing landscape,’” he said, “and the beauty of these places is vanishing faster than anywhere else on the planet. I am essentially documenting things that soon will be gone forever.”

But faraway places will not be the only subjects on display. Many of the tour locations will feature some unexpected discoveries of the local area that will surprise and delight visitors to their studios.

For example, photographer Walt Lawrence has become a local legend for his comprehensive documentation of Great Falls itself, especially its natural surroundings and the wildlife which inhabits it. This past year was no different as he located and documented the progress of a new bald eagle nesting site in the Riverbend Park section of the Potomac River. In telling the story, he said, “This probably was the most exciting thing to happen in Riverbend Park for a long time. To have a perfect viewing point of this new eagle family a mere 500 feet away is almost unprecedented around here.”

Watercolorist Linda Jones has also found new subject matter in a familiar location, the Chesapeake Bay. She will be unveiling her “Seasonal Patterns” series based on sailing trips around the bay over the past 12 months. Painted in a panoramic format, the series traces the subtle changes of the bay’s waters and other local vistas over the four seasons. “You rarely see watercolors in a wide format,” she says, “But I have found it is especially suitable for the broad vistas one sees when they get out on the water.”

Still another group of artists seemingly have traveled back in time to resurrect and reinterpret methods used by artists of long ago and give them a new twist. Lithographer Will Tuthill will demonstrate how a finely detailed drawing on stone can be transformed into a fine art print using a century-old, hand-cranked cast-iron lithographic press. He will also demonstrate his approach to Moku Hanga, the subtly graceful, ancient art of Japanese woodblock printing that dates back 12 centuries.

Laura Nichols, a potter who was born and raised here, is the founder of Great Falls Studios and originated the concept of the Annual Tour. And she also takes visitors back in time.

“The key is this potter’s wheel,” she said while sitting before a small, circular spinning platform. “I throw a lump of mud onto the wheel and I can shape it into a wonderfully useful bowl or pot in a manner of minutes.” The transformation happens before a visitor’s eyes, almost like magic, yet what she is doing is little changed from its early origins. “The potter’s wheel was invented by the earliest civilizations more than 6,000 years ago,” she said.

On the Sunday of Studio Tour, people will be able to try their own hands on one of her five wheels. “It is as much fun to be a spectator as a participant,” she says, “Both children and adults are welcome to give it a try.”

Lochini Johnston, a painter, has gone back even further, beyond recorded history. She said, “This summer, I have been painting a series on stone, not the usual medium for a painter these days, but I was inspired by my recent encounters with the ancient paintings inside the prehistoric caves of Europe. When you think about it, those early paintings, drawn more than 30,000 years ago, represent the birth of human creativity. I find the depth and understanding they had of media are fascinating. I’m excited to show them to visitors during the Tour and I hope to share some insights into those age-old paintings that inspired me.”

Further information about the Tour and each of the participating artists can be found at www.GreatFallsStudios.com/studiotour. The Great Falls Library (9830 Georgetown Pike) will serve as the Studio Tour Information Center where artist representatives can answer questions and provide directions.