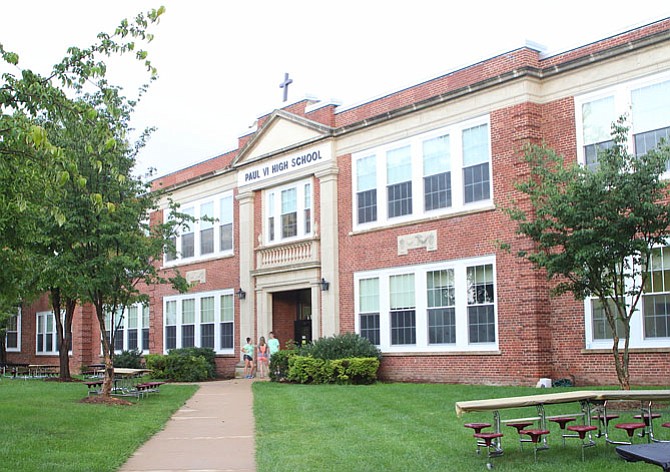 Fairfax — Paul VI High School will leave the City of Fairfax in 2020, so a hot topic of

“The residential density is of paramount concern.”

discussion is how best to redevelop its 18.5-acre site along Fairfax Boulevard. Last Tuesday, Oct. 3, developer IDI Group Cos. addressed a joint work session of the Fairfax City Council and Planning Commission to explains its plans.

The site is within the block bounded by Fairfax Boulevard, Oak Street and Cedar and McLean avenues. Some 66 percent of it is zoned commercial, and 34 percent, residential. There, IDI hopes to create a mixed-use development featuring high-quality design and attractive streetscapes, plus market-rate, affordable and senior housing.

Aerial View of the Paul VI High School site in the City of Fairfax.

designated senior rentals), 220 condos and 110 townhouses – plus 10,000 square feet of retail, and 24,000 square feet for community and other uses inside a preserved portion of the original school building. The retail would comprise the bottom floor of the apartment building.

TO BUILD IT ALL, IDI is requesting both a rezoning and a Comprehensive Plan amendment to allow mixed uses on the site, plus a special-use permit allowing disturbance in the flood plain to create a culvert to reduce flooding. And since the Paul VI building was the original home of Fairfax High, IDI also intends to preserve the property’s history. Its latest application is primarily based on a design scheme that retains the original portion of the school where it is.

IDI would add a shared-use path along McLean Avenue and a 10-foot-wide walkway along the Fairfax Boulevard frontage. Vehicle trips per day are projected to increase by 2,246, but would be distributed throughout the day.

Drivers would access the site via an existing access from Oak Street and several points along Fairfax Boulevard. No vehicular connections are proposed between the site and McLean, Cedar or Keith avenues. A service road would run the length of the Fairfax Boulevard frontage, and Fairfax Boulevard would have slow-lane parking.

However, City officials are still concerned about the project’s high density and minimal amount of open space. And Mayor David Meyer reminded them that, “After the developer is gone, what remains is something we’ll have to live with, for the next generation.”

“Part of the open space is in two courtyard spaces for the residents, but they’re not accessible to community residents,” said Councilwoman Janice Miller. “How much open space remains [if that’s] removed? And with more than 500 residential units proposed – plus visitors, workmen and delivery people – how would there be enough parking? Adequate parking should be provided.”

Planning Commission Chairman Paul Cunningham said the intent of mixed-use was to give more intensity, but provide as much accessibility to the public as possible, and “Accessibility is one of the problems with this development.” He also said any commercial space along McLean would have to be screened, “So we need to look at these uses in more detail.

“We’ve got a very dense residential development [proposed] and a small amount of retail,” he continued. “I don’t know if this is the right, economic use for the City. It doesn’t meet a community need, in addition to the needs of that development’s residents. The overall project I’m not sure hits the target, yet.”

“This project still has a lot of challenges to work through,” added Councilwoman Ellie Schmidt.

But IDI executive Enrico Cecchi said his firm has a proven track record of providing communities that last. “We’re developing the Enclave [residential project],” he said. “It has strong market demand and we’ve developed an excellent working relationship with City staff. We’re over 75-percent sold, with homeowners moving in in December. We study the market to know what product will work well and where.”

He said there’s a big demand for condos in the City, and “We have a reputation for quality. Our product is attractive to seniors, move-down buyers and younger first-time homeowners. At the Enclave, we’ve had 65 percent senior buyers and 35 percent first-time buyers.”

Regarding the Paul VI plan, said Cecchi, “It offers a mix of housing options, provides preserved open space, an improved streetscape, ballfield parking and road improvements. There’s a need for attractive, senior housing, and our townhomes will allow elevators in about 30 percent of them.”

He said there’d be four pocket parks on site, plus linear parks along McLean, Cedar and the site’s western edge. “And the preserved village green in front could be used for farmers markets and music events,” said Cecchi. “We’d improve both the water quality and quantity on the property and reduce the stormwater and pollutant runoff. We’d provide a major upgrade to the City’s sewer system. [Overall], the average, net, fiscal benefit to the City would be between $1 million and $1.4 million/year.”

By right, he said, “There could be a mix of office/retail uses with large parking lots and building heights of 60 feet and five stories. It would mirror what’s across the street. We’ve had three, public meetings, and the community wanted an attractive streetscape along McLean, with height and density tapered toward their neighborhood. Along McLean, Cedar and Pat Rodio Park, we’re proposing three stories.”

Furthermore, said Cecchi, “By right, there’s no requirement to preserve existing structures, approve the Fairfax Boulevard streetscape or provide additional parking for Pat Rodio Park and major improvements to the storm-sewer facilities. We’ve had to balance the opinions of different stakeholders in the community, and we’d like your feedback.”

“The stormwater improvements are a strong pro for this project,” said Schmidt. “But I’d like to see more commercial [use] along Fairfax Boulevard.”

Councilwoman Jennifer Passey wanted more information about how the preserved building portion would be used, and Cecchi said a daycare would be an “ideal use. Also, a full-service or neighborhood restaurant would be good in that area, or a brewery or health-and-fitness uses. A nonprofit associated with the City could also go there, or a community use looking for space.”

Councilman Michael DeMarco asked which housing mixes are in demand here, and Cecchi said apartments, condos and townhouses are all hot. “Over the past year, the Enclave has been the fastest-selling condo development in Northern Virginia,” said Cecchi. “And for-sale is more popular than rental.”

RE COMMERCIAL USES, he said probably two or three, such as fitness, restaurant and daycare. And, he added, “With commercial uses across the street, additional commercial might not be viable.”

Cunningham wondered about the surge parking for the space in front for vendors, customers or concert attendees. “Are you accommodating the parking needed for this type of use in the plan?” he asked.

And Planning Commissioner Janet Jaworski asked why there’s no connection to McLean Avenue. “We’re not opposed to connections there,” replied Cecchi. “But we heard strongly from the residents that they wanted that street improved, while retaining its residential character.”

However, Planning Commissioner Tom Burrell was not at all pleased. “You called things either pocket or linear parks only because that’s the grass you had left over after all the other space was used for other things,” he told Cecchi. “I think it’s way over-developed.”

Agreeing, Meyer said Burrell “summarized the community’s concerns with regard to this project’s density. You still have a lot of work to do and will have to focus on the balance and density of uses, open space and transportation. I don’t think the public is ready to embrace this in a positive way, and the residential density is of paramount concern.”