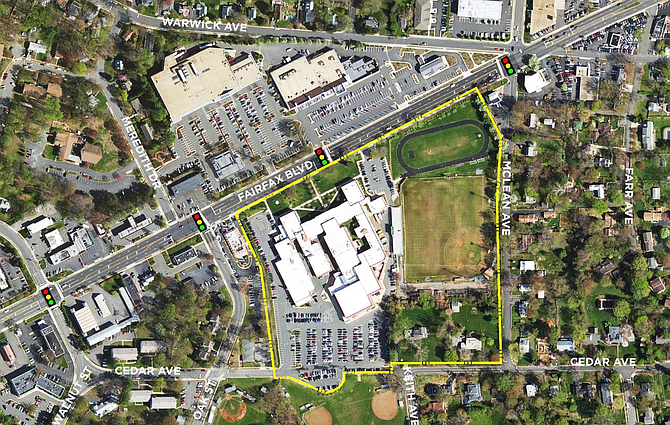 Aerial View of the Paul VI High School site in the City of Fairfax.

Home to Fairfax High and then to Paul VI, this iconic building has been a fixture on Fairfax Boulevard since 1934.

Fairfax City Council held a public hearing last Tuesday, June 12, on a plan to redevelop the Paul VI High School site and was then supposed to vote on it.

Instead – after taking part in the discussions about this project, for the past 2-1/2 years – one Council member was muzzled and prevented from further participation.

Then, after hearing citizens’ comments on the development proposal, Council deferred decision, not until the next meeting, but until September – when two, new Council members not as familiar with this issue and its history will help determine its fate, instead of the two veteran Council members who’ll have relinquished their seats by then.

At the outset, Councilman Michael DeMarco said a community member thinks that, since DeMarco’s wife is a kindergarten teaching assistant at St. Leo’s, he might have a conflict of interests. So DeMarco recused himself from voting on this issue. First, though, he made his own feelings known.

“I don’t play political games and I’m transparent about my opinions,” he said. “And I take this as a personal attack on my family and on my integrity. A sense of place isn’t about what we build, or where, but about how we treat each other as people.”

“Some residents will always be opposed to development,” continued DeMarco. “But between now and 2035, the Council of Governments says Fairfax City will grow by 10,000 people. They’d need 3,500 new housing units, over the next 15 years – and we’re not going to get there by building single-family homes.”

He then left the room and Senior Planner Paul Nabti presented details of the project’s latest incarnation by developer IDI Group Cos. Paul VI will move from the City in 2020, and IDI proposes a mixed-use development on its 18.5-acre site along Fairfax Boulevard, Oak Street and Cedar and McLean avenues.

THE PROPERTY also includes two adjacent single-family lots on Cedar. IDI would add a shared-use path along McLean and Cedar avenues and a 10-foot-wide walkway along the Fairfax Boulevard frontage.

Proposed are 295 residential units comprising 131 townhouses and 164 condos, 20,000 square feet of retail in two buildings, plus 24,000 square feet of commercial and/or community uses in the retained, original portion of the school building. Fifteen of the townhouses along Fairfax Boulevard will be live/work units with retail on the bottom. And the new retail buildings would be one-story and to the east and west of the remaining school building.

“Building heights would be one to five floors, with three floors adjacent to neighborhoods,” said Nabti. “Density would be 16 dwelling units per acre. A four-story, multifamily building would face Oak Street, with a five-story building behind it.”

Drivers would access the site via an existing entrance from Oak Street and four points along Fairfax Boulevard. No vehicular connections are proposed between the site and McLean, Cedar or Keith avenues. A service road would run the length of the Fairfax Boulevard frontage, and Fairfax Boulevard would have slow-lane parking.

To build it all, IDI is requesting both a rezoning and a Comprehensive Plan amendment to allow mixed uses on the site, as well as a special-use permit allowing disturbance in the floodplain to create a culvert to reduce flooding. And since the Paul VI building was the original home of Fairfax High, IDI also intends to preserve the property’s history.

“There’d be a series of private, internal streets within the site,” said Nabti. “There’d be less traffic in the a.m. peak and more in the p.m. peak; 64 percent would be generated by the commercial uses. The number of proposed parking spaces exceeds what’s required, plus they’ll add 60 spaces for use by those attending [adjacent] Pat Rodio Park.”

“The applicant said about 25 percent of the market-rate condos [about 43] would be available for 80-percent AMI [Area Median Income] for workforce housing,” continued Nabti. “The Planning Commission recommended they consider including some affordable housing [60-percent AMI].” He also said IDI planned to contribute $150,000 toward the schools and that City staff recommends approval of the project overall.

Councilman Jeff Greenfield asked what could be built there by right, and Nabti said a 110,000-square-foot shopping center. He also noted that a by-right development would have no requirement to preserve anything, including trees, or to provide parking for Rodio Park.

Councilwoman Janice Miller asked how many schoolchildren are expected to come from IDI’s proposal, and Nabti said 42. She also asked what the building heights would be along Cedar and McLean. Nabti said 40 feet maximum, measured to the center of the roofline.

IDI EXECUTIVE Enrico Cecchi gave much of the credit for the revised plan to the project’s stakeholders. “It’s enabled us to approach this as a partnership between us, the City and the community,” he said. “We’ve held over 100 meetings with the community in the past 2-1/2 years, and it improved the plan significantly.”

Cecchi said the three main issues were density, open space and the commercial component. So IDI removed the multifamily, rental units, reduced the number of condos from 220 to 164 and shortened the condos on the southern side from five to four stories. The amount of open space was increased, and the site will contain pocket parks and a village green; Rodio Park will also be extended.

“We doubled the retail, added commercial buildings and the 15 live/work units,” said Cecchi. “We’ve listened to people and tried our best to accommodate their needs. We made a new streetscape along Cedar and McLean, and 58 percent of the townhouses there are now lower – two stories and 35 feet high. We also made wider homes and added a park at the corner of Cedar and McLean.”

He said IDI will also contribute $50,000 for traffic calming in the nearby neighborhoods. “And the box culvert we’re creating will contain a 100-year storm, improving drainage at the intersection with Route 50 [Fairfax Boulevard] and saving the City $1 million. [Overall], it’s a conscientious, planned development with significant, community benefits.”

Miller asked what he envisioned for the 24,000 square feet of community commercial space, and Cecchi said possibly a brewery with food or a high-end restaurant that would anchor the whole site. She also asked if the condos would contain public, community space, and he said they’d have a clubroom, gym, pool and other amenities.

He also said the estimated time “from site-plan approval to completion – including construction, sales and occupancy – is three years. Our three development phases would happen concurrently.”