Mobilizing for the Biden-Harris Ticket
Votes

Mobilizing for the Biden-Harris Ticket 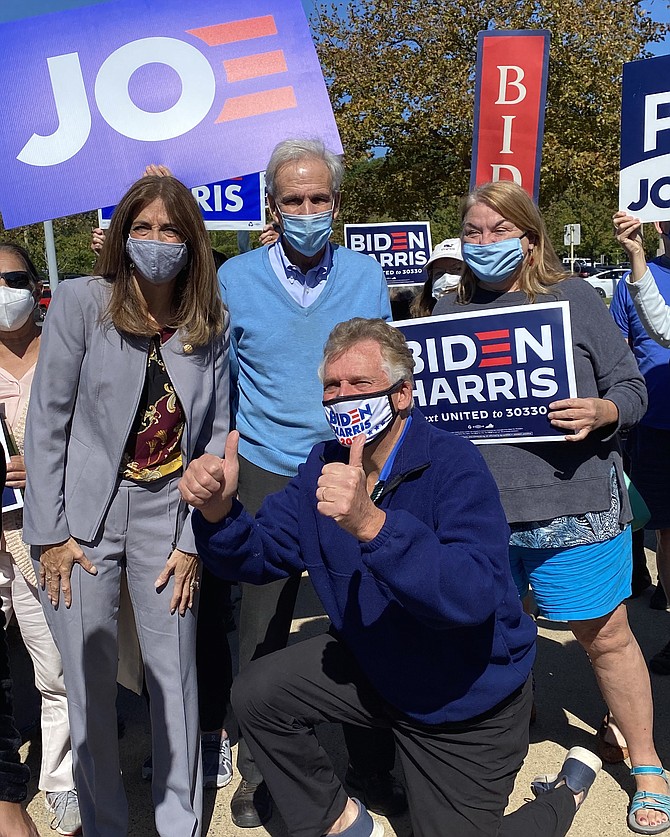 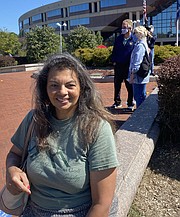 Early voter Nevien Tadross of Vienna: “I've been waiting one hour forty-five minutes. I came today because I set this day aside for voting.” 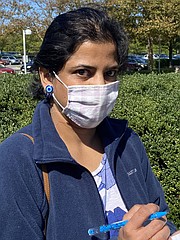 Early voter Lulva Ali of Reston: “Because I believe that we should all vote, and given the current circumstances, it is important that we make a plan, and we make sure that our vote is counted.” 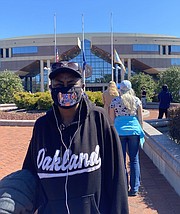 Early voter Lauren Bullock of Alexandria: ”I've been working polls since I was a little girl – with my grandfather, Hurlin Harvey. When he finally got the right to vote, he and my grandmother would do polling booths in their neighborhood, in the days when people would have them in their garages. My job was to count the pencils. Make sure everybody turned in their pencil and I'd pick them up and count them. My grandparents and my parents started me early. I used to precinct walks with my mom.”

The second and third day of early voting at Fairfax County Government Center brought enthusiastic voters exercising their rights to vote and more. Saturday, Sept. 19 was the second day of early voting at the Government Center. Shortly before noon, a group taking part in a "Trump Train" circled their vehicles in the parking beside voters waiting to cast their ballots. Footage shared on Twitter showed Trump supporters waving flags, using bull horns, and yelling at voters through vehicle windows. Later they formed a line beside the voters. According to a statement released Sept. 21 on Twitter by Jeffrey C. McKay, Chairman, Board of Supervisors, "No one should ever feel intimidated when exercising their right to vote and engaging in the democratic process." Voters were moved inside and continued political activity took place a safe distance away from voters, according to McKay.

Speaker Filler-Corn is the first woman handed the gavel in the House's 400-year history. She said nothing was more important than exercising the constitutional right to vote. Motioning toward the voters, she said, "You see what's going on right over there? The long line started Friday, but actually, it started a long time ago. We have been fighting to make it easier for Virginians to vote...This past session, we were able to pass HB1...no-excuse absentee voting...Candidates matter. Elections matter... We have that opportunity... You can vote early. Go to IWillVote.com. Joe Biden and Kamala Harris are doing their part. We'll do ours."

Senate Majority Leader Saslaw spoke next. He talked about mailed absentee ballots and drop boxes. He said, "They are not going to be standing where anybody can mess with them." According to Saslaw there could not be a better ticket than Biden-Harris, two people who reflected the majority of what America is all about. "We've had four years of total chaos through the Trump administration. Think about this, when in anybody's lifetime did 80 former congressmen and senators from the other party endorse the candidate for president for the other party...On top of that...twenty-five people who served the Trump administration are supporting Biden," he said.

Former governor McAuliffe said events like the one in Fairfax were being held all over the Commonwealth that day to encourage voting. "The early vote requests today in Virginia are 865,000. Do you know where they were in 2016? 168,000...In Fairfax, on our first day, we had four times the turnout we had in 2016."

McAuliffe looked at the people in the lines and around him, "Masked... and being saved," he said. "Tens of thousands of people are not alive today because of Donald Trump. He knew about the Coronavirus in November. He knew about it in December. He got an intelligence briefing in January and February. The president said absolutely nothing because he was afraid it would affect his reelection and didn't want to affect the stock market... Donald Trump is about Donald Trump...We've got to get Joe Biden and Kamala Harris in office. It affects our future."

A Question and Answer Session Followed.

Q: The governor's reaction to Trump supporters at the Government Center on Saturday, "a massive rally, kind of in the same area we were shooed away from. What's your reaction?"

McAuliffe: “We want everybody to vote...This is the most important election of all time. We cannot afford because, as we saw with RBG, the court, what is going to happen, it could go to a six-three conservative court. Everything we have fought for...common sense gun restrictions... reproductive rights...That is all going to be put at risk... Stop the nonsense. Let people vote.”

Q: According to a national NBC News/Wall Street Journal poll released yesterday, 11 percent of eligible voters in the United States have yet to decide if they will vote for Biden or Trump. What can you tell about voters who remain undecided with the election just over six weeks away?

McAuliffe: “My guess will be that 100 percent of them voted for Trump in the year 2016. Anybody that didn't vote for Trump sure isn't going to be switching to him now after the chaos he's creating...Eighty percent (of undecided) usually break for the challenger.”