Coordinated by Potomac Chamber of Commerce 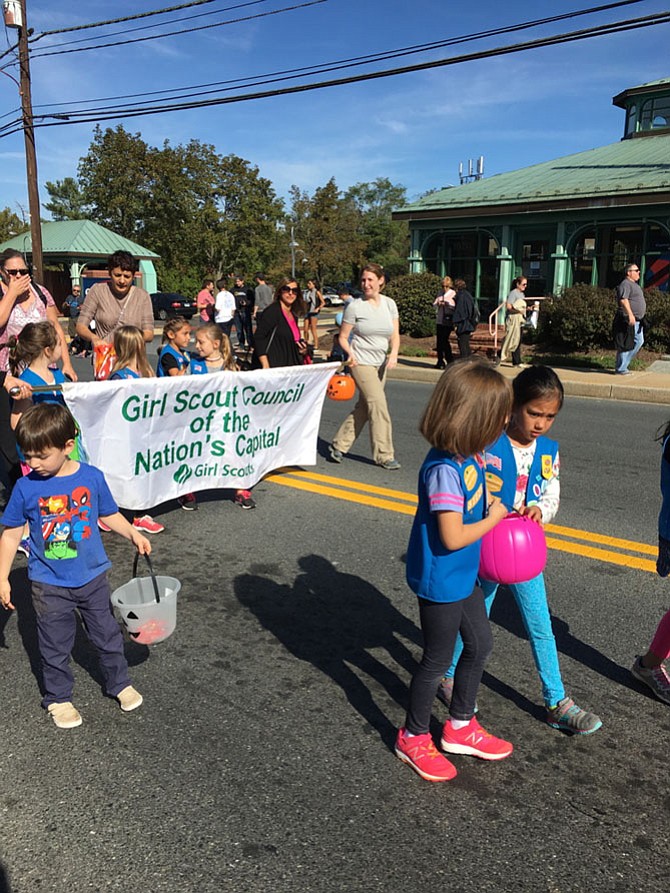 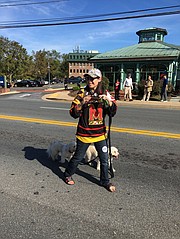 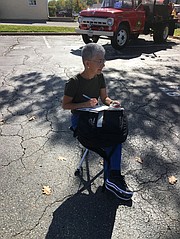 The day started with a parade featuring 70 units encompassing all of Potomac: schools, businesses, politicians, community groups, fire companies, more politicians, babies in strollers, and lots of dogs on leashes. All strolled down River Road from Potomac Elementary School to Falls Road before falling out of formation to enjoy activities set up in the shopping centers on both sides of Falls Road.

“It’s a political year so there are more candidates,” said Jennifer Matheson, from Potomac Chamber of Commerce, the day’s sponsor. “Politicians like to walk and wave.”

Walk and wave they did. The parade lasted close to two hours, but the weather was perfect and viewers seemed enthusiastic, especially the children who scrambled for candy treats thrown by parade participants.

“I’ve lived in Potomac for 45 to 50 years and I’ve been to a few [parades],” Phyllis Weltz said. “But the weather makes this the best parade ever. It’s good seeing my neighbors, people are so happy. It makes me feel good that I live here.”

Among those leading the parade were the Chamber of Commerce’s citizens of the year.

Harrison Smith, a senior at Landon School, is the Youth of the Year for 2017. Harrison is an excellent student, an athlete, musician and a self-avowed “science nut.” But he also helps the community by preparing Thanksgiving food baskets and working, with his family, at a women’s shelter. He has also helped many outside the area by volunteering by assembling care packages for victims of hurricanes Harvey and Irma.

Dr. John Sever was selected Citizen of the Year. Seaver, a long time Potomac resident who now lives in King Farm, was a driving force in getting the Rotary Club to adopt the eradication of polio in the world as part of its 3-H Health, Hunger and Humanity program. That was in 1978. His goal, and that of Rotary clubs, is very close to being achieved.

The Business Person of the Year award goes to James McWhorter and his wife Yasmin Abadian, owners of the former River Falls Market, now The Market at River Falls. McWhorter started Community First Day in which on the first day of the month 25 percent of the market’s proceeds go to a local charity.

Grand marshals, the Freishtat family, Rob and Jamie, plus children Luke, Max and Nate, are honored for their commitment to the people of Haiti.

Rob and Jamie, both physicians, became involved with the people of Haiti after the 2010 earthquake.

They immediately fell in love with the country and the people and have been back several times, Rob Freishtat told the Potomac Almanac in an earlier interview.

On one trip, in 2013, Rob Freishtat cared for an almost two-year-old boy abandoned in the hospital suffering from dehydration and starvation. During the weeks of hospital care, Rob became attached to the boy, Louiken, and the family decided to adopt him. Now known as Luke, he officially became a member of the family in December 2015.

As the parade ended, the usually busy intersection of River and Falls roads was quiet. Police had yet to open the roads to through traffic. Pedestrians crossed with ease as they made their way to the booths and activities set up in the parking lots of Potomac Village Shopping Center and Potomac Place.

Caroline Schneider, 14, and Caroline Kohler, 14, picked up their drinks and headed for the rides.

“It was good,” Caroline Kohler said. “I liked the free stuff: popcorn, candy and we got gift cards from Sprinkles Ice Cream.”

Caroline Schneider said she liked the Boy Scouts and Girl Scouts marching in the parade and the dogs and horses.