A look at the redevelopment plans across the west end of Arlington’s Metro corridor. 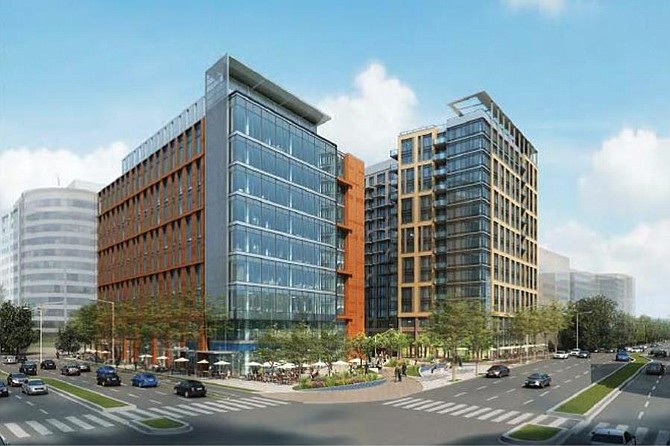 Three years ago, an open retail space in Ballston helped a dream for Javier Candon come true. His Spanish-style restaurant, SER, was born out of a competition held by the Ballston BID and a local developer for an open retail space, the winner getting a year in the location rent-free. Candon submitted his pitch and worked his way through a series of competitions.

Now, three years later, Candon has recently opened another location in Washington, D.C., and is eagerly awaiting the new developments across Ballston.

“We’re doing very well, but the location is challenging,” said Candon. “It’s a couple blocks away from the main section [of Ballston], but we’ve worked to become a destination.”

As new development comes into the area, Candon is mostly excited. SER is located next to the Newside development. Though the apartments are luxury units, Candon says the restaurant's rent has managed to stay under 10 percent of their total sales. The new development has also brought new regulars to his restaurant.

One of the greatest strengths for Candon, however, is also one of his greatest concerns about the future of Ballston development. Being a few blocks removed from the Ballston Mall redevelopment has helped keep the rent on SER low, but Candon says he’s concerned the new mall will be the focus of the public spotlight and visitors won’t want to walk five blocks away to explore other restaurants and retail in the area.

Ballston is about a five-block radius around the Metro station. But on nearly every single block, new construction is underway on towering new skyscrapers and dense new developments. The Ballston of 2020 is already starting to take shape.

Much of the redevelopment is being planned or coordinated through the Ballston Business Improvement District (BID), a five-person team that works on branding, marketing and administration of local businesses. The BID is funded by a tax of $0.045 per $100 of assessed value for businesses within the district. In FY 2017, the BID collected $1.6 million in tax revenue and $550,000 in fund raising, according to a work plan submitted to Arlington County. Ballston BID CEO Tina Leone provided a tour of the new developments.

The latest development completed in Ballston is the two luxury buildings finished over the summer, collectively called Newside. The two buildings are located at the former Blue Goose site on Marymount University’s Ballston campus in the northwest corner of the neighborhood. The southern building is a nine-story mixed office and retail building with 55,067 square feet of office space. The other is a 15-story market rate apartment building with 267 units.

The redevelopment starts as soon as the visitor steps off the Metro. A map of the surrounding area with featured locations was recently installed in the Metro plaza, the harbinger of a series of changes planned for the site. The dark plastic awning over the Metro station exit will be renovated and lit. Ballston Metro serves as a hub for bus traffic in the area, and additional bus bays, new bus shelters, and signs with real-time bus information will be added to the site by 2019. New kiss-and-ride curb space and bike parking will also be added to the site.

Across Fairfax Drive from the Metro station is the Central United Methodist Church (CUMC), a church showing its age with cracked paint and some busted wood along the front facade. But the church is slated for redevelopment as a new mix of church and residential building with 40 percent of the new units dedicated affordable housing.

Further east on Fairfax Drive sits Carpool, once an iconic local restaurant built out of an old car dealership, now closed and fenced up. The lot is relatively small, but will feature a tall, skinny apartment tower with 330 units and retail on the ground floor.

At the northeast corner of Ballston, a proposed black box theater space is in development limbo. Plans to put a theater space at 3901 North Fairfax were replaced with more office space, but Leone said office vacancy challenges across the region have put the project in jeopardy.

There are two site plans approved for 4040 Wilson Blvd. One would be almost entirely office and would make the building the tallest office building in Ballston. The other would include office, but would also include retail and residential space, becoming Arlington’s first vertical fully mixed use development.

On the next block of North Glebe, a six-story development called 672 Flats will add 175 new residential units and 4,400 square feet of retail space. Leone said the project is substantially smaller than its Saul Centers development neighbor, following the trend of residential and retail spaces getting smaller the further they get from the central Metro corridor.

The biggest vacancy hitting Ballston in the next year is the loss of the National Science Foundation, formerly located in the Ballston Exchange, but moving to a new location in Alexandria. Office vacancy has been trending down in Ballston as vacant space has filled, but Leone says those statistics haven’t accounted for NSF’s departure which is already underway. Leone says the Ballston Exchange’s developers have been looking for ways to renovate and modernize the space. In late 2018, the site is planned to be renovated as a new 776,000 square feet development with mixed-use retail, a fitness center, and a conference facility. Currently the site is set back from the street with a fountain, but Leone said the new development will bring the retail out to the street and replace the fountain-area with a courtyard.

Across from the Ballston Exchange, one of the most visible redevelopment projects has been the Ballston Common Mall. The front facade of the project is currently being torn down, exposing the long-enclosed interior to the street. The new plans for the mall will be a town center type design that includes stores that face both the street and an interior, open-air courtyard. The project will include 393 apartment units and four levels of underground parking.

When she lived in Ballston 17 years ago, Leone said there weren’t any strollers or dogs on the streets. Ballston was a place where young professionals worked, with the only retail or restaurants catering to the local nightlife. But now, Ballston’s streets are packed with dogs and strollers. The average Ballstonian is a college graduate under 40 making around $175,000 a year. Ballston’s young professionals from two decades ago grew up, and many of them stayed in the area, and the new developments in Ballston are a reflection of that. One of the types of facilities in need in Ballston is child-care, and Leone says the BID has been courting those types of facilities for new developments. The only one currently planned is included in the CMUC development.

Leone said one of the biggest trends across the new developments in Ballston is that all of them have ground floor retail. Of the ground floor retail planned for Ballston, 30 percent is restaurants. According to Leone, the current trend for retail is chasing experiences rather than conventional shopping, which has been decimated by the internet.

“People want experiences,” said Leone. “Everything has to be Instagram worthy.”