Local firefighters raise $131,278.65 in disaster relief, then rush to hurricane path of destruction on search and rescue mission. 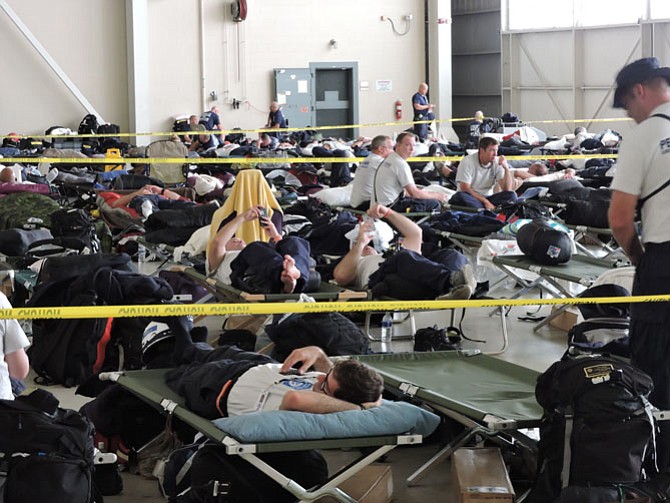 Urban search and rescue crews nationwide rest in a hangar in the heart of Georgia Friday, Sept. 8 at Robins Air Force Base prior to boarding military transport planes to Hurricane Irma disaster zones in Florida and the Caribbean.

A canine specialist from the Fairfax County Urban Search and Rescue team in Chantilly walks her dog Friday, Sept. 8 as a semi hauls in equipment from New York to Robins Air Force Base in Central Georgia — a staging area for relief workers across the country waiting for a catastrophic storm to pass Puerto Rico so they can start search and recovery efforts in Hurricane Irma’s path of destruction.

his boot around 4 p.m. Sept. 4 while Master Technician Johnathan Macquilliam flashes a smile at motorists stopped by a red light in Fairfax on Waples Mill Road and Lee Jackson Memorial Highway.

They worked on Labor Day with nearly a dozen firefighters from Station 21 in Fair Oaks to collect $3,157.84 in one afternoon for a local chapter of the Muscular Dystrophy Association.

Motorists in Springfield, however, were most generous Sept. 2 to Franconia firefighters — who raised more money in a single day than any of the county’s 38 stations, points out Joel Kobersteen, Fairfax County coordinator of the annual MDA “Fill the Boot” campaign. He is a master technician at Station 40 in Fairfax Center and drives a fire truck called Engine 440.

FRANCONIA FUNDRAISERS received a good soaking that Saturday from the remnants of Hurricane Harvey as it blew through the Commonwealth. Nonetheless, other passers-by rained dollar bills on Station 5 first responders and filled their boots with $28,251.99. 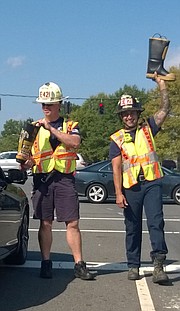 MDA Greater Washington, D.C., plus $131,278.65 for the International Association of Firefighters disaster relief fund. It distributes aid to union members, who lose their homes and personal belongings while they work around the clock to save lives whenever disaster strikes.

Kobersteen said Burns was deployed last week with the Fairfax County Urban Search and Rescue team in Chantilly — known worldwide as Virginia Task Force 1. At least half of the 14 crew members who returned last week from Texas barely had enough time to hug their kids, kiss their spouses, regroup then mobilize with another VA-TF1 rotation headed south to Robins Air Force Base.

This logistics center in the heart of Georgia has offered space as a staging area for several nationwide search and rescue teams ready to work in Hurricane Irma’s path of destruction. Roland Leach, chief of media relations at Robins, said he saw the VA-TF1 crew load their search and rescue dogs plus the rest of their gear last week into a large C-17 cargo plane.

“They had a semi-trailer full of emergency equipment, generators and boats,” Leach recalled. He said the task force flew to Puerto Rico once the storm had passed. Burns serves his unit on this rescue and recovery mission as an operations chief.

According to a Sept. 10 video update from task force leader and assistant fire Chief Chuck Ryan, VA-TF1 stopped in San Juan and was carried Sunday by the U.S. Coast Guard aviation assets to the Virgin Islands.

“The team will be there for an undetermined amount of time to conduct search and rescue activities on the island of St. Thomas and the other U.S. Virgin Islands as needed and as directed by our federal partners,” Ryan said Sunday.

BY TUESDAY, the task force counted eight team members in Key West, Fla., 38 relief workers in Puerto Rico and a crew of 36 on St. Thomas. A U.S. Department of Defense news release Monday stated coordinated military operations evacuated in three days 1,904 American tourists stranded in the Caribbean during Hurricane Irma — which started raking their tropical paradise Wednesday, Sept. 6 with strong Category 5 winds up to 185 miles per hour, according to National Hurricane Center bulletins.

Follow the rescue efforts of VA-TF1 online through the Fairfax County Fire and Rescue website at www.fairfaxcounty.gov/fr and the team’s other social media platforms.