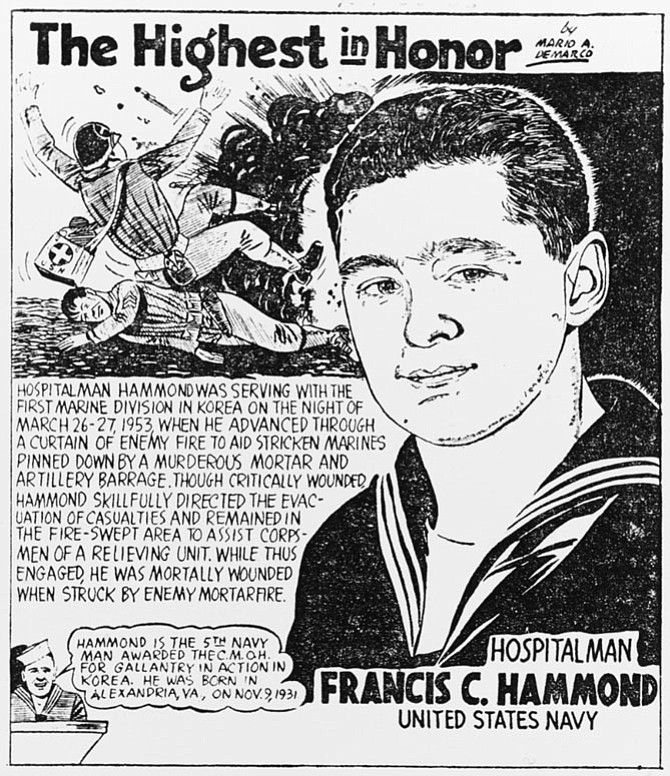 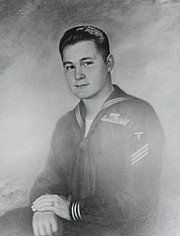 Citation: For conspicuous gallantry and intrepidity at the risk of his life above and beyond the call of duty as a HC serving with the 1st Marine Division in action against enemy aggressor forces on the night of 26-27 March 1953. After reaching an intermediate objective during a counterattack against a heavily entrenched and numerically superior hostile force occupying ground on a bitterly contested outpost far in advance of the main line of resistance, HC Hammond's platoon was subjected to a murderous barrage of hostile mortar and artillery fire, followed by a vicious assault by onrushing enemy troops. Resolutely advancing through the veritable curtain of fire to aid his stricken comrades, HC Hammond moved among the stalwart garrison of marines and, although critically wounded himself, valiantly continued to administer aid to the other wounded throughout an exhausting 4-hour period. When the unit was ordered to withdraw, he skillfully directed the evacuation of casualties and remained in the fire-swept area to assist the corpsmen of the relieving unit until he was struck by a round of enemy mortar fire and fell, mortally wounded. By his exceptional fortitude, inspiring initiative and self-sacrificing efforts, HC Hammond undoubtedly saved the lives of many marines. His great personal valor in the face of overwhelming odds enhances and sustains the finest traditions of the U.S. Naval Service. He gallantly gave his life for his country.

It was 65 years ago on March 27 when Francis C. Hammond Middle School’s namesake, a young Alexandria man, performed “great personal valor in the face of overwhelming odds” while taking care of wounded members of the 1st Marine Division in South Korea.

Hammond was born on Nov. 9, 1931 to Harry and Elvira Hammond, in Alexandria. Harry Hammond worked at a pharmacy, and after high school Francis joined him, planning to become a pharmacist.

Francis decided to enlist, joining the Navy. First, he headed off to the Navy’s Hospital Corps School in Great Lakes, Ill. Once a medic, he proceeded to California for more training. Anticipating he would be sent to Korea, Francis married his girlfriend in June 1952. The following year, Feb. 1, Hospital Corpsman 3rd Class Hammond was assigned to the 1st Marine Division in South Korea.

On the night of March 26, Hammond and the 1st Marines were trying to retake Combat Outpost Reno, which the North Koreans had overrun earlier that day. The Marines encountered heavy mortar and artillery fire as they neared the outpost.

“We kept going forward and finally gained posts in a small shallow trench,” said Marine Sgt. William R. Janzen from a series of articles collected by B.J. Sullivan, a librarian at the school which bears Hammond’s name.

Undeterred and undaunted by the mortar and artillery fire, Hammond got to work.

“He was all over the place patching up the wounded, no matter how slight their wounds,” Janzen remembered. “Even after he himself was wounded he continued moving about the area, ignoring his own wounds, and giving as much aid and comfort to the other wounded as he possibly could under the circumstances.

“The bravest man I saw out there that night was Corpsman Hammond.”

As a relief unit showed up, Hammond’s division was ordered to pull back. Hammond refused. According to the Virginia War Memorial’s website, “[he] did not want to leave his men, so he stayed behind to help evacuate the wounded, refusing care for himself. While assisting the units relieving them, [Hammond] was mortally wounded by enemy mortar fire.”

Four months later, an armistice would end the conflict.

For his actions, Hammond posthumously received the Purple Heart and the Medal of Honor. His Medal of Honor citation concludes, “By his exceptional fortitude, inspiring initiative and self-sacrificing efforts, HC Hammond undoubtedly saved the lives of many Marines. His great personal valor in the face of overwhelming odds enhances and sustains the finest traditions of the U.S. Naval Service. He gallantly gave his life for his country.”

The Francis C. Hammond High School, which opened in 1956, was named in his honor. Now a middle school, “the school crest (donated by the Class of ‘62) still graces the floor of Hammond’s central hall with the motto ‘Vivat Academia’ (Long live Academics) and is protected by four sparkling brass 3-inch .50 caliber ammunition shells (simulated) donated by the U.S. Naval Weapons Laboratory, Dahlgren, Virginia,” according to a city of Alexandria website. There is also the Francis Hammond Parkway, a street in Alexandria lined with tidy brick homes.