Cougar Robotics will compete against 400 teams from all over the world at the FIRST Championship in Detroit, Mich. April 25-28. 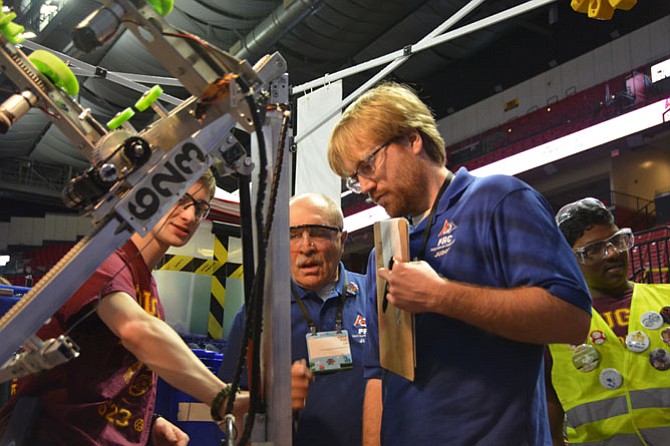 For 17 years, Oakton High School has been blessed with the Cougar Robotics STEM Club. The club competes in a world-wide competition called FIRST (For Inspiration and Recognition of Science and Technology). The club is made up of 29 students, ranging from freshman to seniors. Each January a new season begins with a new game challenge for the Club. The Cougar Robotics teams had six weeks to design, build and program a brand new robot to meet the 2018 FIRST Power Up challenges. The students are interviewed by judges at each competition, giving them the opportunity to show off their robot, programming, and team skills.

The Cougars have battled it out in both Virginia and Maryland, winning the FIRST Chesapeake Southern Maryland Tournament. The programming team was rewarded for their hard work with the Innovation in Control award, which celebrates an innovative control system or application of control components – electrical, mechanical, or software – to provide unique machine functions for their “Cougar Operative Board.”

During Spring Break, the Cougars battled it out against 60 other teams from Virginia, Maryland and DC at the District Championship. Finishing among the top teams and winning the Quality Award for their robot Samus Lakitu, Oakton's Cougar Robotics team secured their spot to compete against 400 teams from all over the world at the FIRST Championship in Detroit, Mich. April 25-28. Tens of thousands of students will compete on the world stage at the FIRST Championship presented by Qualcomm Inc.

With all the heart-pounding thrills and team spirit of a professional sporting event, FIRST uses robotics as the backbone for the “only sport where every kid can go pro.” Guided by mentors and STEM professionals, and supported by FIRST Sponsors, FIRST teams inspire kids in grades K-12 to explore the innovation process and build STEM and digital-literacy skills.