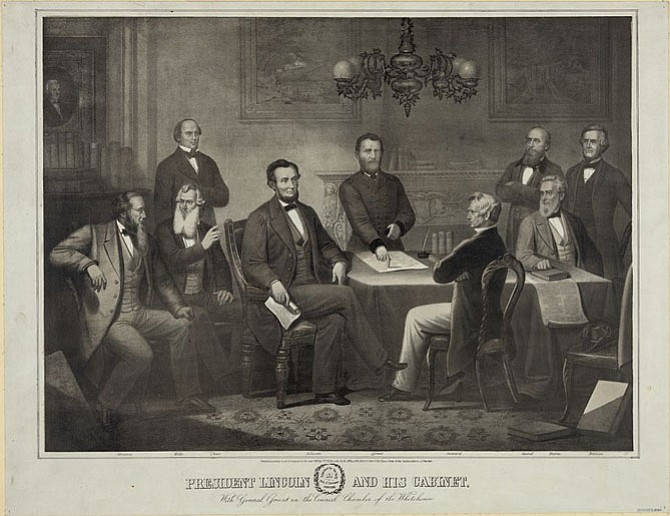 President Abraham Lincoln and his cabinet at the White House discussing the draft Emancipation Proclamation. Photo courtesy of Library of Congress

On Jan. 1, 1863, President Lincoln signed the Emancipation Proclamation freeing all the enslaved blacks in Union-controlled areas.

The Virginia Restored Government led by the provisional governor, Francis H. Pierpont (Pierpoint) who declared Alexandria as the capital of Virginia during the Civil War, voted to emancipate all the slaves in Virginia under Union rule on April 7, 1864. When the Union took over other counties in Virginia, each county emancipated their slaves. One year later, the Federal government declared victory and slavery officially ended with some resistance by the lower southern states against the Union.

For 50 years, African Americans in Alexandria celebrated Emancipation Day. Prominent African Americans of that era organized parades and had speakers. Those celebrations did not take place on the actual anniversary date of Alexandria’s Emancipation Day, but on different months of the year, for example: it was celebrated in January for the following years 1890, 1891, 1900 and 1901; celebrated in May 1905; and it was celebrated in September for the following years 1893, 1895, 1896, 1903 and 1910. What was consistent was that every year for 50 years, the African Americans in Alexandria celebrated their freedom in ceremonies throughout Alexandria by displaying President Lincoln’s picture in their parades, at their banquets and at their conferences. The conferences usually centered on different topics for that years’ celebration, for example: accomplishments of the colored race since Emancipation Day, voter registration, adequate schools for colored people, adequate housing and community involvement.

During those early emancipation ceremonies, the Emancipation committee sent invitations to well-known speakers. Some of the speakers over the course of those 50 years of celebrations included: the Honorable Frederick Douglass, Congressman John M. Langston, Booker T. Washington, Colonel John M. Hay, ministers from Alexandria and Washington, D.C.; and many other prominent dignitaries of that era.

Alexandria has a unique documented history about the emancipation of enslaved African Americans in Alexandria. This history should be preserved for generations to come, so that they can learn about the struggle of enslaved people.

Happy Emancipation Day to all of the people whose enslaved ancestors came to Alexandria for their freedom and experienced the jubilation of freedom.