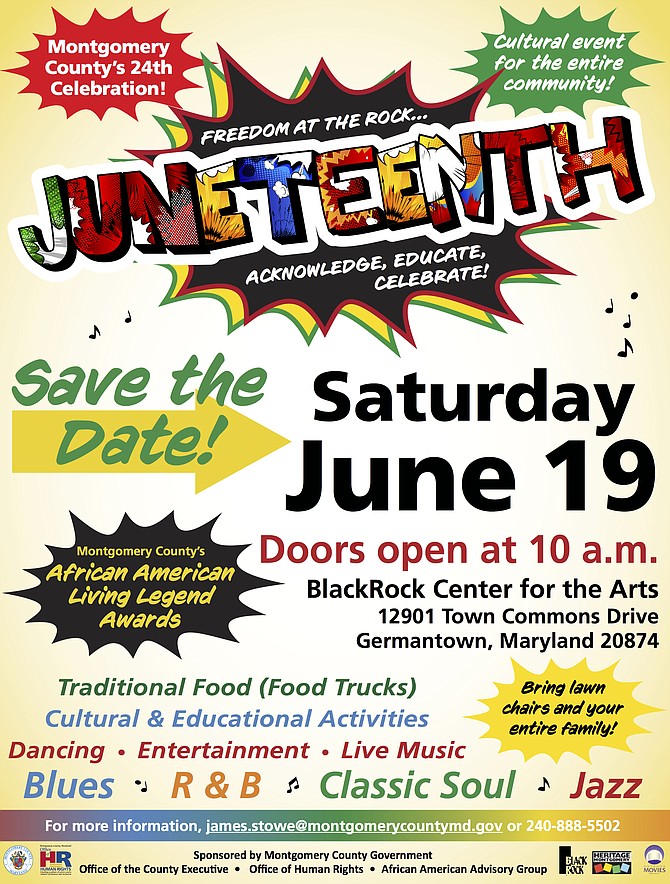 Montgomery County’s 24th Juneteenth Celebration will be held at the BlackRock Center for the Arts located at 12901 Town Commons Drive in Germantown from 10 a.m. to 10 p.m. on Saturday, June 19.

The event will feature traditional events like the award recognition ceremony and Juneteenth inspired food. This year’s theme “Freedom at the Rock … Acknowledge, Educate, Celebrate,” traces the African American struggle for freedom through education, art, dance, music and honoring our elders.

New this year, the festivities will also include educational activities, a historical journey of African American Music and artistic entertainment, and food trucks, all designed for the whole family. Activities will take place both inside and on the lawn of the arts center.

The Montgomery County Office of Human Rights and the County Executive’s African American Advisory Group are coordinating the program with special support from BlackRock Center for the Arts to commemorate the 156th anniversary of the events of June 19, 1865. On that day, Union General Gordon Granger and 2,000 federal troops arrived in Galveston, Texas to take possession of the state and enforce the emancipation of its enslaved persons. The event today is known as Juneteenth and is celebrated widely across the United States.

The African American Living Legend Awards will honor distinguished individuals who are living legends in Montgomery County and have helped shape the cultural heritage of the African American community. The honorees have dedicated their lives to service and excellence, with accomplishments in areas including business, health, media, sports, education, law, ministry, community organizations, medicine or politics.

“The end of slavery not only meant freedom for a people, it meant freedom for a nation, however, nothing is guaranteed; as we see efforts at voter suppression nationwide, confrontation with law enforcement and excessive force issues for black and brown people, social justice crisis and an attempted insurrection and end of our democracy,” said Office of Human Rights Director James Stowe.