A ‘High-Spirited and Entertaining’ Show in Clifton
Votes

A ‘High-Spirited and Entertaining’ Show in Clifton 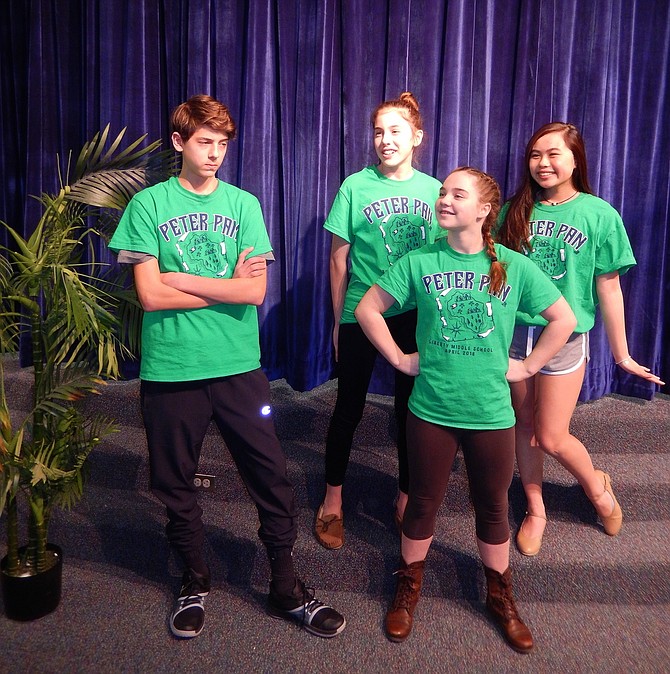 Adventurous children, pirates and a boy who can fly are among the delights in store for people attending Liberty Middle School’s upcoming play. It’s the Broadway version of the musical, “Peter Pan Jr.”

Show times are Thursday, Friday and Saturday, April 26, 27 and 28, at 7 p.m. Tickets are $6 at the door and during school lunches, starting April 18. And the cast and crew of 60 have been rehearsing since October.

Director/Choreographer Jody Scott says her actors are not only “talented, smart and take direction well, but they also look out for each other and work together as a team. They’re a happy group of kids and are all ready and excited to perform this show.”

She also praised Music Director Gary Verhagen and Costume Coordinator Laura Bellis for their efforts, saying, “They’ve generously given of their time to do whatever’s needed to help put on this play, but they love it.”

It takes place in the early 1900s. Peter is a boy who never ages and grows up, but he longs to have a mother and someone who’ll take care of him and tell him stories. So he visits the home of the Darling family, whose mother reads stories to the children.

But he’s also mischievous, so he convinces the children to fly to Neverland with him and says the oldest one, Wendy, can be their mother. There, they encounter Capt. Hook, the Lost Boys, Brave Girls and a crocodile, and the adventure unfolds.

“This show is high-spirited and really entertaining,” said Scott. “And the musical numbers are upbeat, toe-tapping and happy; people will leave with the songs in their heads. The pirates are hysterically funny, the Brave Girls are strong and smart, and everybody can see themselves in the Lost Boys, who love to have fun. The Darling children are eager to have an adventure, Capt. Hook is a commanding presence onstage and our Peter Pan really embodies the role.”

The scenes take place in the Darling children’s London bedroom, in Neverland forest, in the Lost Boys’ underground home on Neverland Island and on a pirate ship. Peter Pan wears a forest-green outfit with matching tights, and Capt. Hook wears a velvet jacket with lace shirt sleeves, a red-velvet hat with white plume and a long, curly, black wig. The Lost Boys have scruffy clothing, the Brave Girls are in earth tones and the pirates have beards and mustaches and wear bright, jewel-tone colors.

Portraying Peter Pan is seventh-grader Katie Wood. “He’s very stubborn and doesn’t like people telling him what he needs to do,” she said. “He’s energetic and, when he’s excited about something and puts his mind to it, he gets it done. He’s friendly and outgoing, but hard to approach, because he thinks he’s the best and is in charge of everyone on Neverland. So he has the power and responsibility.”

Katie says it’s fun playing someone “as energetic as I am. He also puts on many, different personalities and faces. And it’s fantastic having a lead role — I really love it. I’m happy Ms. Scott gave me the chance. In the end, I’m going to be proud of how hard we all worked to make this show amazing.”

Her favorite number is “I’m Flying,” which she sings with the Darling siblings, Wendy (Madison Bui), Michael (Caitlyn Barnes) and John (Kaitlyn Briest). “I love the choreography because we get to sing on the railings, and it’s a blast to do it with all my best friends,” said Katie. “It’s really cheery, and Peter’s saying how magical and dreamy it is to fly.”

She said the audience will like the story’s adventure and suspense and the cast’s energy. “They’ll also enjoy all the musical numbers and the choreography and how everyone portrays their characters in ways that make them unique,” said Katie. “And during the play, many of the characters change the way they feel.”

Eighth-grader Joseph Buono plays Capt. Hook. “He doesn’t like children, or even his pirates,” said Joseph. “But he needs people to help take care of him, so he forces them to work. He’s angry and mean because Peter Pan has been getting in the way of his business. He’s also English, so he’s proper and thinks he’s better than everyone else.”

Joseph’s having fun because acting is something new for him. He also likes his part because “Capt. Hook is the villain, has enemies, is smart and witty and has a big role. And I like singing ‘Hook’s Waltz.’ It has a variety of tones and it tells a little about his personality.”

He said people will enjoy the show’s action and fights, plus the “sad and happy scenes, the songs and the very talented actors. And they’ll love all the characters.”

His sister, seventh-grader Beth Buono, portrays Tiger Lily, who lives on Neverland. “She’s a brave, strong, serious, independent, young lady,” said Beth. “She likes being in control of the Brave Girls. They stick together and she’s happy about it. I auditioned for this role because she’s more focused on protecting others, although she usually doesn’t get to have as much fun as they do.”

Beth especially likes the song, “Ugh-a-Wug,” which she sings with Peter Pan. “It’s a chance for Tiger Lily to have more fun, get out of her comfort zone a little and become one with the Lost Boys and Brave Girls,” she said. As for the show, she said, “The audience will really like our facial expressions, movement, dancing and singing, plus the comedy.”

Playing Wendy is eighth-grader Madison Bui. “She’s 14 and from an aristocratic family, so she starts off as proper,” said Madison. “But then she goes off with a bunch of boys and learns to let loose and become motherly toward them. She has a lot of mood changes. She idolizes her mother and wants to be a mom. She’s sweet and gentle with the Lost Boys and is boy-crazy over Peter, but in a subtle and mature way.”

Madison enjoys her role because “I feel like she’s the most dynamic of all the characters. She goes from being uptight, prim and proper, to someone who can have fun, go with the flow and be more optimistic.”

Her favorite number is her solo, “Tender Shepherd,” the nighttime lullabye of Wendy and her brothers. “It’s mellow and soothing and carries a lot of meaning,” said Madison. “We’re inviting the audience to see it and share our lives.” Overall, she said, “This show is about kids who don’t want to grow up, and it’s touching and heartfelt. It’s also humorous and lighthearted, and all ages will enjoy it.”